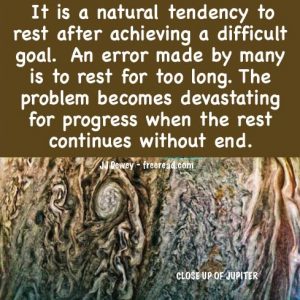 Question: You say the Jesus may have to face his Dweller ONE more time. But from the rest of your explanation it sounds like we each must face our Dweller every lifetime, as the Dweller never dies. I guess the question is: Is it possible to defeat our Dweller permanently?

JJ: When the entity passes the personal need to incarnate as a child then he is no longer affected by his personal dweller. But even here he will face a dweller of a different nature as did the Christ when he faced the planetary dweller. As an entity goes through the various cycles he will meet a higher or lower correspondent to the Dweller.

When the Dweller is defeated he will normally be out of the disciple’s life for that lifetime. The exception could occur if the seeker backslides and goes against the light he has received. This would be rare for a person who has gone this far.

A reader gives this quote from DK:

“That thoughtform created by a man since his first appearance in physical form, and called the ‘Dweller on the Threshold!’ Being created by the lower personal self and not by the soul, it is impermanent and is simply held together by the man’s lower energy. When the man begins to function as the soul this “image” he has created, through his “fancy” or his reaction to delusion, is dissipated by a supreme exertion. It has no real existence once there is nothing in the aspirant to feed it, and the realization of this enables him to free himself from its thralldom.” Light of the Soul, Page 21

This does not contradict anything I have said about the Dweller. It is his body which DK is referring to which is the impermanent creation of the personality. But the principle to keep in mind is this. All form is impermanent but there is life in and through all things and all life is eternal and going through the process of evolution.

The question was asked that if it was Gabriel who appeared to Mohammed then how could DK be correct in saying that it was Jesus who overshadowed him? The answer is simple. Gabriel was one of the Kumaras from Shamballa initiating the mission and Jesus was the Master doing the work of guiding Mohammed through his mission.

Question: So then why did Jesus ask for forgiveness for those that crucified him from a God that planned the crucifixion all along and is never offended at anything?

JJ: To murder the innocent is a great sin against the light and creates a dark barrier between their souls (the Son) and the Monad (the Father).

The soul (the Son) must guide the wayward individuals through the darkness toward the light of the Monad. This is the path of the great rebirth, the turning around, or forgiveness that even the worst of humanity must eventually achieve.

All of us must be forgiven by ourselves. The Son within must petition to the Father (monad) to bring us the peace that lies in true forgiveness.

Question: Have you read or heard of “The DaVinci Code”? If so, what are your thoughts on it? Is there such a code?

JJ: Yes. I found it to be a good story while at the same time presenting a good argument for one of the greatest mysteries of history.

If you liked this book you should read Holy Blood Holy Grail which first introduced a factual historical quest for the mystery. In addition to there are several more recent books on the subject.

I believe (but have not received 100% confirmation) that Jesus was not legally married but that he had a committed relationship with Mary Magdalene.

“If he looks backward he can see only the fogs and miasmas of the planes of illusion, and fails to be interested. If he looks forward he sees a distant light which attracts him, but he cannot as yet see that which the light reveals. If he looks around, he sees but shifting forms and the cinematograph of the form side of life. If he looks within, he sees the shadows cast by the light, and becomes aware of much impedimenta which must be discarded before the light he sees in the distance can be approached, and then enter within him. Then he can know himself as light itself, and walk in that light and transmit it likewise to others.” DK , A Treatise on White Magic, Page 61

For some time now the spirit of this time of year has been affecting me more than usual. It happens whenever someone sings a Christmas carol about Christ such as Hark the Herald Angels Sing or Joy to the World.

It seems that each year the intensity of the experience increases.

This year it happened as I was doing some shopping. First I passed a bell ringer and entered a food co-op I frequent. After I was inside a few moments four Christmas carolers came inside and started singing. As they sang my heart burned with greater intensity than it did the year before. The Presence came to me with great power and love and said: “I am near, very near, as is the day of my appearance. Let your faith be renewed… The day draweth near.”

How near is difficult to say from my perspective, but from looking at it with the idea that the promise is around 2000 years old, several decades hence would yet be very near. Yet at the time the coming of the Lord seemed to be in the now. This is because the Spirit always speaks from the point of the eternal present and thus God, when felt, is nearer than any other life.

Even so, I felt the meaning of the message was more than this, for I already have an approximate idea of when certain events will arrive. Instead I sensed the main purpose of the affirmation was to strengthen my faith in the work in which we are engaged in preparing for the reappearance of the Christ.

The problem with a work that requires faith and endurance is that there is a natural tendency, after a period of time, to view the struggle as if it were an academic thing. But then when one is reminded of the reality behind the ideal it is as if an awakening occurs.

Christ is indeed real. The entity who has the position of Christ is real as is the Christ which is in each of us.

For us to be as real as the Master we must see the Christ in ourselves, each other, and humanity as a whole.