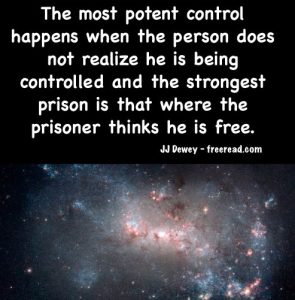 Our Crème acolyte gives us a quote from DK that will be unnerving to some free enterprisers. He gives it as evidence that Benjamin Créme is correct in his socialistic/communistic teachings.

“The principle of barter and of exchange (to the benefit of all concerned) will control. – Owing to the development of atomic energy on behalf of human welfare, national currencies will have been largely superseded, not only by a system of barter but by a universal monetary exchange – representative of the bartered goods when they are relatively small and unimportant – and by a planned scale of related values. National material assets and the needed commodities will all be provided for under an entirely new system. – Private enterprise will still exist, but will be regulated; the great public utilities, the major material resources and the sources of planetary wealth – iron, steel, oil and wheat, for instance – will be owned in the first place by a governing, controlling international group; they will, however, be prepared for international consumption by national groups chosen by the people and under international direction.” Externalisation of the Hierarchy, Page 581

If one reads this and nothing else he would think that DK is indeed on the side of socialism and government control. I will admit that of all his writings this, taken by itself is perhaps the most disturbing which sounds like a socialist plan similar to what Hitler had in mind, which brings us to an important consideration.

Suppose DK, the Bible or some trusted teachers says something that just flat out disagrees with a principle understood by my soul? What do I do then? Do I acquiesce my reason and understanding and just blindly accept?

Do I totally reject it then?

You go by the highest you know and at the same time give weight to the earned authority. You consider that you may have misunderstood the words or are missing pieces to a greater understanding.

That said we must ask if DK is taking the side of socialism or even communism here?

When Hitler came to power there were quite a number of psychics, teachers and spiritual leaders who not only tolerated him but almost embraced him. Today we see the evil behind Hitler as an obvious thing, but evil is not so obvious when it is on the rise. DK, from the beginning saw Hitler for what he was.

“In the world order of the Axis powers, the individual has no rights; he has no freedom except in so far as he serves the state; there will be no liberty of thought or conscience, all issues will be decided by the state, and the private citizen will have no right to an opinion. Men will be drafted like slaves into the service of the state.

“Such is the picture of the order which the Axis powers are preparing to impose upon the world, and to this their own words testify. Only insight into the true nature of this crisis, a determination to face the facts, and fearlessness will suffice to defeat Hitler. “This conquering fearlessness must be based on a recognition of the spiritual values involved, on a belief in God, and on a commonsense which is determined to establish security, right human relations and liberty.

“It is important that people face up to the facts immediately. They must realise what is the nature of the world order which Hitler is preparing to enforce, and what lies ahead of humanity if the Axis powers triumph. It is essential that the little children of the world be rescued from this overshadowing evil and from the false education to which they will be subjected if the totalitarian powers hold Europe in their grasp.” Externalization of the Hierarchy, Pages 188-189, April 1940

Then after the war instead of speaking favorably of communist Russia he criticized it as repressive, separative and totalitarian.

Her correctly teaches that we are headed toward a one world government. There is no getting around this product of evolution. Instead of decrying and resisting this movement what must happen is that the lights of the earth must participate in it to insure that the principle of freedom is upheld. Think of it. If the lights stay on the sidelines waiting for some rapture then the future government will be planned and executed by selfish materialists who do not have the good of the whole at heart.

When the United Nations was established DK acknowledged that it carried the seed of the future, but also saw an alarming danger. He said:

“The United Nations is still the hope of the world and can remain so; it is a great field of experimentation, but is suffering today from an initial error. That error was the admitting of a totalitarian power into its nations. For seven long and terrible years the Forces of Light had been fighting totalitarianism. In the early days of the post-war period the Nations compromised with principles and admitted Russia to the United Nations. Had they proceeded to unite all the other nations of the world on the sure ground of economic reform, of needed national reorganisation and of regional groups (a better term than “blocs”), Russia would have been forced to conform, for her very existence would have been at stake. An initial error can lead to much trouble, and it is this type of trouble which the United Nations today faces.” Externalisation of the Hierarchy, Page 640 – April 1948

His hope was thus for a United Nations of the free countries of the world and excluding the totalitarian ones until they reform. This danger still exists within the U.N. even though Russia has underwent significant changes. The idea has been to include all nations no matter what their human rights record and thus the problem with the U.N. of over a half century ago still exists today.

DK thus stood up for freedom and common sense by endorsing power in the hands of the free nations and coming out against Hitler and other tyrants.

Concerning the future world government he said that it would include the best ingredients of the east and the west and of socialism and capitalism.

He gave nine points that he considered desirable for future government. Keep in mind this New World Order he speaks of is the one we are living in now, for he wrote this right after the War.

“1. The new world order must meet the immediate need and not be an attempt to satisfy some distant, idealistic vision.

“2. The new world order must be appropriate to a world which has passed through a destructive crisis and to a humanity which is badly shattered by the experience.

“3. The new world order must lay the foundation for a future world order which will be possible only after a time of recovery, of reconstruction, and of rebuilding.

“4. The new world order will be founded on the recognition that all men are equal in origin and goal but that all are at differing stages of evolutionary development; that personal integrity, intelligence, vision and experience, plus a marked goodwill, should indicate leadership. The domination of the proletariat over the aristocracy and bourgeoisie, as in Russia, or the domination of an entrenched aristocracy over the proletariat and middle classes, as has been until lately the case in Great Britain, must disappear. The control of labour by capital or the control of capital by labour must also go.

“5. In the new world order, the governing body in any nation should be composed of those who work for the greatest good of the greatest number and who at the same time offer opportunity to all, seeing to it that the individual is left free. Today the men of vision are achieving recognition, thus making possible a right choice of leaders. It was not possible until this century.

“6. The new world order will be founded on an active sense of responsibility. The rule will be “all for one and one for all.” This attitude among nations will have to be developed. It is not yet present.

“7. The new world order will not impose a uniform type of government, a synthetic religion and a system of standardisation upon the nations. The sovereign rights of each nation will be recognised and its peculiar genius, individual trends and racial qualities will be permitted full expression. In one particular only should there be an attempt to produce unity, and that will be in the field of education.

“8. The new world order will recognise that the produce of the world, the natural resources of the planet and its riches, belong to no one nation but should be shared by all. There will be no nations under the category “haves” and others under the opposite category. A fair and properly organised distribution of the wheat, the oil and the mineral wealth of the world will be developed, based upon the needs of each nation, upon its own internal resources and the requirements of its people. All this will be worked out in relation to the whole.

“9. In the preparatory period for the new world order there will be a steady and regulated disarmament. It will not be optional. No nation will be permitted to produce and organise any equipment for destructive purposes or to infringe the security of any other nation. One of the first tasks of any future peace conference will be to regulate this matter and gradually see to the disarming of the nations.” Externalisation of the Hierarchy, Pages 190-191

Number 8 sounds a little like the quote our friend gave.

Question: What is right/wrong – good/bad about capitalism/free enterprise and socialism/communism as they have existed in the last century?

What must be left behind and what must we take with us to the future?