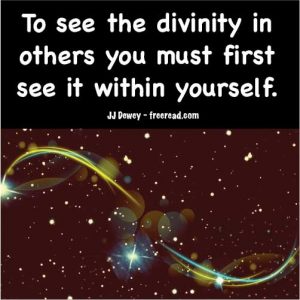 Thought I would post my response to fairly new reader. Some people read the first Immortal book and get very enthused until they discover some of the teachings which run contrary to orthodoxy. Since this occurs periodically and may happen with some of your friends I thought I would make available this dialog.

Reader: I found the dialog in your book with John the Revelator interesting but do not see him saying anything in your other writings, such as those about reincarnation which is a false doctrine. What gives?

JJ: Reincarnation and the Bible was written by me back around 1980. The Immortal series (which you have read one of three books) was written much later and is presented as a combination of fact and fiction with some events based on truth and some fictionalized. This is explained in the book itself.

There are two reasons for this. The first is to present true teachings in an interesting manner so people will read and understand them.

The second is to avoid the mark of the Beast. I would suggest you go to the beginning of the archives and read the teachings on the Beast and his mark which is basically this.

He who places an outward authority before his mind in the place of the Holy Spirit (which works within) has the mark. This mark can be something or someone good such as the Bible, a church, a prophet or even John the Beloved.

If I were to teach from the authority of an outward source in such a stance so that source is not questioned and seen as basically infallible then the student acquires the mark of the beast.

Therefore, in my writings I claim no authority except as the Holy Spirit speaks to the reader as he reads, which thing happened to you when you read the first book. You want to deny this now, but if you are honest you will have to admit it.

You are seeking an outward John or prophet to be your authority and this is the mark of the beast which must be transcended through finding the Holy Spirit which resides within your own mind and heart. I hope you will read the beginning archives so you can see the truth behind my words here. Also, you might want to read the other two Immortal books.

The teachings I give on reincarnation are a stumbling block to many Christians in a similar manner that the teachings of Jesus concerning the Sabbath were. Jesus was accused of violating the law and the prophets they screamed.

The scriptures plainly verify reincarnation as my writings testify. You can read my writings on this in the archives.

So why does a believer of scripture such as yourself criticize me for teaching reincarnation when it is proven in the scriptures?

(1) I gave you positive scriptural evidence that we lived before birth.

(2) I gave irrefutable evidence that John the Baptist was Elijah.

(3) God’s will is to HAVE ALL MEN TO BE SAVED, and to come unto the knowledge of the truth.” I Tim 2:4 God’s will is always fulfilled, but this cannot be done without reincarnation.

(4) Obviously reincarnation was a popular belief back then for many thought that Jesus may be Elijah or Jeremiah born again (see Matt 16:13-14)

(5) Some of the early church Fathers wrote of reincarnation, such as Origen.

Reader: You say you proved reincarnation to yourself through handwriting but then say it was regression that made you take it seriously. Which is correct?

JJ: Both are correct. I believed in reincarnation when I was young but then when I started going to church I was taught that this was an evil doctrine contrary to the scriptures. I swallowed this explanation for about 12 years. I then did experiments with past life regression that made me take it seriously. This was followed by studies in handwriting samples that convinced me.

Reader: Here’s what my research into the named book turned up. …”Almost any hypnotic subject capable of going into a deep trance will babble about a previous incarnation if the hypnotist asks him to. He will babble just as freely about his future incarnations….In every case of this sort where there has been adequate checking on the subject’s past, it has been found that the subject was weaving together long forgotten bits of information acquired during his early years” (Gardner 1957).

JJ: Not so. Such a thing would not explain experiences I had such as the one I mentioned in the treatise. There have been numerous cases where information has been retrieved that was not available in the current life. I have had this happen in my own regressions. Sometimes the subject will even speak in a foreign or ancient language of which he has no knowledge of in this life.

Reader: Are you blind? You have twisted your own mind to believe these things, and now you shine your wasting rays of black light onto all others you meet. Your payload of souls you will lead into damnation shall be great, but if so, these were never intended for paradise anyway.

JJ: You insult me whereas I give the light of scripture to you that you claim to accept. Who is using the words of light here? It is I who is using the scriptures to prove my point, not you. Think on that.

Reader: It is obvious by your dialect what kind of man you are, much in the same way you claim to know so much about a person simply through his or her handwriting, so much more can be learned about someone through the actual words they reveal. I have not the time , nor the patience to debate further, but this reproach I decree, that you should delete the archive, and if you must write, begin anew, and this time, stick to the truth, and leave out all the bs.

JJ: Consider this scripture: Satan is “the accuser of the brethren.” Rev 12:10 Who is being the accuser here? Who is accusing without cause? Who is behaving like the Biblical Satan?

Reader: I doubt you’ll make it to this point in this letter, but if you do, I am sure you won’t respond.

JJ: You are obviously wrong about me here just as you are wrong about my teachings. Go back to your original feeling when you read my book “as a little child” without preconceived notions.