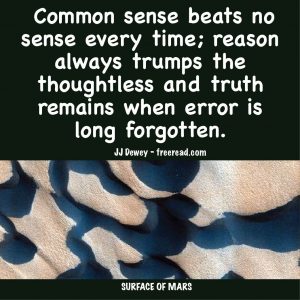 The Question: How about this? Is the mind a great benefit or an obstacle to be removed – or perhaps a little of both? Do we need to release ourselves of our attachments? How do we do this?

The first step in answering this question is to distinguish between the mind and brain.

The brain is a great computer with a tremendous hard drive capable of holding many gigs of data.

While the brain is like a great computer, the mind itself is much more. The mind is likened to the person who uses the computer program to accomplish certain ends. The mind does not have facts and data, but uses facts and data from the brain as needed.

The majority of humanity is already mindless, but not brainless. These people use their computer brains and function according to the line of least resistance or in the direction their various types of programming take them.

Those who tell us to become mindless are therefore preaching to the choir for over half of humanity is already mindless.

When the mind awakens things change. They are no longer limited to the program, but they can use the power of reason and logic to remove limitation.

Once we attain the ability to use logic and reason beyond the ability of our computer brains do we want to discard it and become mindless again?

Consider this. If all who can use mind ceased using mind all progress of humanity would cease and after a generation or two we would revert to violence and lawlessness.

In answer to the question as to whether we want to dispense with or lay aside either brain or mind, the answer of every honest person who wants to remain alive on the physical plane would be no. It’s silly to think of such a thing.

On the other hand, there is an advantage and disadvantage to all things. There is a time and place to use or not use all creations.

We do not want to throw away mind and brain, but we do want to use or not use them wisely.

Here is a quote from my previous writings:

Most people believe that the more knowledge we accumulate and have running around in our head, the more intelligent we will become, but is this true?

Many people who are considered geniuses are noted for being “absent” minded. Einstein emptied his mind of all knowledge to the extent that when he went on walks he would often forget where he was and have difficulty in finding his way home.

Often the greatest inspiration will come when the mind is a complete blank.

Therefore, is it possible that the guy who memorizes a whole encyclopedia may actually have a disadvantage over another who has just made a general study of it?

If I were to tell you that God does not know anything, would that mean anything to you or just sound like nonsense? (End quote)

A principle is revealed here. That is, we can often receive our greatest inspiration, not by eliminating the mind, but by setting it aside temporarily while in contemplation. It is then that a mental vacuum is produced which draws forth inspiration and wisdom that is later used in connection with mind and brain.

It is a mistake to believe the mind has to be permanently set aside, for while existing on the physical plane, mind and brain are essential to civilized living. However, the disciple does need to learn to not clutter up his brain too much and to be able to use his power of attention to place it on the brain and mind or to temporarily take it off to receive higher principles.

What about this we hear concerning the attachments of the mind?

So is there any problem we can trace to the mind that hinders liberation?

Yes. It is illusion. Illusion is created by a wrong foundation belief that is used with logic and reason to come to conclusions which will be erroneous. We must thus discover these wrong beliefs and replace them with truth instead of error.

Many say that the way to God/home/pure Spirit is to follow your heart or to go through the heart.

Is this all there is to it? Does the mind play or not play a role? How about the four planes of formless worlds higher than heart or mind?

Let us move on to examining the third point of the Nothingness Philosophy.

“Ironically, even though we are supposed to let go of everything to do with the mind we are not supposed to let go also of the feelings of the heart – even though the feelings of the heart are a part of duality. I’ve never seen them give any reasoning behind this. They say we are to follow our hearts which will lead us to the Nothingness Point. Some use the word “‘surrender.’“

Question: We often hear that the mind is dualistic, but how about the heart and the feelings associated with it?

Is dualism necessary for these to even exist?

Most of the group seemed to realize that if the mind is dualistic the heart would be also. The fact that the heart center is dualistic is even borne out by the name of its attributes which is Love-Wisdom. Half of the twelve petals are associated with love energy and half with wisdom. What few realize is that it takes a combination of dualistic love and wisdom to attain a full realization of spiritual love.

As further evidence of even more dualism in the heart is, there are two heart centers. The one we all know about is near the physical heart between the shoulder blades. The second is the heart center in the head. This gives additional credibility to the scripture which tells us that “as a man thinketh within the heart…”

If thought is dualistic then thinking in the heart would also be dualistic making the heart dualistic.

In addition to this the heart is on Ray Two. Two is the number of dualism.

Logic also bears out the dualism of the heart. Now I know some do not want us to use logic and want us to go straight to some non dual energy, but I see this as the lazy man’s way to enlightenment for without logic you can be convinced that the green cheese on the moon is the Key to the Path of return.

Love is a feeling. For a feeling to be real there must be the one doing the feeling and a thing that is felt. Again we have a duality.

Love and feeling cannot exist unless a duality exists.

The last part of the question reads: How is the principle of surrender supposed to work. To what are we supposed to surrender?

Some think we are supposed to surrender to anything that appears supernatural and others think we should not surrender to everything. The truth is in the middle.

One thing we should surrender to is the spiritual guidance that comes to us through the soul. In fact this is necessary if a disciple is to achieve consistent soul contact. If he does achieve contact and disregards the message then his sensitivity decreases. If he surrenders to the message then the link with the soul will increase. Each communication that is effectively heard and responded to increases soul infusion.

The question may arise, what if I get something from my soul that goes contrary to my thinking? Should I not think it through first and make sure it makes sense?

Actually, a good portion of the guidance I get from my soul does not make sense to my concrete mind and goes against that which I would decide using logic and reason.

If the disciple only gets guidance that goes along with his thinking then he is probably getting guidance from his emotional self rather than his soul.

Does this mean that we are to toss the mind and logic out the window when soul contact is achieved?

No. The soul expects us to do all we can on our own and only assists us when we have done all we can do first. Often will be the case that we use our minds, our logic and reason and will come to correct conclusions. If we are going the right direction there is little need for the soul to give us that which we already see.

But there will come times that we are following the highest we know, using all the faculties available and are still in error. When this happens, and the disciple is open, the soul will communicate truth or direction to us that may run completely contrary to anything we have before considered.

When this happens should we set thinking aside? No, of course not. The first thing I do when I receive such a communication is to attempt to understand it with my mind, reason and logic.

Often, yes. If you can make sense of a communication from the soul, it makes it much easier to follow or incorporate that which is received. Sometimes I find the communication does make sense and sometimes it does not.

What if it does not make sense? Should we surrender?

Yes. If you are sure it came through the soul and not the astral body.

To answer let me give a correspondence. Suppose you had to go through a difficult maze. You find that through the use of your logic and reason you can make some progress, but it is slow. Then you meet a trusted old friend. He says that he has the maze memorized and can lead you through it. You follow and the friend seems to lead you without error, but then he begins to steer you to a turn that seems wrong to you. It seems like you took it before and it leads to a dead end. You question.

Your friend says, “It may seem wrong, but consider this. I have always led you correctly and never lied to you. I promise you that this is the right turn to take.”

Thus it is with the soul. The soul sees the path ahead and understands the language of principles which reveal truth. That which truly comes through the soul is to be trusted even if it goes against standard reasoning and belief systems.

The first couple times I received direction through the soul I did not fully embrace it because it did not make sense to me. It was not long before I found out I was wrong. Finally, I learned to follow when I receive and so far all that I have received has been proven out in my life to be 100% correct.

So what if the soul tells you to do something that is harmful?

Answer: It will not. It only leads you on the path of progress and harmlessness. However, I will add this caveat. Several things I received seemed like they could end up being harmful to me personally, but thank God I followed, for just the opposite occurred. Everything turned out to be a powerful benefit that is now invaluable.

“He who has injured thee was either stronger or weaker than thee. If weaker, spare him; if stronger, spare thyself.” William Shakespeare (1564 – 1616)