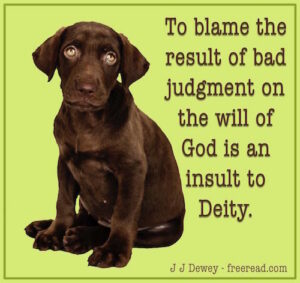 What you are describing as the will of god, is just part of what God already exists as.

One thing that is predictable is where you are going with this. We know you have the belief that everything is happening now and all is as it should be, that we live in a perfect universe and even a woman being raped should appreciate God’s will being carried out on her.

The fact that you see a rape or murder as part of God’s perfect will should make you aware that something is wrong with your belief system. Unfortunately, it does not faze you. You think that it was God that decided the woman needed to be raped. If you look around at all he has decided (in your opinion) such as Saddam Hussein running people through a meat grinder then God must be as pretty mean guy. Maybe going to heaven would be a scary thing if you were correct.

Comment: You seem to imply it is somehow possible to not do gods will.

Yes, I do imply it. So did Jesus. His Lord’s Prayer tells us that God’s will is not yet done on earth as it is in heaven.

Question: How would it be possible to do something contrary to God’s will

Real easy. Just pick something contrary to God’s will and choose to do it. Killing your neighbor’s dog should do the trick.

We must take note that nothing resists the will of God in the higher formless worlds, but in this world of illusion a different reality is at play. Some teach that because this world is created by illusion, and that it is not even real in the eternal sense, that the true will of God is not even manifest here.

Our friend is saying that he sees that there would be no existence without form and motion within that form. He sees that from God’s point of view everything is happening at once, that there is no past or future even in the worlds of form.

When the Eternal Now is reached that state of being does not identify with form. There is no motion, time or space in this awareness.

He doesn’t think we can read tomorrow’s newspaper but thinks it is already printed. My contention is that if he is right someone should be able to read it.

Within this Eternal Now is no form, but the primordial undifferentiated substance from which all things spring.

Question: Is the real argument over predestination just semantics?

I don’t think so. Often the problem is semantics. Members will sometimes disagree with me just because of a different use of words and when we straighten out the communication, we wind up agreeing. The reader and I have a true disagreement. He thinks everything down to the tiniest detail has already been decided and brought into existence and is happening now. It appears to him that we are only in a small section of time and space because of the limitations of our consciousness.

I see the future as malleable yet the end of our evolution is pretty much set – like the end product of a blueprint is a house. In the building process though, many unexpected events occur.

I think our friend has done a good job in arguing his point, a point that can never be proven or disproved with the concrete mind. I’m sure he must have generated a few new brain cells in the process.

Now if we examine the dialog representing the reader’s view many would think he is in la la land if one thinks a judge would listen to anyone accused of rape who insist that the woman was raped for her own good. We need to use a realistic dialog that could occur in the real world if we want to convince anyone.

Consider a person who decides to design and build his own home. He works many hours and makes many corrections in the design. He’s just about done and spills coffee right in the middle of it and has to recreate it. His corrected mistakes, which were not a part of his design, did not deter him from finishing it. When the design was complete he did not see the mistakes as being anything that made the design perfect. Instead, he saw them as problems that caused delay, but not discouragement.

Next he decides to physically build the house. As he starts, a neighbor comes to him and tells him the house is already built. The builder gets such a good laugh out of this that he loses an hour of work that day because his mind is distracted. As he works away the next day, he hits his hand with a hammer and walks back and forth letting out a few choice words. The neighbor approaches him again and tells him to be of good cheer. His house is already built and hitting his thumb was part of the plan. It is good, as well as necessary, this happened.

“I drew up the plans myself and believe me it was not part of any plan,” said the builder. “What are you trying to do, irritate me?”

The next day a thief came on his property and stole some of his tools. Again, the builder was upset and this was noticed by the neighbor who approached him and said, “Friend, this theft is a part of a great plan designed for your good. Your house could not be perfect unless you went through this experience.”

The builder felt like slapping some sense in the neighbor but constrained himself. “I’ll tell you what this theft did,” he replied. “It has cost me time and money and delayed the building of my house. This thief has done nothing to add to the perfection of anything as far as I am concerned.”

“Wait and see,” said the neighbor.

Everything went pretty smoothly until it was time to paint. The builder hired a man to paint the house while he went fishing for a few days. When he returned he was aghast to discover that the man had painted the house the wrong color. As he was walking back and forth saying more choice words, the neighbor approached him again.

“So the painter got the wrong color? It would help if you understood that this bright pink is just part of a greater plan on the road to your perfect house and perfect enjoyment thereof.”

Again, the man constrained himself.

The painter skipped town and the builder couldn’t afford to hire another so he finished the job himself. It took him a week to scrape off the pink paint and change the color.

Finally, he was done. The house looked just like he had planned. He stood back and admired his work. As he was doing this the neighbor approached him again and said:

“What in the hell are you talking about?”

“Your house is now perfect,” said the neighbor. “All those things you thought were mistakes were just part of a plan to create a perfect house for yourself.”

The builder was incredulous at the man’s audacity. “Those mistakes did nothing to add to any perfection. The perfection was achieved in spite of them. All they did was cost me time and money. If they didn’t happen I could have moved in some time ago and would have money left over for landscaping. I’ll still get the landscaping done. I’ll just have to save up some more money.”

“You just don’t understand the great plan behind all things,” said the neighbor. “If you did you would see I am correct. You needed to see your house as bright pink before you could really enjoy it now.”

The builder was astonished at the smugness of the neighbor and decided to give him some of his own medicine. He bought a dog that barked like crazy throughout the night. During the second night of barking the neighbor knocked on the door and said. “That dog is driving me crazy. Please shut him up.”

The builder replied, “I have been thinking about your philosophy and have concluded that this barking dog is perfect for both of us. His barking is music to my ears and it is also part of the perfect plan that he drives you crazy so you get no sleep. You need to be driven crazy.”

The neighbor cursed the builder but his cursing was music to the builder’s ears. He encouraged his dog to bark all the more, especially at night. Maybe the neighbor would finally get it into his head that some events are not a part of a master plan, but just temporary distractions we pass through on the way to reaching our goals.

Jesus said: “The Son of man goeth as it is written of him: but woe unto that man by whom the Son of man is betrayed! it had been good for that man if he had not been born.” Matthew 26:24

Obviously, we are better off avoiding really bad mistakes if some are so bad it would be better if we had not been born in order to avoid them.