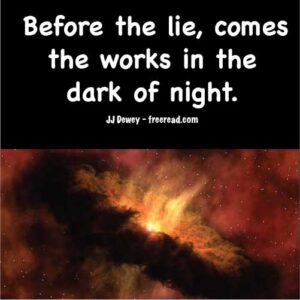 Question: Is it possible that Jesus betrayed Judas in a past life and reaped his own karma?

Because Jesus was much further along the path than Judas it is unlikely that Jesus has betrayed him in the past. It is quite possible that Jesus had betrayed one of his teachers in the far past when he was a regular disciple and the betrayal of Judas was a fulfillment of his own karma.

Question: Could Judas have been directed by his soul to end his life?

Anything is possible, but as a general rule the soul urges all those in reasonable health to continue with their lives until a natural end comes. This is essential to fulfill the entity’s purpose in life. My soul has never led me toward escaping responsibility.

Question: Would a planned betrayed have been that dishonest?

It would have been deceptive. Several times it is written that Jesus stated point blank that one of the disciples would betray him. Then at the Last Supper he even identified the betrayer as Judas. It would have been a definite contrived deception to have stated several times that a disciple would betray him when he knew that there would be no betrayal, but Judas was only doing as directed and faithful to his Lord.

If it is true then Jesus knew that Judas was appointed by him to pretend to betray him then this would have been a definite contrived deception, something a Master avoids at all costs.

It is very believable that one disciple out of twelve would betray his master. Almost every great teacher has a disciple who betrays him.

Question: Was the betrayal based on some natural law?

Betrayals are an effect of laws rather than a law or principle by itself. Just as it is written that one third of the hosts of heaven betrayed God and followed Satan it is a general probability that one third of the disciples of an enlightened teacher will betray him to some degree – if given the opportunity.

Despite his weaknesses Judas was the one most qualified to be the twelfth apostle and Jesus had to plow with the horses he had. As time progressed, he could see into his heart and discern his intent, but from the beginning he expected to be betrayed, especially because of the prophecies of betrayal in the Old Testament.

It is not deceptive to not tell all you know. I am not telling you the color or my shirt I am wearing. Am I being deceptive? No. It becomes deceptive when you ask the color of my shirt and I give you the wrong answer.

Question: What if Judas was overshadowed and someone higher gave him the go ahead to do what had to be done, without Jesus’ knowledge?

This is probably what was going through the mind of Judas. One belief is that he thought that had to force Jesus to display his powers by putting him in a life and death situation. He thought the Master would save himself and convince the world he was the Messiah. When he saw the plan did not work he realized he was deceived by a dark brother rather than a master.

Question: Why didn’t Jesus bypass Judas and just give himself up to authorities.

Because suicide is against the code of the Brotherhood of Light. A brother may give his life through the natural unfolding of events if it furthers higher purpose, but he will not self-destruct. To face the cross with no karma so death could have been overcome he needed the unfolding of natural events to lead him there. If he had plotted with Judas or given himself up then this would have been a suicidal and deceptive plan.

Question: Is any spiritual group secure when there is always a possibility of betrayal?

Judas pulled himself out of the group through his act of betrayal. Molecules made of humans have been very fragile in the past, but as they are finally established concretely and in larger numbers they will be much more stable. Democracy, for example, was extremely fragile when first practiced by the ancient Greeks, but is now much more stable, thousands of years later. Even so we still have a long ways to go.

Judas thought he could see from a higher angle than his Master – a common mistake made by disciples. He thought that Jesus was not doing what he came here to do and he would help him out. Because of ego a dark intelligence deceived him and convinced him he was in the light.

Question: If all the group had soul contact then how could Judas have betrayed his master?

Yes, they all had soul contact, even Judas. What made his betrayal so egregious is that he went against his own soul. When he did this, he lost his contact and became extremely depressed. This is one of the reasons he committed suicide.

The only thing the apostles knew was what they were taught by Jesus or that which they sought to know through the Oneness Principle. If they did not seek, they did not know.

Question: Will Judas reincarnate and pay off his karma?

Yes and if Judas comes back and does great acts of service this will be a great aid in paying off his karma. When he becomes a spiritual teacher he will probably have a trusted disciple betray him and then fully understand what he did to his master.

Question: Isn’t DK and other spiritual teachers being deceptive in presenting teachings that are obscure  and misinterpreted?

This is deception caused by our own selves, not the teacher. A conscious deception is one where the person purposefully gives false information to cause a wrong conclusion to be reached. An Algebra textbook is not deceptive because we do not understand it. We deceive ourselves about interpreting equations because we have not sufficiently applied ourselves.

I also didn’t understand much of DK when I first started reading him and still have much to learn, but I have always considered him an honest teacher.

Question: If Jesus could see into the future then why didn’t he take Judas aside and  set him straight?

Actually, I believe he did take Judas aside and talk to him about such things, but Judas defended himself and his ideas of what Jesus needed to do to bring the Kingdom of God.

A betrayal never helps a mission and Jesus could have accomplished more had Judas been faithful to the soul contact.

If Judas did not betray Jesus something or someone else would have probably yielded him to the authorities. In the off chance this did not happen his mission may have taken a different course. It was not so set in stone as many believe.

Judas believed he had a plan superior to his master and would have forced the hand of Jesus later if he was prevented at that time.

Question: Do you think that Judas had a good intention of forcing Jesus to demonstrate that he was the Messiah?

This is a popular view of scholars and I believe it has some truth in it. It is interesting that even the worst villains in history think with their ego that they are doing the right thing. It is only by maintaining consistent soul contact that we can see the correct step to take.