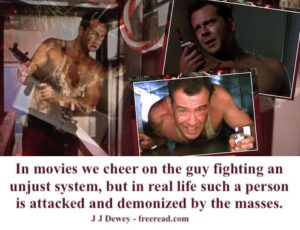 The Day of the Beast

I’m sure terrorists have considered making an attack today. Perhaps the main thing discouraging them would be that the governments of the world are probably on high alert just in case.

A remake of the Omen is to be released today, as well as Ann Coulter’s new book, The Church of Liberalism. Some on the left see Ann as worse than the antichrist. I met her once and gave her my book. I’ve always wondered if she read it.

I also met John Stossel a while back and gave him a copy.

As most of you know I have taught a much different meaning behind the Beast than those who have preceded me.

Most see the Beast as a Hitler type of dictator or a tyrannical power of some sort. They see the mark of 666 as a literal mark. Most believers think the mark will be a computer chip that will be implanted in the forehead or the right hand.

On the other hand, this does not harmonize with the scriptures, for they tell us that the antichrist was in the world, even in the days of Jesus.

The Beast is not one man or nation and the mark is not an imprint though the power of the Beast could force a visible mark or implant.

One difficulty of a literal mark today is that the 666 is so widely known that the populace would resist any mark on their right hand. Maybe this was why Hitler put his numbers on his victims left arm rather than the right.

I have taught that the Beast represents unearned and unjust authority. There is a correct authority and that is one who has proven himself to be capable, but in our world system today, as well as in times past, many who have not proved themselves and are not elected obtain positions of power and then expect to be mindlessly obeyed. This beast-like authority then herds those who relinquish mind and believe and follow without question the directions given.

Since teaching here, I have done my best to not use any undue authority to force your minds and hearts to accept what I say. I have always said that everything I teach could be wrong. It is up to your souls to decide, but when your soul does give you confirmation you will have received from an earned authority which puts you under an obligation to accept, or that soul force could withdraw.

May we all have reasonable doubt of those outer authorities yet be sensitive enough to soul to obtain a sure witness of true principles.

A reader says he can find no Beast, other than ignorance!

Here are several ways to quickly locate the Beast.

[2] When a traffic cop stops you tell him to quit spying on you and to get a real job.

[3] Attend a cult meeting and publicly declare that the leader is about as spiritual as Elmer Fudd.

[4] Run an ad in the paper using every type of politically incorrect speech that you can think of.

[5] Hold a press conference announcing that you have discovered a form a free energy that will make utility companies obsolete.

[6] Publish a book proving anything in the DaVinci Code is true.

[8] Publish an unflattering cartoon of Mohammed.

Do any of these things and you will not have to look far to find the Beast, which is unjust or unearned authority.

Ignorance, and also fear, gives power to the Beast by the unthinking masses, but those who are not ignorant and enlightened will be the ones to suffer from it. I started a list of three and wound up with nine but just thought of a tenth:

Publish a paper proving there was no Big Bang.

Scientists now accept this like a religious authoritarian principle and anything to the contrary would be attacked by most of them without considering the new ideas.

If you want to see the Beast at work in Science read the history of how Velikoski was attacked for his ideas in Worlds in Collision.

Re: Focusing on Reality

A supporting reader indicates that some may be in error thinking they have greater soul contact than myself.

We want to avoid establishing me as a person with such solid spiritual contact that I cannot be challenged.

I may be in the soul all the time or I may not.

My words may be true or they may not.

Only by encouraging seekers to think for themselves can they achieve truth growth away from the power of the Beast.

Those who challenge me may or may not be correct, but at least they are thinking and exploring. As long as they continue to do this and accept the highest they can perceive they will unfold layer after layer of truth.