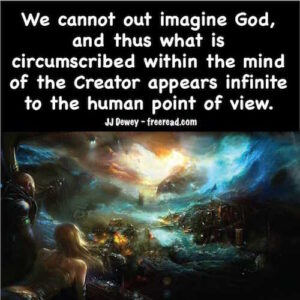 Some are questioning my teachings on infinity so I will add a few thoughts.

There is a beginning to everything where form, time and space is concerned.

There is a beginning and end to time, space and form. We must go beyond time and space to find the eternal and beyond this the idea of infinity does not even enter in because there is no time and space. The theoretical idea of the infinite only has meaning in time and space.

There is a beginning and end to all things occupying time, form and space. The Infinite does not exist there and it has no meaning in the higher spheres where the “eternal now” has meaning. There is no infinite past or future for they do not exist there.

The main problem we have had in understanding it is that some are defining it differently from myself.

In talking about it I have differentiated between that which is unlimited, endless and infinite. Many people tend to lump these all together as representing the same thing. They are not quite the same thing.

[1] Unlimited: That which is unlimited may have an end but he who is in an unlimited situation has no boundary set upon his field of activity. For instance, a person who works for wages is limited in his income to X amount per hour. The person who works for himself is often referred to as unlimited in the amount he can make. He can always work a little harder or a little smarter and increase his income. If he made X amount last month there is nothing limiting him to X this month. We would never say the self-employed person will make an infinite income. Similarly, I have referred to the universe as unlimited. Science has proven that it is expanding and we know of no limits of how far such expansion will go. In other words, it appears unlimited.

[2] Endless or eternal: This means the item under question will never have and end or reach the end. The end can never be reached by us so it is endless to us. Endless does not include an infinite end point.

[3] Infinity or infinite: I am using this term as it is used in mathematics. Whereas endless does not include the end point, infinity does. The infinite includes the beginning, middle and end. In math there is no such thing as infinity plus one because infinity always includes the plus one. Infinity includes the endless end.

This is why I say infinity does not really exist because an endless end does not exist. If no being or consciousness can find the end then it does not exist and therefore there is no such thing as an infinite point.

Infinity is useful as a theoretical endless point but useless in practical application because it does not exist.

I suppose a number of mathematicians are playing around with different ideas and definitions, but when I took math in High School and college there was only one consistent definition in all the classes I took with several different teachers. Basically, it is the one I have put forth which agrees with this online mathematical dictionary which gives it as: “A reference to a quantity larger than any specific integer.”

In other words, infinity is larger than any number that can be written.

Since any number can be reduced to writing then infinity does not exist – only as a theoretical idea.

Wikipedia gives a similar definition: “Infinity is the state of being greater than any finite (real) number however large.”

They also gave a reference to a train of thought that thinks as I do that infinity does not exist. It is called constructivism.

Here are some interesting comments from another math page:

“No ‘infinity’ concept exists in the context of any number system, if by number system one means a collection of concepts that have operations like addition and multiplication the way familiar numbers do, operations which obey the usual properties of arithmetic.

“From this one can immediately see that the rules of arithmetic must be violated, since if they held one could subtract infinity from both sides to conclude that -1 = 0, which isn’t true.

“Therefore, there is no number system which possesses the usual rules of arithmetic and in which infinity exists. In other words,

“Infinity does not exist, if by “exist” one means in the context of a number system.”

Quote taken from THIS LINK