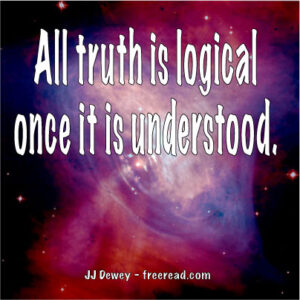 “Jesus answered them, and said, My doctrine is not mine, but his that sent me. If any man will do his will, he shall know of the doctrine, whether it be of God, or whether I speak of myself.” John 7:16-17

What principle was the Master teaching here and how can we use it in the discovery or confirmation or truth?

Perhaps some additional questions will get us going here.

Where do we look to find the will of God?

How is following our perception of the will of God a test that proves the perception true or false?

We are also told that “By their fruits you shall know them.” What does this mean and how is it a guide to the discovery of truth? What are the different fruits?

A student writes: “I love this concept of discovering truth without the aid of soul contact. Now, I know for a fact that I do not possess soul contact. I am extremely envious of everybody in this group who is in possession of this rare pearl of wisdom.”

Don’t write yourself off so easily. Soul contact reaches down through several reflections. Most of us have received some type of impression either directly from the soul or reflected through our mental or astral (emotional) bodies. Have you ever had a gut feeling to do or not to do a thing? Have you ever had an idea flash into your mind that just seemed right to you? Paying attention to these subtle impressions are guides that leads you to the still small voice, so still and so small (a zero point) that you will wonder if it is your imagination working overtime.

But then if you have faith in this voice and follow it, eventually the voice will seem as strong as a rushing of mighty waters and you will come into the oneness principle and know that you are never alone for you always have before you an association with others of higher consciousness who are one with the Voice.

Question: How about using soul contact to figure out whether the “Shroud of Turin” is the genuine article or not?

“A principle can reveal thousands of facts, but it takes thousands of facts to understand one principle.” Unless a person is an adept at reading the Akashic records correctly (many read them incorrectly) even one with soul contact must use the same process of discovering the truth about the shroud as the average guy. Even if one has contact with the Brotherhood, he will not have the information handed over to him unless he first does all he can on his own to discover the truth, and even then, the revelation must fulfill some purpose, not just idol curiosity.

A lot of research has been done on the shroud and various conclusions have been reached. If one with strong soul contact were to study all the data it is possible that he could follow some guiding principles until he receives an inner confirmation of the truth.

To be honest, I have not investigated it in depth for it is not a high priority on my list at present.

A reader wants to know what the principles of discovery could reveal about the star system of Sirius which is the center of much speculation lately because of its alignment with the pyramids.

Let us take the information we have from science and see what we can discern about Sirius through the application of the Principle of the Law of Correspondences.

Sirius is about 8.7 light years away and is a double star, or possible triple star. The main star (Sirius A) has twice the mass of our sun but is 30 times as bright. A planet there with physical life like us would have to be about as far away from Sirius as Jupiter is from our Sun or they would be scorched to death.

The double star (Sirius B) is a dying Sun (white dwarf) of about average mass that has 10,000 times less light than the main Sun.

The two suns circle around each other over a 50 year period.

From the writings of the Brotherhood, we know that they have a strong presence on this system; therefore, we can assume that there would be planets there. We are also told that the life there has evolved much differently than here and the kingdoms as we know them (vegetable, animal, human) do not exist there but life exists in some other form, according to DK. Not much more is given.

Now let us take what we have learned from what is readily available and see how far we can go. The two suns are quite a distance from each other, further away than Uranus is from earth. Sirius B is a little smaller than earth, but gives off its own light, but much less than a regular sun. If one were to dwell on a planet situated between the two suns the main star would be about as bright as our sun, but the second star would just be a very bright point of light, bright enough to give a dim light to the planet at night. Very little heat would reach it.

If we were to use the model of our solar system, we may guess that the large mass of these two suns would suggest 24 or more planetary bodies. But something overlooked by many new agers is that Sirius is a young system compared to ours. Sirius is estimated to be 230 million years old, born in the days of our dinosaurs; whereas our sun is 4.6 billion years of age or a whopping 20 times the age of Sirius. The total lifespan of Sirius is projected to be about a billion years; therefore, it is not likely to have the time to evolve earthlike planets with kingdoms such as ours, though most likely some planets will be there. Most likely there may be gaseous planets like Jupiter and Saturn.

The first step in discovering truth beyond our senses is to first absorb what we currently know. If one were to take in all we know about Sirius and contemplate until a point of tension is reached one could receive more valid information through the soul. All I have provided here are seed thoughts.

This leads us to a seventh principle of discovery:

Gather all the reliable information you can about a subject of interest and try and see the principles suggested by the data. Then draw conclusions and run the conclusions by your soul and see if you receive a response.

Some things have to be believed to be seen. Ralph Hodgson, on ESPN