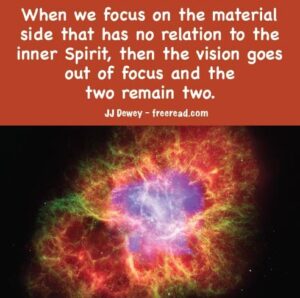 More than Meets the Eye

A reader makes a solid point:

“We already have an all-seeing eye. Our third eye is all seeing. We just have not developed it to its fullest potential. We do not concentrate on it because we have two eyes to help us perceive the illusion of our physical world and therefore rely on them more and have no real motivation to develop our third eye. I feel that our eyes are a detriment to the development of our third eye & spirituality. That is why we close our eyes when we meditate. It is a scientific fact that we have optical nerves going to the third eye. The more we develop and concentrate on the third eye the less we will need or use our two eyes and therefore the smaller they will become and then disappear. Just like we don’t need our appendices or tonsils anymore. We have outgrown them and they are getting smaller.”

Another reader gives us some solid evidence of the power of the third eye:

“I have meditated in the past and just before I opened my eyes, I was able to perceive the room around me. I ‘seen’ a picture of my surroundings, down to the smallest detail, even ‘saw’ my husband moving around in the bed next to me. I was not using my ‘real’ eyes to ‘see’, but in fact was tapping into my third eye’s vision. With this sight, I was able to see in a depth I had not experienced before, like seeing a fourth dimension or something. There was more color than I had ever seen before, and a type of mist or glow around everything (I think I was seeing auras). Even my headboard (which is oak) was glowing! The more conscienceless an object or being had, the stronger the ‘glow’ was. It freaked me out at first, so I opened my eyes, and immediately the images faded back to ‘normal’. I closed my eyes to see if I was imagining this, and after a few minutes of calmness, the vision returned. I was even able to perceive through the walls somehow, ‘seeing’ the bed in the room next to mine!!”

JJ: Many have reported seeing with greater power of vision than is explainable based on standard scientific understanding.

It is always a mistake to constrict ourselves to a statement such as: “This is impossible because it runs counter to scientific laws.”

Actually, nothing runs contrary to law. The problem is that we never have a full understanding of all the laws.

Let me give two examples

Time and time again scientists themselves have come face to face with a reality that forced them to reconstruct their own view of law.

One was the Michelson-Morley experiment. They thought the following was an established scientific fact.

Two trains go opposite directions beginning at starting point (A). Both trains move away from (A) at 50 miles an hour. Two boys on each of the trains throw a rock in the same direction the trains are moving. The two rocks move forward at an additional 50 miles per hour.

Here are the conclusions that were thought to be irrefutable.

(2) When the boy on the train at 50 MPH throws a rock at an additional speed of 50 MPH then the rock is simply traveling at 100 MPH in relation to point (A).

(4) If one of the boys throws a rock at 50 MPH behind the train it would be reduced to zero velocity in relation to point (A).

Here we have what appears to be basic math that may have never been questioned if the Michelson and Morley hadn’t seen the results of their experiment with their own eyes. In fact, they were so bewildered with the results that they spent most of the rest of their lives testing, refining and retesting it.

Using the above logic back in the late 1800’s, they figured that if they shined a light beam away from the earth in two different directions that they could record two different speeds for light.

Then if they project a light the other direction it should move much slower like a rock thrown behind the train.

To their amazement nothing about light followed the laws they thought were rock solid.

In every direction and situation light continued at the same speed. To understand why this was so baffling we need to apply the results to the example of the trains.

The results they saw with their own eyes was something like finding out:

Wrong: The two trains are only moving away from each other at 50 MPH

(2) When the boy on the train at 50 MPH throws a rock at an additional speed of 50 MPH then the rock is simply traveling at 100 MPH in relation to point (A).

Wrong: The rock is only moving away from point (A) at 50 MPH

Wrong: The two rocks are only moving at 50 MPH away from each other.

(4) If one of the boys throws a rock at 50 MPH behind the train it would be reduced to zero velocity in relation to point (A).

Wrong: The rock continues at 50 MPH in relation to point (A).

NOTE: (50 MPH corresponds to the speed of light for this analogy)

This roughly gives you an idea of how befuddled Michelson and Morley were and why they repeated the experiment with more refined instruments over and over.

It wasn’t until Einstein came along with the theory of relativity that some answers seemed to surface and even then we are not sure of all the answers.

Another item that baffled scientists was the double-slit experiment. This has had many variations but in one of them they send a single electron toward two openings on a sheet and the result is that the one electron appears to go through both openings and land in two places. This phenomena happens with beams of light and other particles.

With both of the above experiments (and many others) if scientists had not seen the results with their own eyes they would have never believed them possible and would never have predicted them.

There is much more evidence of the possibility of an all-seeing eye than there was to foreshadow the relativity of light or the double-slit.

If one were to meet a Kumara and peer into his all-seeing eye the question would not be “Is this possible?” but one of seeking to understand that which has manifested in reality which runs contrary to preconceived notions.

On another note a reader was commenting on the teaching that the Ancient of Days came here from Venus to serve us. On reflecting on this she said:

“Again I start crying and feel somewhat bereft……..I don’t get it!!!! Am I touching some astral thoughtform????”

It sounds like you are picking up some true feelings associated with your distant past. This could be related to a number of things. Most likely it would be associated with a true teaching you once learned (or taught) around the sacrifice of God or the masters toward humanity. Perhaps you came to this earth also from another sphere with the purpose to serve and your soul is reminding you of this.

It is good that you are feeling this and it will be helpful for you to reflect upon and ever notice when the feeling returns and what causes it to return.

Consciousness of our powers augments them. Vauvenargues