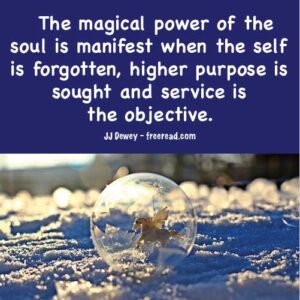 Audience: What we’re really looking for is like the middle way. We don’t want to become Mother Theresa and give up everything and all our creature comforts.

JJ: You can look at me for example of what I think it is. I live my life according to what I think is mastering maya. I still drink some wine and enjoy good food, but I do not let it master me. This is what we need to do. You master it like you ride the wave meaning you don’t negate the wave but you use the energy of the wave to your advantage. You ride the wave of physical matter so that you master the energy of matter so it is used for the best possible use.

Audience: Is that like having things without attachment to them?

It tells you that you need the correct recognition, the correct praise. You need to be seen by everybody as a very outstanding person. These are the sort of things the ego tells us. On the path through this emotional world, and as we evolve through it, we pick up a lot of glamours. For instance, a Messiah complex is a glamour. There are a lot of teachers out there with a Messiah complex. Hopefully I’m not one. (laughter) They think it’s their duty to save the world from itself. A lot of glamours are behind good intentions.

There may be a glamour behind being a mother. The mother may think that her job is so important that she ignores her husband and gives all of her attention to her kids. “I’m a good mother,” she thinks; therefore her feelings of importance and her attachment to herself is as a wonderful mother. She may ignore her friends, her spouse and her own development because of her kids. This is the result of a glamour.

Most glamours are behind something that seems good because that which is evil is usually just good which is misused, a good intention with some flaw in it. Even Hitler thought he was doing a good thing. He thought he knew what was right and he was going to make sure everyone else knew it too. Even that which is evil has some type of good intention that’s warped, misunderstood or has a flaw in it.

This distortion of good is behind glamours. A glamour is usually some type of good intention but it winds up astray. The reason we keep the glamour is because it feeds the ego. With the mother, she really wants to be a good mother and she realizes this but it feeds her ego to think, “I am really a great mother.” She’s feeding her ego with something of good intention.

Audience: The road is paved with good intentions, right?

JJ: That’s a good point. What the ego tries to do and how the ego produces glamour is that it directs everything to the lower self so we get attention. Going back to the good mother, she goes out of her way to make sure everyone knows she’s a good mother. It feeds her ego. On the other hand, the true good mother without glamour will be a good mother even if no one knows it. She may be doing great things for her kids, but she doesn’t care if anyone knows or not. She’s concerned about her children and that everyone is taken care of. What else can be a glamour?

Audience: This very group could be a glamour for some of us.

JJ: That’s a really good point. We could think, ‘We’re a special group and since I’m a member of this group I’m more enlightened than these other groups.’ If we have this attitude this is a glamour. It produces a very judgmental attitude.

Audience: Didn’t you say you could detect a glamour because a person becomes emotionally attached to that glamour and they get defensive.

JJ: If they’re really defensive about something it isn’t an ironclad thing but it’s an indication that it can be a glamour. For instance, Andy dresses really good but there are some people who dress really nice purely because of glamour and they really dress flashy. (laughter and various comments on how people are dressed.) I put this shirt (a bright shirt) on because my wife gave it to me.

Audience: If there are false glamours I think I suffer from those, like I’m not good enough. It’s probably a way for me to draw attention to myself.

JJ: There are a lot of glamours. There is even a glamour around humility. Do you ever meet people who say, “I’m not good enough to do that”? They do it in such a way that it’s to draw attention to them so you tell them they are good enough.

There’s the martyr syndrome, the martyr glamour, the false humility glamour but these people don’t really feel humble. They’ll say they’re humble or no good or whatever but that’s not the way they really feel. They really feel superior but they’re seeking a pat on the back. It’s a way to get other people to tell them that they are superior and that’s what they really believe about themselves. So, you can even have a glamour about humility and things that appear opposite of the ego. If you say, “Oh I could never be as good as you” but you really don’t believe that you’re just saying it so other people pat you on the back, that could be a glamour.