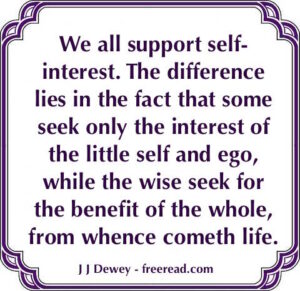 We must transcend all these glamours. The key to transcend them is to overcome the ego. We need to be willing to let the ego go. “He that is willing to lose his life for my sake, shall save it,” said the master. To let the ego go, you have to actually lose your life. It feels like losing your life because the ego has a life of its own. When you let it go it begins to fight for its own existence. If someone were strangling you wouldn’t you fight to live? When you strangle the ego it’s going to fight and kick and do everything it can to make you feel important because to make you feel important feeds it so it has a reason to live. “If you don’t strangle me I’ve got some stuff that will really make you shine,” says the  ego.

Audience: I think that for both of these principles there is an opposite for everything. For example, with ego, ego says, “I’m so great” but the opposite can also be damning and that’s “I’m not good enough.” So those two extremes have to meet the middle way where you know who you are, you’re not puffed up about it and you’re not diminishing yourself when you should be living up to something you can do. That law of opposition comes into the maya. One extreme is giving into your appetites. The opposite would be not allowing yourself to experience certain things in life. There may be certain enjoyments in life that you don’t partake of because you think you’re going to indulge too much. Take the Amish for example. If we don’t want to sin let’s live this boring mundane life. Well, yea that works but they’re erring on the other side because they aren’t experiencing things that could help them progress. There is an opposite for each one of these.

JJ: I agree 100%. To master maya you don’t just deny yourself something but you have to know how much you can take in of something. You can drink a little wine and still be a master of maya. You can have wild sex with your wife and still be the master of it. (laughter) If you’re going to ride the wave, you don’t master it by being afraid of the wave. You ride the wave by tackling the wave and mastering the energy of the wave. You must find out how to use the energy of the maya so that you are the master of it.

It’s the same with glamours. We must unravel the glamours by letting our ego go. When we let our ego go, the glamours automatically dissolve. You don’t have to tackle them so much one by one. When you let go of the ego and put attention beyond the ego then the glamours just unravel.

JJ: Right. The Buddha experienced both of those extremes. He had extreme wealth and extreme poverty then he saw the middle way.

Overcoming these emotionally based glamours is the most time-consuming thing to master on our path. It’s in between the first and second initiation. It takes many lifetimes to be able to master our glamour and our egos. When a person begins seeking, it takes a long struggle to master all these glamours. It’s really tough to let the ego go. It’s kicking and screaming and often we let it come back to life for another lifetime or two. Eventually we get rid of it so we master our glamours so our attention is on something higher than our lower selves. Once this happens we have to undergo the next hurdle. Does anybody know what that is?

JJ: What’s in connection with the mind that has to be mastered? Illusion. What is an illusion? What’s the difference between an illusion and a glamour?

JJ: A person can overcome his glamours and overcome his ego completely and still be subject to illusion. He can be in illusion and have pure intentions, really want to do good and be a servant of God. An illusion is a wrong piece of information in your foundation belief. You need to go back and ask yourself, “What do I believe and why do I believe it?” Then you go back and find out what caused the beginning of your belief.

JJ: Yea, Hitler actually wanted to do what was right but he had an illusionary way of going about it. He thought the Jews were from Satan. He was a vegetarian; he was in charge of what he ate and he really didn’t have that much ego. Everybody thinks he was an egomaniac but he wasn’t that egotistical. He let other people share the glory with him. But he was caught in a trap of his own making. He had some very powerful wrong beliefs in his foundation system.

Audience: That just goes to show you the danger.

JJ: Right. Illusion is the most dangerous of all because if you’ve conquered maya and if you’ve conquered glamour and you’re in illusion then you think you are a true servant of God and what you say is right. You can’t find any flaw in what you’re doing. Hitler swallowed some teachings that said the Jews were spawned by Satan from the days of Adam and Eve. He really believed that and he thought they caused most of the problems in the world so the obvious solution was to just get rid of them all.

He taught his guys this saying, “I even have friends who are Jews and you can have sympathy for them and feel for them as a human being but you have to transcend that and let it go because these guys have to be extinguished in order to bring in the new age.”

So he had this illusion and it was so powerful that it led him to do very destructive things. Illusions can be a very powerful negative influence. Jesus said to His apostles, “They will kill you and when they kill you they will think they are doing God’s will.” That’s because of the illusion they were in which caused them to  think they were doing righteous acts. Hitler thought the Jews were evil and the early persecutors of the Christians thought the same way. Just about every other religion had its persecutors who thought they were doing God’s will by killing somebody with a different belief system.

JJ: Yea, that’s an illusion because a person can overcome everything with pure intent and think that the gods or the masters are flawless. There is a lot of illusion in popular doctrines where God knows everything that’s ever going to happen and He’s up there paying attention to all details. He knows that I’m going to snap my fingers right at this moment. He knew that a million years ago. Why would He even bother with that? If you were God living a million years ago would you bother to look into the future to see me snapping my fingers now? Why would you even want to do that? (laughter)

Audience: My way of thinking is the right way, my religion, my political beliefs or whatever. I’m right and you’re wrong.

JJ: When people swallow their particular religion as ironclad truth, they can follow their religious principles, follow the commandments and do everything necessary and reach a certain level of advancement. They can be pure in heart but the flaws in their religion will follow them and these flaws will produce illusion.

For each thorn, there’s a rosebud…
for each twilight – a dawn…
for each trial – the strength to carry on, For each stormcloud – a rainbow…
for each shadow – the sun…
for each parting – sweet memories
when sorrow is done.
Ralph Waldo Emerson (1803 – 1882)