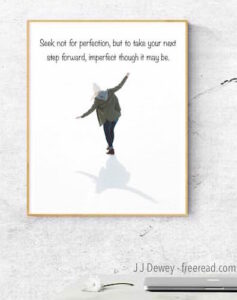 Some are questioning the idea presented that God may not be perfect. Let me add a few comments.

First, I have written quite a bit about this in the archives. If you do a search for the words “perfect” and “perfection” you should find some interesting material.

There are several points to emphasize.

(1) The Bible does not teach that either God or Jesus is perfect. Such teachings are based on mistranslations. It was the enemies of Jesus who sought perfection and crucified Jesus because he was not perfect, in their view.

(2) Wherever there is form perfection is impossible. All form is created through an imbalance of energy. If perfect balance were to be achieved all form would disappear and the universe would be no more.

(3) Wherever there is motion or movement there is imperfection. If there were perfection there would be no need to move from here to there.

(4) Where creation is not yet reached its end there can be no perfection for if a thing were perfect, it would not need to progress to any end other than what it is now.

(5) The true perfection of God is found in a joyful journey to an end never before realized in  this reality.

(6) We are created in the “image of God.” If you want to know how perfect God is then look at yourself.

Reader Comment: If God isn’t perfect, and he’s not expecting us to be perfect and we are just supposed to do our job, then I can basically never screw up, no matter what I choose, or can I?

JJ: Yes, you can screw up. You can refuse to follow the highest you know and not do that which you know you should do. You may  not be the perfect driver but you can still successfully drive to work and  back every work day.

Comment: But if God is imperfect and doesn’t know whether his experiment going to work out or not, that means I can’t rely on anything. I can’t even rely on the outcome being good.

JJ: On the contrary. It is totally within the power of God and his reflections to create a desirable outcome.

I have often compared God to a great painter like Davinci.

When he painted the Mona Lisa, he had a grand ideal in mind, but in the process of creation he made many mistakes. Perhaps he had to rearrange the smile a hundred times to obtain the beauty he desired. Finally, he had his masterpiece and he “saw that it was good.”

These are the words that describes the creator God in Genesis. As he created all things he did not declare they were perfect, but that they were “good.”

There is a law called the “Law of dominating Good,” that lies behind all that God has made and is progressing toward. The end of all things is always a good end because all things in the universe are guided by the intelligence of God. The end and the beginning are often planned and known, but that which happens in between is filled with many perils, heartache and frustration. The key to keep in mind is the words of Jesus: “He who endures to the end will be delivered.”

In other words, we must always persevere toward the goal no matter how many problems occur and then we will be delivered from failure and be able to enjoy the fruit of success.

Comment: I just keep wondering… how come we really care so much about achieving this goal? Why does God strive to be good?

JJ: Good is to move forward to where we have not gone before and evil is to move backwards and rest upon past achievements. Just as there is a natural impulse in all of us to progress and move forwards even so it is with God. All life must move forward to obtain eternal joy.

Comment: If I go by logic that would mean if “form” equals imperfection, “no form” equals perfection. Hence God was in a state of perfection before he decided to create.

JJ: It may seem that way at first glance but let us take a deeper look.

First, creation, or cause and effect, is an eternal process and there is only the space in between creation. Thus when we speak of the point before creation we are really talking about a point between creations.

Think about anything you have called perfect or near perfect. The perfect tan, the perfect house, the perfect child etc. This concept only has meaning when we are thinking about how a form looks or performs.

Conclusion: We have the concept of perfection and imperfection in the world of form, but in the formless world of origination this concept is meaningless. Perfection has meaning when form is in the process of creation or has materialized.

Another reader makes these interesting comments: My question is about psychic abilities. I have some sort of talent that works sporadic, not controllable (yet) but is there any way. Let me explain; one of these visions involved my family going for a ride in my dad’s bronco, him driving down a familiar road and an antelope or deer popping out in the road. As my dad swerved and tried the brakes, the brakes did not work, and he lost control of the truck, rolling it down a steep cliff, killing my family.

Once this vision was over, I had called my mom and pleaded with her to have dad check the brakes in the bronco, she told me that they were almost out the door going for a ride out in the country. She listened to me though, I guess there was a seriousness in my voice that got her attention, and she had dad check the brakes. He discovered that the brake lines had been corroded, and that there was only enough fluid in the reservoir to get out of the driveway. (In a sense, I may have saved their lives by calling their attention to this problem.) My dad fixed the lines, and they went on their ride any way. On the way down this steep windy road, a deer jumped out, my dad swerved and braked, just missing the deer and the edge of the cliff, the deer had actually kicked the door of the truck as he passed by.

My mom called me later that evening and told me if I had not called them and had dad check the brakes, she felt my vision would have been a reality. This is only one of many of these visions I have had, and some of them are of very near future events, and others are of events that are taking place currently, but across the world. Sometimes I see what a person is planning to do that is standing in line next to me at the store, and sometimes what that is sickens me because it involves sexual misconduct with a child. I don’t understand why I get these visions, and when I was younger, I tried to make them go away by drinking or using drugs. Some of these visions are confusing, because I don’t know what I am supposed to do about them. Sometimes there is nothing I can do, so I don’t understand why I “see” what I do. I know that I am tapping into a higher being somehow though, and that I am supposed to learn something from them. So I have been teaching myself how to utilize these visions in a way to help people by changing it slightly.

On some people, when I rub their feet or hands, I can “see” what dis-eases or health problems they might have. I have been working to learn how to use herbs to heal, and am teaching myself to recognize what herbs are needed to treat some of these ailments I “see.”

I allow nobody to pay me, nor do I want recognition for this, I refuse to go into business and make a profit off this talent because I feel that would be wrong. I have had a lot of people that I was able to help tell me to start a clinic or something, because they feel I’d make a good living. I don’t want any of that, I just want to know why do I have this talent, and am I doing right by God by using it to help others?

There are astral psychic abilities which are fraught with error and then every once in a while, we find a person with true abilities using higher perceptions. The main difference between the two is that the higher psychic will be accurate to a high degree whereas the lower will be lucky to have a 25% degree of accuracy. Also, the higher psychic will generally not seek to make money from his or her gifts.

You saw a true future, which is rare, but it was a fairly immediate future which is much easier for the soul to foresee than a distant one.

Any talent you find yourself naturally developing should be accepted and used toward maximum service to humanity. There is a tendency in many disciples to want to discard the gifts they are given and be rid of them and just blend in with the crowd. This the disciple should never do.

When a gift begins to develop one should cultivate it and use it in service. There will be frustrations in the process, but the end will be great satisfaction and joy.

On the other hand, some attempt to force gifts upon themselves that may run contrary to their life’s mission. The thing to keep in mind is that the naturally occurring gifts are a positive development.

No wise man ever wished to be younger.