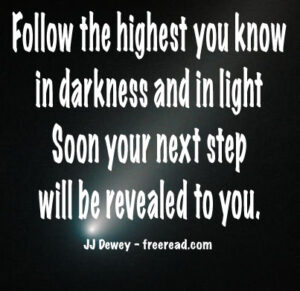 Audience: So what advice would you give us for this lifetime?

Sometimes we think, “I made this mistake. I’m condemned forever.” No, just keep on moving. The word ‘sin’ in the Greek means to miss the mark. When the ancient Greeks shot an arrow at a target and missed the target, they said, “Oh I sinned.”

Audience: The word is the same in Hebrew.

JJ: Let’s suppose we have the same attitude about archery as the normal person does toward sin. We shoot an arrow at the target and miss. Then one would say: “Oh I’m such a horrible person for doing this. I don’t deserve to shoot another arrow.” The archer doesn’t feel that way. He shoots an arrow at a target and says, “Darn I missed. Give me another arrow.” He doesn’t sit around for a year condemning himself. Through the process of guilt, we condemn ourselves so we take another year or two before we grab another arrow. We spend a long time condemning ourselves and this just wastes our time.

Someone asked me about atonement. The true purpose of atonement was to remove this guilt so we can then take another arrow and shoot again. The true atonement of Christ removes us from the power of guilt. Guilt is the most destructive energy there is. Ancient Hebrews used to put all of their guilt on a goat then send it into the wilderness.

Audience: A fifth degree initiate is a master? And is guilt a glamour?

JJ: Yes, fifth degree initiates are masters. It’s not a glamour. It’s an illusion that needs to be overcome. The person has to transcend some illusion to get rid of guilt entirely. Maybe not all illusion, but he has to transcend quite a bit of illusion because guilt is caused by an illusion. Part of the illusion is that guilt is really important, that it  is your conscience, that’s God speaking to you when you feel guilt. No, it’s not God speaking to you when you feel guilt. It’s what’s in your lower self that’s speaking to you. I don’t feel guilt over anything anymore but that doesn’t mean I go run people down because I don’t like them. Use your mind and say this is right and this is wrong. Now when I make a mistake, I feel like an archer shooting at a target. “Darn, I made a mistake. What can I do to correct it?” I make the corrections and try not to repeat the mistake. It makes you move along faster. The guy with no guilt and good intentions will move along much faster than the guy with guilt.

Audience: Are we programmed from the time we’re little from our parents or our religions to feel guilty? I know we sometime beat ourselves up so bad it may even take ten years to get past. Then you realize you’re wasting part of your life but where does guilt come from?

JJ: Let’s suppose you had a baby die and it meant everything to you. Maybe you didn’t give it enough attention or give it the right medicine or something like that. People will spend their whole lifetime condemning themselves over something like that, but you just have to realize you did your best and let the guilt go. It’s an illusion. You’re right though. What you’re taught when you are young feeds you with lots of guilt. I had lots of guilt when I was young because I was in the church and felt guilt over quite a few things. Martin Luther who established Lutheranism felt so guilty that he was confessing things a dozen times a day.

JJ: Even prayer doesn’t do it. When I was under the illusion of guilt I prayed like crazy and it didn’t help at all. What makes the correction is the understanding of the illusion. When you see the illusion, the guilt unravels instantly.

Audience: What about an affair?

JJ: A person who is beyond guilt probably wouldn’t have an extramarital affair toward a faithful spouse because of his spirituality. That would be a backward move for him. On the other hand, many who suppress guilt will do this. Transcending guilt and suppressing it are two different things. Suppressed guilt will eventually come back to bite the person with interest as well as darken his spiritual vision.

Many difficulties which nature throws in our way, may be smoothed away by the exercise of intelligence. Titus Livius (59 BC – 17 AD)