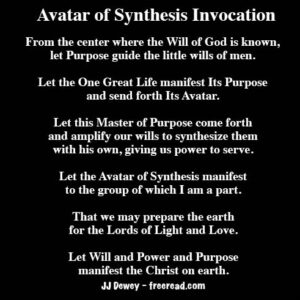 JJ: Ok. Where’d Barbara go? Oh there she is. I can’t see you. It’s like Magellan’s ships. (laughs) She’s such a high consciousness she’s hard to see.

JJ: Do you still have that little vial of stuff? Well, just bring it on up. Tell us about it.

Barbara: This is spikenard. Probably a lot of you have heard about it or seen it or read about it. It’s what was used to anoint Jesus’ feet by Mary Magdalene. It’s a sacred oil. I’m not an expert in this. It was used at that time for sacred events. It was very very expensive and it still is expensive. My guidance asked me to get this. Then on this trip they asked me to bring it. So I made the offer to him if he felt it was to be shared with all of you, then to speak out. So I guess that’s what we’re going to do. We’re going to share it with all of you.

The group says the Avatar of Synthesis Invocation as follows:

“From the center where the will of God is known, let Purpose guide the little wills of men.”

Group: “Let the One Great Life manifest his Purpose and send forth his Avatar.”

Group: “Let this Master of Purpose come forth and amplify our wills to synthesize them with his own, giving us power to serve.”

Group: “Let the Avatar of Synthesis manifest to the group of which I am a part, that we may prepare the earth for the Lords of Light and Love.”

JJ: First of all just think and contemplate the day for a minute so we can get ourselves in the right frame of mind to receive. Concentrate on being receptive to the higher energies.

JJ: Now let’s say the last sentence of that again: “Let Will and Power and Purpose manifest the Christ on earth.”

JJ: Now say this, “Let Will and Power and Purpose manifest the Christ in us.”

Group: “Let Will and Power and Purpose manifest the Christ in us.”

JJ: Now one thing that we experienced last time we did this was a natural rocking. We just kind of go back and forth. So if you feel that urge just go with it. It produces a kind of flow of energy.

JJ: There are many beings waiting for the return of Christ within. Not only is the Avatar of Synthesis prepared to assist, but the masters, the angels, many advanced human beings are aware of the situation. Many are awaiting the coming of the Master

Now imagine that we’re out there eating lunch again, and He comes and sits at the table. He’s sitting right across from you. Just imagine He’s sitting there out of the blue and He’s the Christ. Nobody told you that He was the Christ. But you look in His eyes and you really wonder who this guy is. It warms my heart the look upon His face. And He smiles a knowing smile…

JJ: In that knowing smile you see more wisdom than you see in all the people in your life.

JJ: Now, repeat after me: “I am a receiver for the gifts of Heaven, revelation, and communion with the soul.”

Group: “I am a receiver for the gifts of Heaven, revelation, and communion with the soul.”

JJ: Do you think it would upset people in the kitchen too much if we did the Hosanna shouts now? No? Ok. Not all of you have done this before, but we repeat this three times. Each time we repeat it louder. The third time we shout out as loudly as we can, and then we have a period of silence. We remain in absolute silence for a few minutes. We concentrate on receiving revelation, on communication from your soul and the higher realms – we just see what comes through each one of us. It goes like this: “Hosanna, Hosanna, Hosanna, to God and the lamb, forever and ever and ever, Amen, Amen, Amen.”

(silence for a few minutes)

JJ: Repeat after me, “Let the Avatar of Synthesis touch us with his spiritual power now.”

JJ: Repeat this sentence, “And thus I stand.”

Group: And thus I stand.

Group: And thus I receive.

Group: And thus I give out to the world.

Group: As I give out I am renewed.

JJ: “I am a point of fire within a greater fire, which is this group…”

Group: I am a point of fire within a greater fire, which is this group…

JJ: “…replaced together as one flame;”

Group: …replaced together as one flame;

JJ: “connected until we meet again.”

Group: connected until we meet again.

JJ: “I send the fire in circulation…”

Group: I send the fire in circulation…

Group: …and feel it returning to me…

JJ: “It burns all that is undesirable leaving only the good.”

Group: It burns all that is undesirable leaving only the good.

JJ: “The good, the beautiful, and the true remain, always.”

Group: The good, the beautiful, and the true remain, always.

JJ: Visualize in the center that the Christ himself is manifesting in a white robe, standing a few feet above the floor, looking upon us.

JJ: Speak to him: Thank you.

JJ: He smiles and raises his hand in blessing. (inaudible)

Besides anarchy, the worst thing in this world is government. Henry Ward Beecher (1813 – 1887)