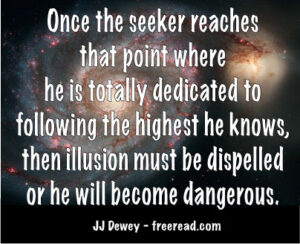 Gathering 2004 Part 33
The Mystery of Illusion

Audience: I think the biggest illusion that has the most damning effect on people in the category you’re talking about, that is the idea of the infallibility of their scriptures and the leaders who are in place. In your church leadership you want to ascribe that these guys know what they’re talking about and that we can turn our salvation over to them and it’s in good hands.

JJ: That’s a good point. In order to overcome illusion, which is the next thing we’re going to cover, the person has to unravel everything that has been incorrectly taught to him. To unravel it, first of all he has to overcome this infallibility thing. He has to realize that nothing is infallible except the spirit of God within him. That’s the only thing that’s infallible. Everything out there is fallible, the priest, prophet, scripture and any writing out there will have faults in it that have to be discerned.

Once he reaches the point where he realizes there is no such thing as infallibility from without, the next thing he has to do is to examine himself and use logic and reason. Reason is something a lot of people just want to escape and not deal with because it takes effort.

Using this logic a person can unravel illusions. I’ve taught this to many Mormons and haven’t had one who was really into the church agree with me. I’ll say to them this, “According to Joseph Smith’s teaching that if there is a beginning there is an end, if there was a beginning to you holding the priesthood that means there will be an end to it.”

He replies, “Oh no, no, no. You’ve got that all wrong.” I say, “Well, that’s what Joseph Smith taught. He said if there is a beginning there will be an end. The only way you can have the priesthood forever is if you already had it forever. That’s the only way according to Joseph Smith’s teachings.

He says, “Oh no. I was given the priesthood.”

If you had it forever you couldn’t have been given it. You can only have it awakened within you. The priesthood is the authority of God. If you are a god like the scriptures taught and like Joseph Smith taught and Jesus taught, if ye are god then you already had the power of God. In the scripture itself it says that the priesthood is the key to the knowledge of God so when you have the key to the knowledge of God, wouldn’t you have the priesthood? Doesn’t it say that you’re merely ordained and given something so you can actually discover what the true priesthood is? Didn’t Joseph Smith say that most people didn’t have the fullness of the priesthood?

You can use this logic and reason on anyone who is caught in a glamour to the extent they can’t get to the illusion. I’ve told this to several hundred Mormons and all of my family who are Mormons. I’ve run this by them and they will not follow the reasoning. If you follow the reasoning you have to come to the conclusion I mentioned. If there is a beginning to your priesthood there will be an end to your priesthood.

Either you already have the priesthood and have always had it or you have it now and it will end.

Audience: Either that or Joseph Smith’s statement that’ if there is no beginning there is no end’ is incorrect. It’s a very simple argument to put those two pieces together.

Audience: In my own experience I’ve found that when I begin to do that there was a fear that I might be reasoning incorrectly or that I might come to the wrong conclusion. Things that I realized that helped me to get over that fear is realizing that when I learn a thing is wrong, I’ll change.

JJ: Right. Sometimes you will come to the wrong conclusion but you can’t let that stop you because you have to have faith in yourself that sooner or later, you’ll find out what’s right. When you take a path and there are seven different paths but only one of them takes you where you want to go; but don’t know which one, you try one and if it’s wrong you try another until you finally get the right path. You have to have faith in yourself that you will do this.

Audience: It’s okay to be wrong and being wrong is part of the process of learning. A lot of times we’re told, “You don’t want to be wrong. You don’t want to make mistakes because that causes pain.” But without that experience you won’t ever achieve things.

JJ: People are wrong all the time. Someone predicts a hurricane will be gentle but a lot of people die. People say, “It’s God’s will if they die.” That wasn’t really the way that it worked. It just happened to be the combination of events went together. Someone who is really in tune with the spirit may have escaped it. If you look at plants and crystals, there are lots of imperfect crystals out there. Was God wrong in making that imperfect crystal? Some will say, “Oh no. God wanted that crystal just the way it is.” Not necessarily. The life of God is trying to make a perfect crystal and they don’t always turn out perfect. But eventually at the end of creation, everything does reach relative perfection. In between the beginning and the end, the life of God, which is the same as us, makes many mistakes until eventually we get the final version.

We eventually overcome illusion, as represented by the transfiguration of Christ on the Mount. It was also represented by Paul when he had his encounter with Christ and Paul was blinded. That blinding, or merging into the light of Christ, is a symbol of the time that you are overcoming illusion.

Audience: Could you say as a principle then that if you really wanted to overcome illusion don’t just look at your beliefs from the top but really try to discover what your true foundation beliefs are and examine them first.

JJ: That’s the first step. Examine your foundation beliefs. The Christ and His hierarchy will not trust anyone to be an accepted disciple until they’ve overcome illusion. Until you’ve overcome, not only maya where you’re able to be a faithful spouse because you have control over your appetites, and not only glamour where you’ve overcome the ego. If you’re caught in illusion you can still be a very destructive person like Hitler. They will not trust a disciple or take him into their auras until he has overcome illusion. Even though this is technically the third initiation, it’s called the first major initiation because overcoming illusion is so important. Even if our intentions were pure, someone could present us a philosophy that could sound really good and we could get caught into it and not examine it correctly.

Audience: When does one know if one has overcome?

JJ: You’ll know you’ve overcome illusion when you meet your dweller on the threshold. Not until that point. Once you’ve overcome illusions, you can hear some philosophy that may sound good and maybe even consider it for awhile but eventually you’ll work your way through it so you won’t get caught in the illusionary aspects of it. You won’t have a dangerous pull.