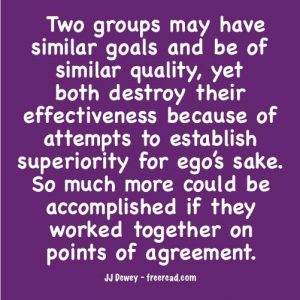 (C) The feeling of specialness.

We are skipping (B) Unearned Authority in this treatise for I have already written extensively on this subject. Rather than repeat myself, I will direct the reader to my book “Seeker’s Guide to Soul Contact.” Unearned authority is covered in sections 103-132 and can be accessed free at this link:

Many students who are concerned with dangers related to the ego feel too many groups create a feeling a specialness for their members.

While it is true that anything that inflates the ego should be neutralized some groups do have a unique purpose and mission that is sometimes misinterpreted as specialness that enhances the ego.

Instead of calling these groups special I would suggest that “unique” is a more appropriate word.

First, let us examine specialness in the negative context as it relates to groups. What are the ingredients that would cause the power of the ego of the members to be amplified?

The first and prime ingredient is the tone set by the leader or leaders. Egos are definitely stroked if the leader is a messiah figure – that is one who presents himself as a very special person. Such a leader may claim he is the reincarnation of Buddha, Jesus Krishna or other historical figures. He may claim that the manifestation of the new age   or some type of salvation rests entirely on following his instructions.

In most cases this feeling of specialness is caused by illusion. Such groups often have an average leader at best, are not doing anything to save the world and have doctrines that are below average in the percentage of truth.

Among common illusions found in many special groups are specific prophecies giving dates for the end times, some type of calamity or significant event. The group feels special because they are in on the inside information and others are not.

Time and time again these predictions fail. Unfortunately, a new false prediction takes its place and most members hang on still feeling special to be in on the new date.

The second main cause of specialness lies at the feet of the individual group members. In this case the leadership and teachings may be sound but one or more members may feel they are special for a number of reasons. Among them are:

(1) They have a “chosen” feeling because of the quality of the group.

(2) They think of themselves as more evolved than others and deserve some recognition.

(3) They think they know more than the leader or teacher and should take their place.

To these DK gives some good a dvice:

If you can indeed feel, think and function as one complete unit – several personalities and one soul – it will then be relatively easy to extend the concept to a broader inclusiveness, to broaden your horizon and thus become inclusive in a much wider sense.

The using of the mind to this end involves an aptitude to learn the distinction between analysis and criticism. This is a hard and well-nigh impossible thing for many to learn. Traces of illumination of this subject will show themselves if the group persists in all earnestness. The members have to learn to respond, as a group, to the same spiritual, mental and human ideas, and thus swing – as a “telepathic unit” – into one united train of thought. They have, as a group, to be preoccupied with the same things which are indicated by the soul of the group, and not by one person in the group, as is apt to be the case. They have to learn, as a group, to hold the mind steady in the light – the group mind, and not their individual minds. Esoteric Healing, Pages 354-355

Then a problem for constructive groups sometimes occurs when members try too hard to see all individuals and groups as having a sameness about them. They see a sameness in all groups, “one is no better than another,” they say. “We shouldn’t see ourselves as special.”

What has to be taken into consideration is this. Each individual and group is different from all others and some groups have a unique purpose. Again we use the word unique here for the word “special” tends to appeal to the ego.

Some groups have a unique and distinct purpose different from all others, and others not so much.

For instance, there are many groups dedicated to meditation who have a similar approach. They perform a good service but are not special or unique. That is fine. They do not need to be.

On the other hand. There are numerous groups that do have a unique purpose different from any other exoteric group. Here are some possibilities.

(1) A group is interested in studying and understanding the teachings of a certain author, around who there is no group formed

They form one and thus have a unique situation.

(2) A group sets a goal to promote a certain part of the Hierarchical plan that no one else is attempting.

(3) A group has established unique ceremonies not used by anyone else.

(4) A group is inspired by the Hierarchy to perform a unique labor.

One thing to keep in mind is that the Hierarchy rarely duplicates its efforts as they follow the Law of Economy. They try to not have one group they work with overlap and duplicate the efforts of another.

For instance, DK established a unique group that some would call special. At the time it was the only exoteric group like it that was endorsed by the Hierarchy.

DK however went out of his way to not stroke the egos of the members and make them feel special, but did comment that the group was a one of a kind experiment.

The biggest complaint did not center around specialness but if some did not agree with the instructions the members sometimes accused Alice A. Bailey of making up the instructions instead of getting them from a Master.

seek not to link groups with your group, but recognise your group and all other similar groups as parts of a worldwide spiritual movement which (when it reaches momentum) results in unity for all. A super-organisation which emphasises unity is the last thing to be desired; a multiplicity of living organisms held loosely together by cooperation, constant communication and possessing identity of goal and of purpose is what the world needs today…. Discipleship in the New Age, Vol 2, Page 458

He doesn’t want to see groups merge together into a super group but many different and unique parts are needed to create a vital whole. Just as in the one body the liver has a much different role than the heart but both contribute to the one life in the body, even so, can we have many groups with unique functions yet recognizing their oneness in the living body here on planet earth.