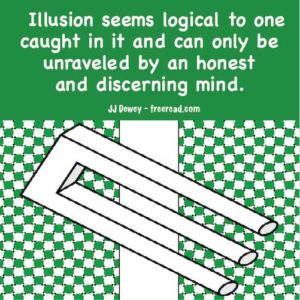 A reader quotes me as saying this: “Any false conclusion always involves flawed logic. Perfect logic will never lead to a wrong conclusion.”

One question: Have you ever in your life taken a course in formal logic?

JJ: I wouldn’t waste my time. I’ve looked them over and talked with people who have taken them and using what they have been taught as a logical method leads them to some of the most illogical conclusions.

Logic and pure reason is recognized by the soul and it is almost impossible to teach it to someone who has not had some development in his mental body.

Reader: I can appreciate your experience with some “logicians,” however to say “I wouldn’t waste my time” sounds to me like a particularly prejudiced approach (“prejudice” as to “pre-judge without full knowledge”).

JJ: One never has full knowledge so I guess everything every person does is prejudiced in your view.

If someone comes to me with a new religion and I take a look at a few things in it I can conclude pretty quickly how they think on almost any topic or point of doctrine and be extremely accurate.

Why? Because I have studied many religions as well as the scriptures and this gives me a good idea to accurately conclude how they think without reading every manual they have produced.

Conclusion: It would be a relative waste of my time reading all their materials for it would be obvious to me that my time is much better spent elsewhere.

I have always been interested in logic and would have taken a course in it in college if it had been available at that time. Later I did come across some course materials and after doing a little reading I found I did not miss much. I already inherently knew all the principles included in it. I also have talked with people who have taken logic courses and have been preached to for not being logical by those who obviously are using flawed logic from their course.

Reader: My suspicion for years has been that when you use the word “logic” that you more likely mean something like common sense (perhaps with a touch of intuition) or natural reasoning. This confirms that suspicion.

JJ No. I mean exactly what I say. When I use the word logic I mean it as defined in the dictionary which is: “the science of correct or reliable reasoning.”

Logic does not involve intuition, but that which is derived through intuition is always logical.

Reader: The reason that I asked you if you had ever taken a course in formal logic is because it is apparent that a sophomore student of logic in his second week of the class could refute your claim that:

“Perfect logic will never lead to a wrong conclusion.”

JJ: Since your grade level is above that this should be easy for you to do then. Let’s see you provide an example.

Reader: In fact, flawless logic can easily lead to an incorrect conclusion because logic is primarily about method, not content.

JJ: Where in the world do you get this idea??? If the courses teach this then no wonder many college graduates are illogical. You are starting with a huge gaping hole in logic to begin with. Content has everything to do with logic because method must apply and begin with the content. To start with content which is obviously incorrect is not logical. Remember that “reliable reasoning” is in the definition of logic. You cannot have reliable reasoning if you start with a flawed premise that you assume to be true.

For instance, assuming the moon is made of green cheese is an illogical first step as a basis for the discovery of truth.

Reader: Logic, for example, says that if the premises in a deduction are correct, and the method (logic) is in the correct form, then the conclusion must be true. What it does not say, or prove, is whether the premises are themselves correct and true.

JJ: But this is the most important step there is in logic. One must first look at the premise and conclude the probability of it being true in all circumstances. To start with the idea that the premise is infallible is not logical.

Reader: For example, here is the classic Greek Syllogism taught to thousands of college sophomores every year:

The first two lines above are the premises. The third line is the conclusion and it must be true if the premises are true (but again, logic tells you absolutely nothing about the validity of the premises).

JJ: Logic tells you a lot about the premise. We know that every Greek in history of which we have record has been mortal and died. There is a small probability that an immortal Greek exists and this must be factored in. The logical person will never accept a premise just because it is written in black and white.

All bears fly. Lassie is a bear. Therefore, Lassie flies.

This is an example of “perfect logic” and indeed Lassie would fly if the premises were true.

JJ: This is FAR from perfect logic because it begins with an illogical premise. There is no such thing as good logic if the premise is not first examined using the logic in the laws of probability to conclude how likely it is to be true.

Reader: Of course, we know that bears don’t fly and that Lassie is not a bear. It is the premises that are faulty, not the logic. The logic itself is flawless.

JJ: Logic must examine the premise or no true logical method even exists. If this is not done this logical method is completely useless, hence illogical.

Reader: For example, let us say that you hear something about a particular philosophy or religious creed that catches your interest. If you decide to investigate, then what is the most efficient method to begin? I would say that it would be to look at the premises, that is, the initial assumptions of that system of thought. These ARE the foundations. If these foundations are solid then you begin to work upwards from there. If however the foundations are built upon sand then one can safely abandon that study and go on to something more likely to be useful.

JJ Looks like we are on the same page here, but I would call this a prime part of the true logical process.

Reader:  No, the real usefulness of the study of logical fallacies is in helping one in one’s “personal navigation” in finding truth. If one truly understands these basic principles then one can quickly dispense with that which is obviously invalid and have more time to focus on finding truth.

JJ For some, the study of logic may be very helpful. I was speaking for myself in reference to how beneficial a course may be.

Reader: I appreciate that perhaps you have a unique approach to finding truth. However, I think you have a prejudice here that will come back to haunt you in the future. That is indeed unfortunate.

JJ: My approach has worked well for me and not once since my birth in 1945 has my logical approach (or results thereof) come back to haunt me. On the other hand, there are hundreds of advances I have made that are partially due to my open minded and logical approach. If what you say is correct something would have surfaced by now that should be haunting me. The only problem I have had with logic is when I sometimes slip and do not take the time to fully think a subject through.

Earlier you said: “…apparent that a sophomore student of logic in his second week of the class could refute your claim that:

“Perfect logic will never lead to a wrong conclusion.”

I am still waiting for anyone to refute this.

I notice that during this past month on every single day, Jim takes his dog for a walk at eight in the morning.

I conclude therefore that tomorrow he will do the same.

But then something unexpected happens and Jim doesn’t walk his dog.

Therefore, this and other logical conclusions are wrong.

The problem with this thinking is the person is presenting a logical expectation, not a solidly  logical conclusion.

He sees Jim walking the dog 30 times in a row so he expects it to happen on the 31sst day.

If he is truly logical he  will not conclude that there is a 100% probability that the next day will be  like the previous ones. It would be logical to bet on the  possibility that Jim will be walking his dog, but it would  be illogical to conclude it is a sure thing.

All future possibilities are probabilities and there is always a chance expectation will not be realized.

The sun has risen every day for billions of years and we expect it to happen tomorrow, but the probability is still not 100% Maybe it would go supernova tomorrow.

True logic always factors in the laws of probability and rarely comes to an infallible conclusion.  The only exception would be math where the probability of 2+2=4 is as close to 100% as anything in this universe of time and space, but even here there is a possibility that our understanding of math is an illusion so it is always wise to factor in the idea that any conclusion could  be wrong.

On the other hand, if Jim walked his dog for 30 days in a row, I would be willing to place a bet that he will do it again tomorrow. That is a logical expectation, but not a black and white infallible conclusion. I could always lose the bet.

No degree of dullness can safeguard a work against the determination of critics to find it fascinating. Harold Rosenberg