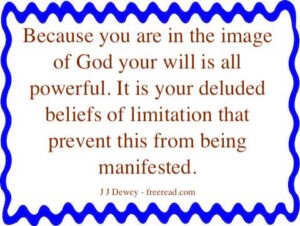 “And the seventh angel sounded; and there were great voices in heaven, saying, The kingdoms of this world are become the kingdoms of our Lord, and of his Christ; and he shall reign for ever and ever.” Rev 11:15

Finally, the seventh angel sounds his trumpet. The full power of the seventh chakra is now, not only open, but awakened, and full power in heaven and earth is given to the disciple who has now become a Christed one. Jesus spoke of this when he said:

“And Jesus came and spake unto them, saying, All power is given unto me in heaven and in earth.” Matt 28:18

Even though he said this, to normal eyes, it did not seem to be true. Why? Most of his followers were killed, his organization corrupted, his teachings misunderstood and the message of love seems to have been trodden under foot for 2000 years.

One would think that if he indeed had all power in heaven and on earth that he would have used at least a small portion of that power to insure the triumph of good.

“Jesus is just sitting back letting us making fools of ourselves and then at the right moment he will use his power and destroy the wicked,” says the believer.

But the real question to ask is what if the Christ not only has had all power as mentioned but has always used it just as the scripture indicates?

This is indeed the case.

But, if all power is in play why do we not see it?

The answer is we do.

Let us go back and look more closely at this verse.

“And the seventh angel sounded; and there were great voices in heaven,”

Keep in mind that this not only refers to Jesus but any disciple who reaches this great stage of progression wherein the seven chakras are open and awake.

When the disciple is thus fully awake in the highest of the seven centers he hears “great voices in heaven.” This tells us that he receives revelation, and, not just any revelation, but “great” revelation from the presence of God.

And what is this great revelation?

The latter part of the verse gives it: “The kingdoms of this world are become the kingdoms of our Lord, and of his Christ; and he shall reign for ever and ever.”

Instead of seeing this as a granting of power from God to the disciple one must realize that instead it is a realization gained by the disciple that the power has been there all along.

In the past he was deceived by the adversary described in Matthew:

“Again, the devil taketh him up into an exceeding high mountain, and sheweth him all the kingdoms of the world, and the glory of them; And saith unto him, All these things will I give thee, if thou wilt fall down and worship me.” Matt 4:8-9

As he was becoming aware of his mission, but before the awakening of the seventh seal, he was deceived into thinking that a great adversary was the “God of this world” and controlled its kingdoms to the extent that this adversary could grant them to whomever he wished. All the disciple need to do was fall down and worship the adversary and a polluted power would be granted.

The “great” voice, or revelation, awakened him to this great unveiling. No adversary of God, or the good, ever controlled the kingdoms of the world. The world and its kingdoms has been, is, and will be dominated by the will of God. As he retreats again to the “silence in heaven” he sees the world from the vantagepoint of the eternal now, or the past, present and future of the kingdoms in their wholeness. From this wide angle of vision not only does the adversary have no power, but there is no devil and no adversary.

An adversary could only exist in a state where the individual involved does not have all power. If all power exists then any supposed adversary is as nothing and completely powerless. With no power against the good there is no adversary.

Thus does the Christed one awaken to a higher level and sees that in this awakened state that all events touched by him while aware of the will of God will be moved by that all-powerful will to the desired end. He sees the power is in the end and because he sees the end from the beginning he is aware that he and all others who are agents of will have all power in heaven and earth.

He realizes this is a great revelation because it gives him power to continue, to move forward no matter what the appearance of things are in the present. Now he can see the end from the beginning the present loses its power of distraction. He is internally exalted by this awareness.

“And the four and twenty elders, which sat before God on their seats, fell upon their faces, and worshipped God, Saying, We give thee thanks, O Lord God Almighty, which art, and wast, and art to come; because thou hast taken to thee thy great power, and hast reigned.” Rev 11:16-11-17

He sees the 24 Elders again that were in the beginning of the vision. They are seen again but in a different light. This time, instead of seeing himself as separate from them, he sees himself as being one with them and understands that God has indeed taken his “great power, and hast reigned.” He has always reigned. The power of God has always been with him and he has not seen it until now.

Now he sees the power he understands that it works differently from the higher angle of vision than understood from the lower vision.

The lower man sees obstacles that get in the way and he feels defeated and powerless.

To the one who sees “all power” the obstacles in the present mean nothing. He knows he will persist and that power of persistence, when divine will is seen, causes all obstacles to melt in time causing manifestation of the vision to occur.

“And the nations were angry, and thy wrath is come, and the time of the dead, that they should be judged, and that thou shouldest give reward unto thy servants the prophets, and to the saints, and them that fear thy name, small and great; and shouldest destroy them which destroy the earth.” Rev 11:18

As the disciple looks into the future, seeing all as in the NOW. He sees the nations are indeed angry as higher will begins to dominate and the Old Guard loses their power.

The dead are those who could not adapt to the higher purpose and history itself will judge them as being insignificant in stopping progress.

As higher will begins to unfold the true servants of God and humanity reap what they have sown and receive their just reward.

Finally, those who destroy the earth are themselves destroyed when the building, began by the disciple, finally takes shape. The true disciple, or Christed one, builds and gives life. Those who seek to destroy rather than build fall away and their power evidentially is destroyed.

“And the temple of God was opened in heaven, and there was seen in his temple the ark of his testament: and there were lightnings, and voices, and thunderings, and an earthquake, and great hail.” Rev 11:19

Before this higher vision the temple of God for the disciple was on the earth. At first he thought it was a stone building. Later he saw it as his own body. Now he sees something different. He sees that eternal life consists of merging his consciousness with the temple in heaven wherein lies the presence of God. When he does this he discovers the true Ark of the Covenant which contains all knowledge through the Oneness Principle.

When he obtains this vision and awareness he experiences additional:

(1) Lightenings:; His understanding and wisdom increases. (2) Voices: Additional revelation comes (3) Thunderings: He continues to awaken to even higher levels. (4) Earthquake: His belief system still continues to change. (5) Great Hail: He finds that which he builds is eventually destroyed and replaced by the new. This is an eternal cycle.

Let us move on to the next chapter.

“And there appeared a great wonder in heaven; a woman clothed with the sun, and the moon under her feet, and upon her head a crown of twelve stars: And she being with child cried, travailing in birth, and pained to be delivered.” Rev 12:1-2

What is the woman and the symbols surrounding her?