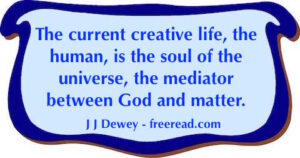 Gathering 2004, Part 20
Masters of the Universe

JJ: As above, so below. The soul of us is what? What is our soul?

Audience: It’s the midway point between matter and spirit.

Audience: I heard that the earth is the garbage can of the universe because it is the worst place to go yet it is highly desirable to complete our progress here. We are also sent to other places, other universes, for other experiences. How does that tie into what God is doing? With these other people in these other places?

JJ: For one thing the Earth isn’t the worst place to go. There’s a lot worse. A couple million years ago it was worse than it is now. Mars is a lot worse than this. Have you seen pictures of Mars? It’s a bunch of red sand and you choke on the air because you can’t breathe it.

Audience: I’m talking about where there are people.

JJ: There are all kinds of different places in the universe. There are places that are completely controlled by the dark brotherhood. Imagine what Earth would be like if Hitler dominated the whole thing. Some planets are dominated by Hitler-type figures. Most of them escape that in their evolution. They escape the conquest and the Brotherhood of Light overcomes the Dark Brotherhood. There have been some close calls. Where there is complete domination of a Hitler-type figure for a long time, it’s followed by destruction of most of the people on the planet or somethimes the entire planet. Some people theorize that the asteroids were once a planet that was blown up.

What makes this earth a little different is the Hierarchies that govern our solar system sent high intelligences to come assist us in our evolution. Without this assistance we’d still be almost like the savages. On many other planets they’re still in the savage state. This planet is different because we’ve had assistance. The Sons of Mind were sent to us to assist us in our evolution. These are basically our Solar Angels. Not all planets have this as the case. Because of this we’re one of the more progressed planets, relatively speaking.

Audience: But there are higher planets than us? There are more advanced beings that can travel.

JJ: Right and our Solar Angel is higher than we are.

Audience: So you call those Solar Angels that would be on another planet?

JJ: The Solar Angel doesn’t have a physical body.

Audience: What about on Sirius?

JJ: Sirius doesn’t have kingdoms like we do here. The life-form isn’t in actual physical matter. They’re in higher etheric matter. There are different physical matters but in this solar system the other planets do not have physical life like we do, but they have etheric life. On Sirius there are very advanced beings and the Brothers of Light but they’re in more refined matter than we are here.

Audience: An example is the beings that helped the Egyptians build the pyramids were from another star system. We didn’t do that. They came and assisted with space craft.

JJ: That’s what a lot of people think.

Audience: Do you believe we’re evolving to a more simplistic type of situation or do you think it’s becoming more complex?

Audience: But we aren’t evolving backwards?

So to create the complex you need to understand the simplicity. If you don’t understand the bare bones simplicity of things then you cannot create the complex that works. Many Harvard professors are unable to create anything usable because their mind operates on a complex level so they have too many facts going through their mind so they can’t do anything practical. If they had to run a business they’d probably fail because they have so many complex things going through their mind that they only see complexity whereas the guy who is innovative like Bill Gates who quit college saw things in simplistic ways and ended up created very complex systems.

Audience: Why would you say that we’re in charge of the whole universe when there are others watching us?

JJ: We’re the creators in the universe. The beings who are above us still work through us in the creation of physical things.

Audience: They’re watching us so we don’t blow ourselves up.

JJ: But we’re doing the creating. The Solar Logos doesn’t come down here and build a house. He doesn’t build a city. He hasn’t built any computers. We do that. We receive inspiration from lives more advanced than us. I’m not saying there aren’t lives more ancient than us. There have been past solar systems, many of them, where people have passed through the human kingdom. Solar systems are created and destroyed and created and destroyed but each time there’s a new creation a new round of human beings are created that are a little more advanced than the ones before. We’re going to do better than the Solar Angels that are guiding us. Meanwhile they are also moving ahead. There are higher lives ahead of us that guide us but we’re now the ones in charge of creating in the physical universe. We’re the creators of the universe. We’re going to do the physical creating and splice the genes and create new universal DNA.

JJ: They probably could, but their attention is elsewhere. They have other things that they’re doing, more exciting in their mind than what we’re doing. Our job is to be creators. We’re the new creators on the block and we’re going to be the ones who are going to mold the whole universe. We’re going to eventually move star systems and planets. Eventually we may go to Saturn and take the moon called Titan – it’s a little like Earth – we’ll move it out of its orbit and move it into the orbit that Earth is in so it will be a twin balancing us off. We’ll send a bunch of people over there and it will be like a Garden of Eden. We’ll actually move planets someday and move entire star systems. That’s the destiny of man. Millions of years from now we’ll be like gods compared to what we are now. If we think we can create now wait until we get near the end of our evolution. We will give form to the entire universe.

One thing that bothers scientists is they say the universe is expanding and there isn’t enough matter in the universe to draw it back in. They think that if there’s enough matter and gravity to draw it back into itself it could collapse into itself and we’d have another bang and things would keep going. But they’re worried that there isn’t enough gravity so it looks like the universe is going to expand forever and pretty soon everything will waste away and poof, we’ll never have another universe. But they leave out one ingredient in the equation. What is it? Humanity. We will eventually be able to control the forces of nature and be able to move planets and star systems wherever we want and actually give shape to the whole universe.

Audience: It seems to me that the most complex thing we can create is a child or an offspring yet it seems we really don’t have a clue how that’s being done. Is that really us creating that?

Now the creative power is us as human beings giving us power to create new things. Look at what we’ve done lately. We’ve created computers and cars and microwaves and we’ll continue to do that and more. People on other planets that are near our state of evolution are doing the same thing. Some other people on various planets are near the same state of evolution we are.

There aren’t too many who are capable of space flight the way people think. Most that are capable of space flight are in the higher etheric matter. Most of the space ships people see are not on the actual physical plane but on higher etheric matter. The planet Venus has people on it but not in the physical. It’s etheric. We have seven levels of physical matter. There is regular physical matter, liquid and gas. Those are the three on the physical level then above that we have four ethers that are invisible. We have the physical, ethers, the astral and all kinds of different dimensions and spheres. Many planets that we don’t think are inhabited physically have inhabitants in their higher spheres. The Ancient of Days came from Venus and He came in etheric matter. He still lives in etheric matter in Shamballa. He’s not in the actual physical even though He has incarnated a couple of times.

Audience: So when we’re visited by aliens, these are not physical? They’re etheric?

JJ: Most of them. Physical ones come only once every few thousand years. Some of the supposed aliens are implants from thoughtforms of various spiritual brotherhoods, some on our side and some not on our side. We don’t want to get into all that, but the truth about UFOs is different than what a lot of people think. The true benevolent brotherhood visiting us here in the physical is a fairly rare occurrence. They usually come at the beginning of a new period of evolution to help us develop our next great step in evolution.

JJ: We’re at a new age. It’s possible aliens could come sometime within the next thousand years again. I doubt if they’ll come in the next hundred or so years. I know everybody is expecting them to materialize right around the corner. They’ve been predicting that ever since I can remember. My gut feeling is that they’re waiting for us to develop space travel on our own before they come and meet us again.

Audience: Is the Christ part of that?

JJ: No. He won’t come in a space ship or anything like that. We talked about the Second Coming quite a bit. It’s in three stages. One is the establishing of the teaching of the Christ consciousness, which a lot of people understand now. The second is where Christ works by overshadowing various disciples and working through them. The third is He comes in a body of His own. It’s not determined if that will be necessary. It’s not given out exactly how that’s going to transpire. A couple things have been given out.