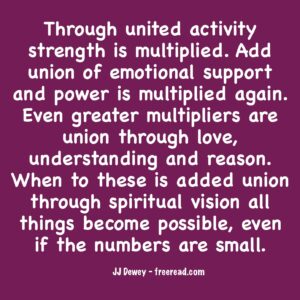 In the last general gathering the lights were gathered out of all of Europe and gathered to America. These people who were more enlightened got together. They said, “We don’t like the old system. Let’s create a new system.”

What if this same thing happened again? If those who were the most enlightened were gathered out and got together, would they do the same thing? Would they say, “We don’t like the old system. Let’s create a better system”?

Audience: If they didn’t, what would be the purpose of the gathering? If they don’t want to make a change, then why bother?

JJ: So, the question is how will this gathering take place? There are several ways it’s taking place. In the book of Isaiah it’s said that a highway will be cast up in the midst of the sea, a way for the redeemed to pass over. It says in the scriptures that the sea stands for the multitudes of the peoples of the Earth.

So a highway will be cast up in the midst of a sea of people. Water is a symbol of emotion. The highway on the sea stands for something that is on the plane of the mind, above the emotions. But what was Isaiah talking about? He was talking about several things. Ancient prophets always spoke on several levels. Do we see any super highway like this anywhere?

JJ: The internet, right. Is the super highway affected by emotion or is it only affected by looking at it mentally? It’s entirely mental. It doesn’t matter how mad you get at your computer. You have to get mental and punch the right keys to make it work. You operate entirely from the mind, even though many express great emotion. Only by hitting the right keystrokes can the correct effect take place.

So it’s a super highway that is above the plane of the emotions. The emotions have no power over it. The only thing that has power over it is the mind, which is symbolized by air. The highway is in the air on top of the water, or above the emotional level.

Audience: I have a question on that prophecy. It talks about coming from the North. I can understand the sea of people but how does the North fit in.

JJ: It talks about the ten tribes coming from the North. The word, ‘north’ stands for ‘as far away as the eye can see’ according to the Hebrew. They shall come from as far away as you can imagine them coming from on the Earth.

Audience: In Hebrew the word is more like ‘hidden.’

JJ: I need to be careful what I say with a Hebrew expert here. Assaf says ‘north’ means hidden. The ancients looked on the horizon as far as they could see. When they couldn’t see any further, it was hidden. That’s another way of looking at it.

Are we just going to gather on the internet or will there be a physical gathering, do you think? We’re physically gathered here for a few days and it’s nice to rub shoulders. Where can we gather so we can get together and create our own system of doing things? It’s impossible right now, isn’t it? You’re nodding your head like you understand. Will you tell us a little about your background?

Dan: I went down to Costa Rica to create something like this so I know what you’re talking about. It didn’t work out. It was internet based. It was called Lai*** Faire City.

Dan: That’s where it was based. The whole concept started years ago when they wanted to buy a piece of land or an island or somewhere where people could go and have their own free market, free enterprise, capitalistic system that was not imposed upon by other governments. When I got involved they hadn’t found any land. No one would sell them any land so it evolved into an internet based country. They had supposedly created this, kind of like Iran’s system where they went up in the hills to a hidden spot where they could be by themselves.

They supposedly had that all set up and it was set up so it couldn’t be imposed upon by the rest of the state governments in the world. When I got down there I found that wasn’t the case. What I tried to do was to build that protection system. As far as physically there were probably about ten programmers and as many as fifty people doing various things.

JJ: That’s a lot better than most of them.

Dan: Due to human failure, I don’t want to blame it on one guy but there was mismanagement at the very highest.

JJ: Too many chiefs and not enough Indians sort of thing?

Dan: One chief wasn’t a business man. He came by his money almost by happenstance rather than working his way up. He wasn’t a people manager and he knew nothing about the internet or programming computers and he was trying to manage all these people. There was no boss who knew what was going on so it failed. Everybody was fighting for their own way and there was nobody there to pull them together to unify them so it failed.

JJ: So it fizzled and everyone went back home?

Dan: No, there are still some parts of it that exist. The financial part, the digital money and that sort of thing which is called the digital monetary trust still exists in cyberspace. There are a few other pieces. There is still a bulletin type community where people can get together and talk and discuss capitalism and free market and that sort of thing but as far as having one place where it’s all pulled together, as far as I know that’s no longer there. Some of the programmers and individuals might have gotten together after it fell apart and started building their own communities. I got out of it so I don’t know.

They’re very independent and it’s hard to get half a dozen of them together because they argue so much. Each one will think his ideas are better than the others’. They don’t want anyone telling them what to do so, if a leader steps forward and starts giving directions they’ll rebel against him. I’ve met a lot of these people. They’re good people, but they’re just really independent. They’re at a certain state of evolution where they have a lot of the rebel in them. They would’ve made good soldiers during the Revolutionary War and would’ve been a great benefit to George Washington, but not so much in today’s world. They’re stuck in the past somewhat. They’re stuck in the Revolutionary war time while we moved ahead.

When neither their property nor their honor is touched, the majority of men live content. Niccolo Machiavelli (1469 – 1527), The Prince