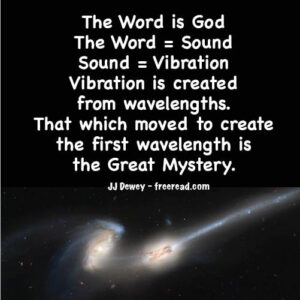 We might as well work on raising our vibration up some. One of the benefits of OM is that it destroys negative energy. It’s actually a destroying sound. People don’t really think of it as a destroying sound because they think of it as a sacred word that uplifts the spirit. But if used properly it uplifts the spirit because it destroys negativity. It destroys limitations that prevent us from raising our consciousness up. On the other hand, the AUM can be used for a building energy for it has building sounds. The hard O in the OM is the most powerful destroying sound.

What word can you think of that has this destroying sound in it? “OH, NO!” right? When destruction is happening around you, you say, “Oh no.” Isn’t it interesting how much that sounds like the OM? Another interesting thing about the OM is that if you say it over and over, “om, om, om, om, om” it sounds like you’re saying, “omomomom” which sounds like mom. That connection is interesting. The AUM repeated, “aum, aum, aum” sounds like ancient words used for father. So we have AUM or father for building and OM as a destructive word, even though it’s reversed to what it is in reality. This often happens. Some of the correspondences are reversed so that when they come from the higher to the lower everything materializes backwards. In this world mother builds and father is more of the destroyer but as far as the sounds representing them, the OM is the destroying word. There is a great mystery behind the sounds. I haven’t taught much on the science of the sounds yet but if you contemplate how similar ‘oh no’ is to the OM a lot of revelation is in store. It can be used to understand the powers of the sounds.

Audience: So we don’t want to use the OM because it’s destructive?

JJ: No, you do want to use it. You want to focus on anything negative that’s holding back the positive. Think on this when you say the OM. Sometimes in my life I’ll pick up some negative vibrations and not know where they’re coming from. So I say the OM over and over and think of destroying these negative emotions. It really works better than anything I’ve ever tried.

Audience: Can you say it to yourself?

JJ: Yes, I say it while driving down the road. That’s a good time. You can even say it silently. Saying the OM vocally is really just practice to saying the silent OM which can be done by the power of thought. The training wheels to saying the OM is to say it vocally. As we say it vocally, we think of what it does internally. I say the OM the most when I’m driving in my car because it’s an alone time. Nobody will think you’re weird. If you think you feel any negativity creeping in or you’re picking up negative vibrations, say the OM over and over, concentrating not on hurting any individual but just destroying the negativity.

If the negativity comes from a certain person, they’ll be a little besides themselves because they’ll feel a vacuum. It will be a strange feeling for them because they won’t understand why they’re being affected the way they are. Let’s concentrate on this.

One thing I like about this group is that it’s very positive. Everyone here seems to really enjoy each other’s company. Bryan and I were just watching the group and commenting to each other how much everyone seems to enjoy everyone else. So there may not be much negativity here to destroy but we can always elevate ourselves a little higher. Follow me in saying the OM. When you say it, visualize that anything that is limiting or taking away from a spiritual experience is being dissolved into nothingness. We’ll say several long OMs. Just follow along as I say them. OOOMMMMMMMMMMMMMMMMMM

This time concentrate on a light coming out from your third eye, first of all like a beam then spreading out until it encircles the whole room, the aura and all the atmosphere around you. OOOMMMMMMMMMMMMMMMMM

Strange as it seems, no amount of learning can cure stupidity, and formal education positively fortifies it. Stephen Vizinczey