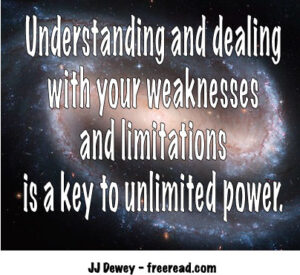 A successful business has X amount of capital. That’s their limitation. They aren’t going to spend twice the amount of capital they have within the next month. Then they’d fail. They examine how much capital they have and they spend within the range of what they have to make everything work. That’s what we need to do. We need to spend our energy within the range we have. We have to ask ourselves. Look at what’s going to happen tomorrow, next week, next month, next year.

Look at everything you know is going to happen then plan your life so that your limitations are not reached. Then you will be able to work toward being unlimited. By those who are watching you it’ll appear you’re working without limitation. They’ll think you’re really in charge of things but you’re in charge because you know what you’re not in charge of. You know that if they torture you enough, you’ll cry uncle. You know that if a good-looking woman (or man) comes on to you the hundredth time, just maybe something could happen. So if you think by the hundredth time that you might start to weaken, you don’t let that hundredth time happen.

If you’re positive you can handle four or five temptations, fine. If you’re not positive keep in mind there is always a wearing down effect. An example is the US interrogation methods. The military says torture isn’t standard procedure so they try to wear people down instead of torture them to get information out of them. We reward them with food or take goodies away and wear them down without torturing them but with pleasantries. It’s said that this will often work better than torture. Many people who can resist torture can’t resist something that feels good.

Getting back to the soul energy let’s review this point that it is possible to fall in love with anyone romantically if these barriers are removed. Beyond all the barriers of personality is the person’s soul. We’re capable of looking at anyone and seeing their soul. To let yourself love a person emotionally or spiritually we have to remove these barriers. When we looked in each other’s eyes, I think all of us could see that if we really remove the barriers and gave love to that person we could have a soul response. What did you feel Bill? Do you think you could receive a soul response from most of the people you’ve met?

JJ: How about you John?

John: Some people are easier than others.

JJ: True because some people have more barriers than others. When the barriers are let down, all of a sudden we are all equal.

JJ: You mentioned the things you have in common. If two people have the same religion, same philosophy, same political party they both like motorcycles and hunting and fishing but all of a sudden you look at the other person and you really like to like him or her because those barriers aren’t there. Some people say they don’t’ want a relationship with anybody who has a kid. So, even though they meet a person who they normally would like, the child is a big barrier. If the barrier is removed they could fall in love. Little things like that can be barriers that stop the energy dead in its tracks.

Audience: Do they have to? Say they’re best friends and they like everything about each other and the barriers come down and they see each other’s souls, do they automatically go to romantic love or what happens?

JJ: You can have either spiritual love or romantic love or both but if you’re looking for romantic love or you’re open to it then it can happen. If you’re married and the barriers are all down you’ll have a good relationship and if you’re committed. I’m committed to Artie but I like Lorraine and there aren’t many barriers so I share a spiritual love with her but it doesn’t interfere because I chose not to have it be romantic. On the other hand, if I didn’t have much moral compass I could think, “Hey Lorraine is available.” You could do something like that but that would be your choice. It’d be a bad choice but it would be a choice.

JJ: I’m saying they could be if they wanted to. For the logical person there is usually something that triggers romantic love. It’s either a decision or else indecision. Often romantic love comes from not making a decision to follow your highest good.

The woman meets a guy who is a member of Hell’s Angels and is attracted to him because he’s macho and she likes motorcycles so she lets her barriers down and it’s a disaster. She didn’t really decide that but she was sucked into it because of indecision. Romantic love is the result of either a decision or indecision that allows you to go with that flow. If you decide you just want to be friends with someone of the opposite sex you can share nice spiritual energies with that person. By spiritual energies I mean from friendship on up to divine love.

Audience: During the exercise I noticed that there were some I connected to better than others. Would it be my barriers preventing me from connecting with certain people or would it be theirs?

JJ: It could be a little of both. You were the same with each person, right? Then it could be theirs. There aren’t too many barriers you could have outside of their physical looks because you don’t know them that well.

Audience: But the way they interact with you could come into play?

JJ: Yes, that’s part of it too. Barbara gives a lot of attention. It’s probably a combination of both. You feeling different could be because each person is different and some have more barriers up than others. When you look into the eyes of ten different people you’ll see that some people have a reluctance to allow things to be shared and others really want to be outgoing. Those people who are outgoing make the sharing more fun.

Audience: I was going to compare it to biology where you have this different protein inside the molecules. With some the interaction is immediate and creates a bond even though it’s not a permanent bond and I think people are like that to a certain extent. We’re all human and the interaction could be part of who we are. With one person we might bring out one aspect and another aspect with another person who’s totally compatible so there are different interactions that show with different people.

Audience: Talking about soul mates and realizing that each person has a different make up and all that. Sometimes we find someone, maybe one person who kind of complements you very, very well. This person understands you better than any other person and who is willing to share the potholes you have in your life. Isn’t it possible to consider such a person as your soul mate? That one person with whom your soul is in agreement and alignment and sometimes you find the way this person accepts you is very different than any other person accepts you and somehow you find that unique feeling. Perhaps in the whole wide world there is just this one person like that.

JJ: You sometimes meet a person you feel a strong soul connection with and you feel like they’re your soul mate because you do share the soul energies with that person. When you meet them in a future life you’ll fall in love very quickly all over again. We have quite a few lifetimes before we reach liberation so there may be three, four or five different people you’ve been very close to. Hopefully you don’t meet them all at the same time. (laughter)

A man’s got to know his limitations. Clint Eastwood, Magnum Force