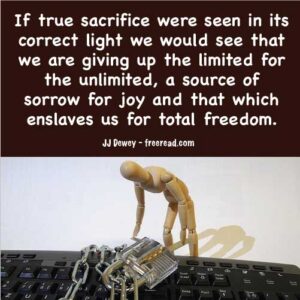 Let us examine the fifth seal:

“And when he had opened the fifth seal, I saw under the altar the souls of them that were slain for the word of God, and for the testimony which they held: And they cried with a loud voice, saying, How long, O Lord, holy and true, dost thou not judge and avenge our blood on them that dwell on the earth? And white robes were given unto every one of them; and it was said unto them, that they should rest yet for a little season, until their fellowservants also and their brethren, that should be killed as they were, should be fulfilled.” Rev 6:9-11

There are several important points to consider here. First note that the disciple was led to the opening of the first four seals by four beasts who kept saying, “come and see.” This time the pilgrim did not need to follow a beast but came to the opening of the seal through his own initiative.

It tells us that this disciple has finally taken steps to free himself from the mark of the beast and is no longer dependent on the lower quaternary. Instead, he now has obtained a degree of soul contact and has power to initiate on his own without being told what to do from the outside. His consciousness has now ascended to the Spiritual Triad of Atma (higher self) Buddhi (inspiration) Manas (higher mind). These are also represented by the heart, ajna (center between the eyes) and crown centers.

Even the Bible correlates mind and heart by the great statement: “As a man thinketh within his heart, so is he.” Proverbs 23:7

When the disciple learns to think within his heart he opens the higher mind, and fifth seal, which leads to understanding of higher spiritual (unselfish) love and the gaining of true wisdom not dependent on any of the authorities of the world.

There is an important point to realize here. Each seal that was opened so far was accompanied with much difficulty, pain and tension and this one is no different. In fact, the degree of difficulty increases as we move forward. The only advantage the disciple has is he becomes stronger as he progresses. He thus has more power to confront that which he has never faced up to before.

Instead of the energy of Love-Wisdom bringing him peace and security we are told that when the fifth seal opens, he sees, “under the altar the souls of them that were slain for the word of God, and for the testimony which they held.”

When the fifth seal is open the higher mind, tempered by love-wisdom, realizes that those who have gone before him on the path have sacrificed the lower self and have either given their lives through dedication to service or even to the physical loss of life if necessary. He now sees that to open the fifth seal he must also sacrifice his lower desires and willingly give himself as a sacrifice under the alter of God. His life will be changed forever and there will be no turning back. The Word of the Living God within him slays the dominance of the beast that has served him so long.

The next verse reads:

“And they (the sacrificed lives) cried with a loud voice, saying, How long, O Lord, holy and true, dost thou not judge and avenge our blood on them that dwell on the earth?”

Even though the disciple has reached a point where the higher nature dominates by placing the lower nature under the alter of God, or spirit dominating matter, the lower nature is still alive and well. Even the most spiritual of men and women feel the powerful pull of lower desire.

Eventually, even the saint hears the call of the lower self saying with a “loud voice” something like this: “Your following God has forced me into submission and sacrificed the life I once had. Let Spirit yield to me one more time and I will make things right and bring pleasure to the body and mind in my own way.”

After the lower nature loudly speaks the voice of the God within, who is now in control, responds first by giving the lower parts of ourselves “white robes.”

The white robes symbolize harmlessness. The lower nature is reminded that has long as it is under the alter of God it can do no harm and will be unable to distract the disciple from the path.

Finally, the voice of God says the lower nature “should rest yet for a little season, until their fellowservants also and their brethren, that should be killed as they were, should be fulfilled.”

During the transition from the control of the lower nature to the higher is no time to give in to the lower demands of vengeance and self-interest. Instead, the lower is commanded to “rest.” The lower is recognized as still existing and having needs, but now is the time for it to rest and see what the inner God can do.

They are to rest “until their fellowservants also and their brethren, that should be killed as they were, should be fulfilled.”

Not only are carnal desires sacrificed (killed) to the God within but there are brethren or related desires that may seem altruistic and of a higher nature that also have to be sacrificed. As the disciple opens the higher seals, he finds flaws in his higher and spiritual desires that must also be killed and replaced as be moves along the path.

When all wrong desire, both spiritual and carnal, are killed and placed under the alter of God then all the seals will be open and even the lower nature will see the wisdom of being subjected to the higher. At this point the lower will cease to rest and be able to express itself again, but because the higher and lower have merged, the lower no longer seeks for vengeance and carnal desire, but to be a mouthpiece and servant of the whole body of God.

Question: If an individual opens a seal in one lifetime does it automatically remain open in the next…or does one need to open the “lower” 4 seals during past incarnations and before continuing to work on the 5th he must remember and assimilate all that has been learned to be able to move in the spirit and thus work to open the 5th and so on??

Does one have to open all 7 seals anew in the same lifetime to achieve Jesus’s perfection or ascension? Is their carry over?

JJ: In each life must demonstrate mastery of all we have learned in past lives that we will need in the current one. It’s a little like taking a refresher course and usually not nearly as painful as the original lesson.

When the adversary tempted Jesus in the wilderness he was being tempted with material he had already mastered, but the experience merely served to reinforce that which he has already learned.

Many of us have opened some of the seals, but there will come a life where each of us will follow in the footsteps of the Master and open them all in one lifetime. When this time comes then the four beasts, the 24 elders and millions of angels within will rejoice and sing praises to heaven and earth.

The inner joy will be beyond description.

In the attitude of silence the soul finds the path in a clearer light, and what is elusive and deceptive resolves itself into crystal clearness. Our life is a long and arduous quest after Truth. Mahatma Gandhi (1869 – 1948)