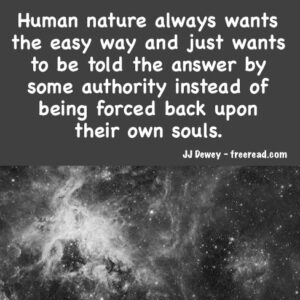 The next text to examine is:

“And I beheld when he had opened the sixth seal, and, lo, there was a great earthquake; and the sun became black as sackcloth of hair, and the moon became as blood; And the stars of heaven fell unto the earth, even as a fig tree casteth her untimely figs, when she is shaken of a mighty wind. And the heaven departed as a scroll when it is rolled together; and every mountain and island were moved out of their places.” Rev 6:12-14

At the sixth seal the ajna center is open and active. This is the center between the eyebrows often called the third eye. This correlates to the point in the Spiritual Triad called Buddhi and is related to the intuition. It is at this point that the disciple becomes a true Seer and sees into the world of ideas and begins to understand the principle of direct knowing, or the Oneness Principle.

As the disciple sees directly into the world of knowing, or the understanding of principles he bypasses the power of the beast or the authorities of the world. At this moment there is “a great earthquake.”

The earthquake occurs on two fronts.

(1) As the disciple receives personal revelation the earth is pulled out from under his feet and his old belief system crumbles until it is completely destroyed. After the quake he has to build anew.

(2) All those around him are also shaken. Friends, family, teachers and associates quake before him as he rejects and old ways and beliefs and teaches the new.

“and the sun became black as sackcloth of hair.”

The earth represents the foundation of his belief system and the Sun here was the light that guided him in the past. As the disciple tunes into the Oneness Principle the truth he finds is often completely upside down from that which he previously believed. That which was a light (sun) to him in the past is now darkness, black as sackcloth, and has no further light to offer him.

“and the moon became as blood.”

The moon symbolizes his past emotional support, his enjoyments and his possessions. These were a reflection of the light that guided him in the past. Now that light has failed him, he no longer sees a gentile, soft comforting light reflected by the moon. Blood here symbolizes the life principle expressed as anger. The disciple no longer has comforting emotional support but encounters anger at every turn because of his new vision. Friends and family feel betrayed because he is no longer one of them, his past enjoyments lose their luster and he will often lose all or a good portion of his possessions.

“And the stars of heaven fell unto the earth, even as a fig tree casteth her untimely figs, when she is shaken of a mighty wind.”

The earth, the moon and the sun all move, but the stars are fixed in their position and never seem to move out of their course. The stars symbolize those things in the disciple’s belief system that he thought were extremely secure and could be depended on 100%. Now the disciple has penetrated the Buddhic world of knowing even these secure stars seem to be falling to the ground, and not just one or two, but as figs falling from a tree in a wind.

The disciple’s view of God, Christ, prophets, the universe, creation all fall and he discovers that before his eyes were opened he really knew nothing. He starts anew and discovers a new heaven and new earth, one closer to reality.

“And the heaven departed as a scroll when it is rolled together; and every mountain and island were moved out of their places.”

The stars fall and as they are removed from their place it appears that heaven is rolled up. A new heaven is revealed. This is new knowledge, a direct knowing through the Oneness Principle. Mountains and Islands  symbolize kingdoms, governments, belief systems which separate us. As the disciple moves into the understanding of the Oneness Principle all separation is moved out of its place and replaced by a knowing of oneness of all life and the brotherhood of man.

“And the kings of the earth, and the great men, and the rich men, and the chief captains, and the mighty men, and every bondman, and every free man, hid themselves in the dens and in the rocks of the mountains; And said to the mountains and rocks, Fall on us, and hide us from the face of him that sitteth on the throne, and from the wrath of the Lamb: For the great day of his wrath is come; and who shall be able to stand?” Rev 6:15-17

Notice who wanted to hide themselves. The scripture starts out by naming the important people of the earth, the kings, great men, rich men, chief captains and mighty men.

When an inspired idea or thought is revealed from the opening of the sixth seal the powerful are the ones who are most alarmed when it is introduced to the public consciousness.

But then the verse throws in every man who is bond and free which would include the general population. When the leaders of the people become alarmed then the rank and file soon follow suit. Those affected would be the vast majority, and they are afraid, but of what?

What have they witnessed? They have seen one of their own reject the orthodox way of things and have seen his belief system completely altered and replaced by one that is blasphemous and sacrilegious. If accepted it will shatter the foundations of their own beliefs.

An example in history would be when Galileo invented the telescope and discovered that the earth is not the center of the universe. All the great and mighty men became alarmed and soon the rank and file joined in.

These fearful ones are not limited to the religious people but those in all walks of life are affected. For instance, when Velikosky presented his views of worlds in collision almost every scientist who examined his work became alarmed and fought against him being able to publish his work.

And today, if a scientist presents an alternative to the orthodox Big Bang theory or most anything Einstein taught, he is attacked.

The scripture says these men are hiding. What are they hiding from? They are not hiding from the disciple but from the word of truth, or the revelation through the Christ (soul) energies he represents.

They attacked Galileo, but they hid from the truth he revealed. It terrified them to think it could ever be accepted.

Where did they hide?

In the dens (caves) and under the rocks of the mountains.

Those presented with a truth so powerful that it causes their fixed stars (beliefs) to fall will hide from facing that truth by retreating into a state of consciousness (caves) that does not accept new truth. They will then reinforce this “protection” from truth by calling on the authority of their church, government or organization to shield or cushion them from the revelation. They will hide, or identify with the system to delay facing the truth.

Then what happens? They try to hide, but the truth just does not go away. The idea that the earth is not the center of the universe continues to spread and keeps coming back to haunt those who hide. So, do they come out of hiding and examine the facts and see where they lead? Not hardly. Instead, they cry:

“And said to the mountains and rocks, Fall on us, and hide us from the face of him that sitteth on the throne, and from the wrath of the Lamb:”

They appeal to the authorities: “Protect us from this blasphemer. Lock him up, burn him at the stake, banish all those bearing the truth. Save us from having to face it.”

What wrath are they afraid of?

If the common people see their leaders were wrong and those, they persecuted are correct, then the followers will be angry with such leaders for misleading them.

But then time passes and the world sees that the earth does indeed circle around the sun and there are other planets even larger than the earth. The day of reckoning finally comes and the truth must be faced. The powerful then exclaim:

“For the great day of his wrath is come; and who shall be able to stand?”

Who shall be able to stand against a truth revealed and seen in the light of Christ or the soul?

The income tax has made more liars out of the American people than golf has. Even when you make a tax form out on the level, you don’t know when it’s through if you are a crook or a martyr. Will Rogers (1879 – 1935)