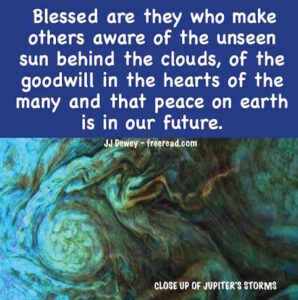 The Importance of Watching

Question: What will it take to recognize the Christ when he reappears. Will having intuition and soul contact be enough?

Having a higher consciousness will certainly be a plus in recognizing the Christ when he reappears, but this alone will not be enough to ensure success.

There is one more ingredient that is essential for people of all states of progression. The key was given by Jesus in the Scriptures.

“Watch, therefore: for ye know not what hour your lord doeth come.” Matt 24:42

“Watch” comes from the Greek GREGORENO which means to “be awake” or “to be aware.” The Lord’s servants were often called “watchmen.” Why?

Because a true servant does more than reach the higher planes. Instead, he will watch for the signs of the times, for ways to help his brethren and, most of all, the words of the Spirit through the still small voice so he can recognize the voice and presence of his master.

It is interesting that many of the most intelligent can be “caught unawares” to the point where they will miss many great spiritual opportunities and possibly the presence of Christ himself.

Forget where you are on the totem pole and apply this one principle of watching. If you do this one thing, to watch and be aware, or, in other words, apply the principle of focused attention to the presence of Christ then you have a good chance of recognizing him when he manifests.

Question: Can you elaborate on your idea that all things can be expressed in words?

Yes, I stand by my statement that all things which are true can be expressed in words. In fact, creation begins in the formless worlds by the distillation of the ideas and energy into form. When creation descends into form it does so through the power of a word. The vibrating creation is a word which is an expression of the invisible formless planes.

Now putting an explanation of the higher planes in regular language words is more difficult than merely looking at something and describing it. The reason is that almost all words we speak circle around a physical form of some kind.

Even so, I have done a lot of thinking about it and have put into words teachings of the higher planes. There is a drawback, however as words, as we understand them, (somewhat different from the soul) are symbols representing ideas and lose some of their purity when translated by the lower mind.

In the last section posted from the Reappearance DK makes the point that it seems easy to raise large sums of money for orthodox organizations such as the Red Cross, hospital, educational institutions etc, but very difficult to raise money for more enlightened forward-thinking ideas.

This principle also applies to religion. The standard religions raise large sums of money, but anyone presenting advanced spiritual ideas has a very difficult time, many of them living in hand-to-mouth conditions.

Question: Why is this, and what can be done about it?

We’ve received some good feedback on this, too much material to comment on it all.

I particularly thought these comments hit the mark:

“In the end, I think this all boils down to the principle of freedom. We have freedom now but what kind of freedom? A corrupted freedom. The counterfeit always guarantees the true. The Beast puts it own slant on freedom at tries to redirected towards its own purposes. The principle of corruption is the principle of directed purpose in reverse where true freedom is substituted by fear?

“The Beast IMO, is afraid to let go of control over people and money. It is funny that it says on the U.S. currency in God we Trust. People Trust the authorities because nothing “bad” is overtly happening and are therefore “proven” authorities. People simply do not see the benefits of leaving the old system behind.”

JJ: This is an interesting twist – that people are reluctant to give to advanced or forward-thinking ideas because of the pull of the Beast, or the demand to follow the outer authority rather than the inner.

People feel comfortable giving to that which is approved by the authorities in their life whether they be religious, political educational etc. But if something new surfaces which is condemned by outward authority people are hesitant to give, not because of lack of money, but because of lack of approval.

Among those who are presenting what they believe to be forward thinking ideas are two categories.

(1) Those with bad ideas that may sound good but are not workable in the near future.

Most of the promoters in this category live hand-to-mouth, ever preaching and never getting much support. Once in a while, a real promoter will come along with a bad idea and sell it well so he has money for a time, but then loses it all in the end.

Most of those in this category are the impractical dreamers who find it more exciting to dream and plan than to do the nuts and bolts work necessary to get the job done.

(2) Those with good practical ideas, but that have not been proved workable in the real world.

A good idea which is workable, but not yet demonstrated is not yet under the control of the Beast. Why?

Because the Beast can only uses its powerful outer authority on that which is already manifest. The unmanifested puzzles the Beast and he knows not what to do with it except fight against it.

True seekers must discern between good and bad ideas by registering the principles behind them with their own souls. If he finds a good idea or teaching which will benefit the world then he is doing the world a service by throwing his support behind it.

Another major problem with raising funds for true spiritual ideas is this. Many of those who are sensitive enough to recognize the need have not felt the need themselves to acquire more money than is needed to pay the bills. Many seekers sacrifice money for free time and the freedom to place their attention on spiritual endeavors. Other seekers have their own ideas they are working with and will wish other spiritual ideas Godspeed, but give no money.

The final problem boils down to this. Many of those sensitive enough to recognize avant-garde thinking have few financial resources to help it materialize.

Part of the reason for this is the carry-over of the Piscean age idea of sacrifice in its negative ramifications. In the dawning age of Aquarius, service is the keynote and to serve and be recompensed for that service is the key to raising funds in the new age.

Another thing that causes problems for spiritual workers is the fact of taking money at all. Some quote Jesus who said “freely I have received and freely I give.” Some of these refuse to take any money for their service.

Others quote Paul who said “the laborer is worthy of his hire” and say it is as legitimate to charge money for spiritual work as for any other kind.

Question: What is the Middle Way of truth here? Does the Spiritual worker have a right to charge for his service? Are there times when he should not charge? What is the principle that must be followed?

“A long time ago,
the universe was made of ice.
Then one day
the ice began to melt,
and a midst rose into the sky.
Out of the midst
came a giant made of frost,
and the earth and the heavens
were made from his body.
That is how the world began,
and that is how the world will end,
not by fire
but by ice.
The seas will freeze
and winters will never end.”
Ancient Scandinavian Legend