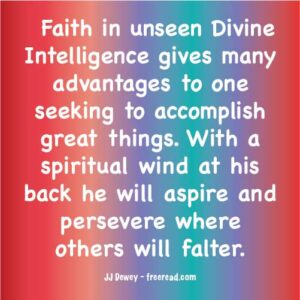 DK makes an odd comment at the beginning of chapter six in the Reappearance. He states:

“The fact still remains that human beings everywhere are searching for spiritual release and truth, and that the truly religious spirit is more fundamentally alive than at any previous time. This is especially true of those countries which have suffered the most in the late world war (1914-1945). Countries, such as the United States and the neutral countries show, as yet, no sign of any real spiritual revival.” Reappearance of the Christ, Page 137

One of the few things that DK says that does not register correctly with me is his negative remarks against the United States that seem to have little foundation.

Here he is saying that the nations most effected by the war, which would be England, Russia, Europe and Japan “are searching for spiritual release and truth, and that the truly religious spirit is more fundamentally alive than at any previous time.” This he says does not apply to the United States.

I do not mind a realistic criticism of my country and can offer a lot myself, but I see little evidence that DK speaks correctly here.

Let us examine these countries that were supposed to have a spiritual revival.

(1) Russia. After DK wrote this Russia spent over forty years living in tyranny with little or no religious or spiritual freedom. I do not see much evidence of a spiritual revival that went on there. I believe one will come in the future, but there didn’t seem to be much going on in the last century.

(2) England. I have some personal experience here. I spent two years teaching the English people (from 1964-66) and personally had discussions with about 5000 of them on an individual basis. I loved the people there and still have fond feelings for them, but it did seem to me that very few were searching for any spiritual center. A smaller percentage seemed to want to talk about spiritual values than people in the United States. They seemed more bound to their church doctrines than they do here, even though fewer go to church.

One thing that surprised me about them was how superstitious they are for such a civilized country, much more so than the U.S. population.

(3) Europe. I have talked to quite a few who have traveled and taught in Europe and the consensus seems to be that England is about twice as enlightened or open minded as most European Countries.

As of 2005 only about 70% of Western Europe believe in God as a creator while 87% of those in the U.S. do. 96% of U.S. residents have some type of belief in God which is the highest in the world. While this is not an ironclad criteria, a belief in a higher power is essential to any spiritual revival of which DK speaks.

Over half of U.S. residents believe in a life after death whereas in Europe the percentage is about half this much. Residents of the U.S. are twice as likely to believe in the possibility of miracles as England or Europe.

(4) Japan. Only about half of the Japanese believe in God. I do not have much knowledge of the Japanese people, but have not heard much about any spiritual revival or spiritual teachings for the world coming from that country.

Another interesting point is that the two spiritual works that are acknowledged by DK as coming from the Masters originated in the United States – Theosophy and the work of Alice A. Bailey. Lucis Trust maintains its headquarters today in New York City. If the U.S. is so backward spiritually, it makes little sense for the Masters to use it as a base to launch spiritual teachings.

I see the problem from a different view from DK. I think there is a lack of spiritual aspiration all over the world, including the United States, but of the little that does exist it appears the U.S. is as great a source of light as any other nation.

On the negative side we may be more attached to the material side than many other nations, but I see the main reason for this is that we have more in material goods. The more treasure you have, the more value you put on it. Other nations are also attached to what they have.

One definite spiritual benefit of the war for all involved is that it did case many people to reflect on what is really important in life.

It would be interesting to have DK explain himself on this issue when he speaks again.

In response to my comments, Sharón tells us that she has traveled in Russia and feels that true seekers are on the increase there.

I might add that DK made a prediction that a great new religion would come out of Russia which would imply a great increase in spiritual intensity sometime in the near future.

A reader comments: “You used the standards of revival in this country as: belief in God, belief in the afterlife, belief in miracles.

“There is nothing spiritual about mere belief which does not lead to knowledge and demonstrated spirituality which plays out in the real world.”

Even though belief is not the be-all end-all, it is an important first step. Who is there without a belief in a Higher Power who has spearheaded a spiritual revolution or innovative teaching that has helped humanity? Who is there that has not believed in miracles who has done the miraculous? Or who is there that does not believe in life after death who seeks to live to experience a joyous future many years hence?

Even though belief alone does not make a spiritual person it is one of the ingredients. There is far too much doubt in the world and too many are expecting negative things to happen to humanity as well as themselves, rather than the good.

Most of the comment made in my last response on the Reappearance were pretty self-explanatory. There was one more statement of interest I will emphasize however:

“There is, however, no point in attacking Christianity. Christianity cannot be attacked; it is an expression-in essence, if not yet entirely factual-of the love of God, immanent in His created universe. Churchianity has, however, laid itself wide open to attack, and the mass of thinking people are aware of this; unfortunately, these thinking people are still a small minority. Nevertheless, it is this thinking minority which (when it is a majority and it is today a rapidly growing one) will spell the doom of the churches and endorse the spread of the true teaching of the Christ.” Page 140

In other words, he is saying that as people in the churches learn to think and use their logic they will reject Christianity as it is and begin to recognize the true teachings of Christ, or true Christianity.

Question: As the people in the churches begin to think for themselves and use logic and reasoning which teachings will they reject?

Which ones will they continue to embrace?

“Opportunity is missed by most people because it is dressed in overalls and looks like work.” Thomas A. Edison (1847 – 1931)