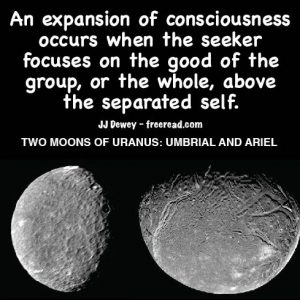 Question: All in all you mention the colour gold twice, am I to assume that there is a different shade of gold between the Heart and Head chakra? How does one differentiate between the two (apart from location naturally!).

JJ: It is basically the same gold. The reason for this is the heart center has its reflection in the head center. DK calls it the “heart center in the head.”

Concerning this he states: “Thereby you are trained to use the heart and to work with and through heart centres wherever they are found in manifestation. I have here given you a most valuable hint and item of information. In this connection it is valuable to bear in mind that the first meditation has relation to the heart centre in the spine, and that this second meditation is only effective when the disciple can work with the heart centre in the head. As soon as this becomes possible, the disciple realises three things:

Question: I am also curious about the change in Chakra colours that occurs over time. What exactly did you mean by that? Is it a very slight change or a very drastic one?

JJ: The petals of the chakras have differing shades of color and as they unfold the color scheme of the whole is affected. This change is very gradual.

Question: When people get an Aura photo taken, which body is being captured? Is the Aura an integrated mixture of all bodies? Do the Chakra’s change the colour of your Aura?

JJ: I haven’t seen any process that actually photographs the aura yet. I have seen several that use a methodology to guess at the colors and project a guessed image of what the aura is supposed to be.

Kirilian Photography does not photograph the aura but captures an image of the energy radiated from the etheric body.

As the chakras unfold the color of the aura does change.

Reader Comment: If memory serves me correctly he talked about the world universe) of seven becoming one which becomes eight and so forth. What happens then know one knows.

When I read this it scared the living daylights out of me *because* no one knows what is going to happen.

JJ: Beyond a certain point in the future no one knows what will happen, not even the Masters or God Itself. If they did, there would be no future.

No future? Why would that be?

Because if the future were perfectly known no one would want to go there and assist in its creation.

Think on this. If you knew in advance who would win each football or basketball game, would you even want to watch? Would the players want to play?

No. They would not. Not knowing is what makes the game exciting to both the participants and the watchers.

Even so, it is with creation. If the Lives of God knew exactly in advance how everything would turn out (as almost all teach) then creation would cease for the process would not attract our attention.

Is it scary to not know?

Today my favorite football team (Boise State University) played its first game of the season. They have had a couple great seasons and have caught some national attention. The question now is can they do it again under new circumstances with new players? I felt kind of nervous as I listened to the beginning of the game. I also knew the coach and the players were nervous. The opponent had a new coach and no one knew for sure what we were up against.

Everyone involved had both fear and faith, but diehard fans and players would have it no other way. The tension made it exciting. Even better we wound up winning 65-7. Even so, games are even more fun when they are close or go into overtime. Then, once in a while, there is that real exciting moment when the game is won by a seat-of-the-pants play that no one could have predicted.

I do not know of anyone else ever teaching that God does not know everything that happens in this world, but now that the idea is out there those who think on it will begin to realize that it is true.

This is also the reason that no prophet, teacher or guru can accurately predict the future in detail. Patterns and cycles can be seen but none see it all. Even about 40% of DK’s predictions did not come true as specified. 60% accuracy is about as good as one can get except in dealing with general cycles which repeat with changes.

Reader: Then I tried looking to the past and then JJ talks about animal lives that make up our body like plants and lions and such.

So I thought that we were going to be swallowed up by a future life (being, creature) that no one knows what is because it is not here yet.

JJ: Swallowed up is the wrong term. When lives merge, identity is never lost.

When you move to a new city and blend in are you swallowed up?

You may like it better or worse than the last place you lived, but few would consider themselves “swallowed up.”

Even so, when we merge and create a higher molecular life of 24 individuals, participants will not consider themselves as swallowed up like a Borg, but joined to create a greater shared consciousness while retaining their own.

Hydrogen and oxygen merge to create water yet retain their identity and can separate at any time and no longer be water, but they remain as water because of the advantages of being a part of something greater than the unit.

Reader: And we would be at its mercy. Like the lion within seeks to know it’s *owner* we would have to do the same one day.

JJ: If you move to a new city are you at the mercy of the community?

No. If you do not like it, you can move to the mountains and live by yourself. All but a few however, want to live in a community because of the advantages.

Lives merge to create greater lives because of the advantages, not because they are captured and held like a Borg.

When we move to a new community, however, there are certain rules that we are expected to follow such as speed limits, parking restrictions – not intruding on the neighbor’s property etc.

When we merge with a greater life a certain amount of cooperation will be necessary, but we will all eventually choose to cooperate because of the advantages.

Reader: Like ten thousand humans to make one future being. And if we get a *bad* owner who knows how long we are going to be stuck. And what if that being takes the dark road?

JJ: You always have free will and if you find yourself in an undesirable situation you can always find a way out.

When you are a part of any greater life you will bear some responsibility if it does choose incorrectly. However, the intelligence of a combined life is much greater than the single one so there will be fewer mistakes.

Reader: There is another angle to this and it is fear. Fear of losing control. That’s why many of us, provided I’m not assuming to much, are afraid of the Oneness principle. That we would become slaves to the authority of the soul.

Let us look at the example of a city again. We move to a community to give us greater power not less. We can have more friends, more money, more culture, and more entertainment than if we lived alone in the mountains. This is why almost all people of their own free will live in a community of some kind rather than by themselves in isolation.

There is some conformity necessary, but the advantages far outweigh the disadvantages.

When our time comes to merge with a greater life, we will do so of our own free will because of the same reason. The advantages will outweigh the disadvantages.

Can a slug see the advantages of human life and human communities?

No. Neither can we comprehend the joy that awaits us as we move into the Great Unknown.

Reader: Dare I say that that fear is based on illusion?

JJ: Fear is based on the unknown, but so is faith. When faced with the unknown, a noble soul will have faith in himself, faith in his brothers and faith in God that good will prevail through the power of intelligent choice.