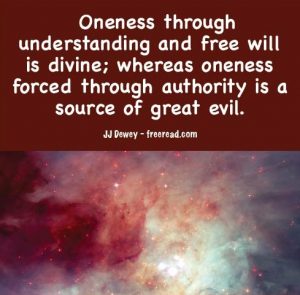 Question: Why have your books received praise from some teachers and channels who are obviously in error, or maybe on the dark side? Is this a bad sign?

JJ: First, let me say that most direct voice channelers are in contact with an astral entity which is not directly connected with the Dark Brotherhood. These astral entities often use a medium as a means to enhance their own glamours as they are often viewed as infallible authorities by their believers. Many of these entities are no more agents of the Dark Brothers than are our movie stars. Both brotherhoods use those with whom they may find a response and many of these are not aware they are being influenced.

As I have said before, the main difference between the two is that the Dark Brothers are willing to infringe on free will when the opportunity permits whereas the Brotherhood of Light do not.

I do not make any judgment as to whether any particular channeler is influenced by the Dark Brotherhood. Some teachings I may agree with and others I do not.

But the fact that a medium recommended my books not mean that we are of the same kingdom, order or brotherhood. Most of them recommend the teachings of Jesus, but that doesn’t mean that Jesus would embrace them all if he were here.

Some followers have even killed in support of Jesus, but that doesn’t mean they belong in the same kingdom as the Master.

If one observes the events of the times, he can see the workings of two united kingdoms who are working with opposing, but unified goals. Those who are pure in heart are often unconscious agents of the Brotherhood of Light and those who are selfish and controlling are used as needed by the Dark Brotherhood.

I would hope my teachings are clear enough, encourage free will and touch the soul to the extent that the focus on light and love is obvious. The outer mind can be fooled, but the inner spirit cannot. But the inner spiritual fire must be contacted before one can know for sure.

Because in live discussion strong emotions often surface and people will speak impulsively, sometimes saying angry or thoughtless things they do not mean. This then sets others off doing the same thing causing anger to escalate.

It also seemed logical to me that when something insulting was stated in a web discussion that less offense would be taken.

The same reason. In a live discussion we react immediately to the insult and sometimes have a misunderstanding about it. Because of reaction without time to think we have wrong interpretation and feelings sometimes get out of hand.

It is interesting that reality turns out to be somewhat different than the projection of it.

First, it seems that the extra time we have on the web to absorb, think and measure is not put to use by many. Instead, many react just as strongly after having time to think as they would in person. In fact some react more strongly. Why? Because (for some) the extra time to think is extra time to foment negative emotions rather than to add extra reasoning.

This fomenting principle was what I left out of the equation when I first compared web discussion to live discussion. Because of this, emotions probably get just as out of hand on the web as they do in person. About the only advantage of the web is that it is impossible to come to blows because of the distance. Also, a few mentally polarized people do actually take the extra time involved in writing to project themselves in a more reasonable manner than in a live discussion.

That said, this illustrates that an original idea as formulated by the mind usually either has flaws in its construction or ideas about its implementation.

An idea itself may represent a flawless ideal, but by the time it is expressed in the world of form some of the ideal is lost. Then as it is implemented many errors are demonstrated. It is only after many attempts at trial and error, and then learning from mistakes, that relative perfection is finally obtained.

Let us take the divine idea of brotherhood and equality for human beings.

This is an ideal that will eventually be achieved, but our attempts at it so far have been a disaster. For example, totalitarian communist regimes have been set up to implement this idea by using wrong methods. Humanity is examining the results of such error and is preparing for new steps in this direction that will be less harmful. It may take a million years or more, but eventually the ideal will be achieved where the individual and the whole will benefit through equality to the maximum degree.

When I came to this group as a teacher I did so with few preconceived notions. There were a number of situations for which you cannot plan so my plans were simple. To teach the highest I know in the hope that lights will gather and participate.

Did I have ideas as to how to handle discord?

I didn’t even think about it, feeling it is best to deal with such as it comes along.

Did I have ideas as to how to deal with opposing philosophies?

I didn’t even think about it, feeling it is best to deal with such as it comes along.

Instead of planning for specifics I tend to deal with general principles. My strategy as a teacher is basically this.

(3) Answer all pertinent questions to the best of my ability.

(4) Be as tolerant as possible to opposing ideas.

(5) Treat members kindly unless they are openly hostile. In this case a judgment must be made.

(6) Reexamine things periodically as the group unfolds and make adjustments.

(7) Seek to make the list a gathering place for lights.

From my point of view, nothing has changed from the beginning. I still try to stimulate soul contact as a prime objective along with the other items. People come and go, but periodical conflict and highs and lows continue and will continue.

This group has more conflict and may feel less safe than some others because more ideas are presented here and we try to give maximum tolerance toward expression, even disagreeable expression.

On the other hand, there are many groups with three times the membership of this one that has only 10% of the number of postings. Such groups have little conflict for there is little food for thought to even provide fodder for conflict.

I would rather have a small lively group than a large one weighed down with inertia.

I do not see success or failure with this group measured through the number of members. We do not yet have enough members to make much impact on the world. The main benefit so far has been the stimulation of ideas, concepts and teachings that will have an impact on the world and will survive all of us.

When the members of this little group have all moved on to higher spheres, these writings will remain and be the fodder for the sprouting of much good in the world.

For those who enjoy this group and seek to continue on it let me offer this advice. Accept the fact that neither the members nor the group is perfect. There will be times when there will be differences of opinion, presentation of controversial teachings, rudeness and conflict between members. Things will arise that we haven’t planned for that will be dealt with at the time. After they are dealt with there will be some improvement, but not perfection.

If a member cannot accept this basic statement, then he will be alarmed any time there is a new conflict or problem. If he accepts the statement then he will roll with the punches (truism), remain unruffled and concentrate on learning and sharing rather than that which distracts from the goal.