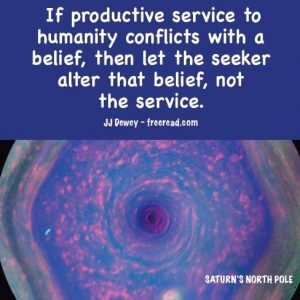 The writings of Alice A. Bailey are just plain demonic and evil.

This is kind of a silly and baseless accusation to respond to, but after exploring several Anti-Bailey web sites and seeing something like this surface again and again, I suppose we should include it in our response.

We have already covered some areas which critics charge as being evil and have shown such accusations to have no foundation. Now we shall cover a few others.

Alice A. Bailey does not present the exact same idea of Christ and salvation as do the fundamentalist religions.

The truth is that there are many sincere Christian religions who present ideas of Christ and salvation which differ from, the ultra literal religionists. These same people who condemn Alice A. Bailey for being evil for this reason also condemn the Mormons, the Seventh-Day Adventists, the Bahai’s and other minority religions. In addition to this some even condemn the Methodists, Episcopalians and other large religions, not to mention that many see the Catholic Church as the Beast straight out of hell.

Again, I say that it is easy to mindlessly condemn. What is difficult is to present your own version of truth in a manner that will reach the hearts and minds of the children of men.

Perhaps the question that should be asked is this: Did Jesus condemn anyone who had mistaken notions concerning him?

If he would have then all his twelve apostles would have wound up in hell because none of them correctly comprehended what he taught them while he was with them.

There is nowhere in the scriptures where a believer in Christ is condemned for merely having a mistaken belief.

“And John answered and said, Master, we saw one casting out devils in thy name; and we forbad him, because he followeth not with us. And Jesus said unto him, Forbid him not: for he that is not against us is for us.” Luke 9:49-50

This man used the name of Christ, yet did not join with Jesus and his group. Perhaps there were some doctrines he did not agree with. Did Jesus condemn him? No. The key principle that Jesus gave here was that those who are on his side will not oppose him. They may go off on a tangent and error in the teaching of their doctrines, but the major test as to whether a person is truly on the side of Christ is whether they do not oppose and attempt to stop Him.

In other words, this man did not make a first aggression mentally, emotionally or physically toward Jesus and his group – he was not an “accuser of the brethren,” (Rev 12:10) a characteristic of one in league with the true adversary of light.

Bailey received her revelations by automatic handwriting from demon spirits.

Those making this accusation have not even taken the time to find the truth which is readily available.

First, she did not use automatic handwriting. She received the information through the science of impression, or mental; telepathy, in a fully conscious state and wrote it down just as you or I would write down a letter. There was no automatic moving of the hand, writing information of which she was not consciously aware.

She did not receive her information from a spirit guide. Djwhal Khul lives in a physical body in Tibet and she sometimes received physical mail from him and met his teacher, the Master Koot Hoomi in the flesh.

Blue is a color mentioned frequently by Alice A. Bailey and even all her books are blue. This is because blue is a symbol of evil.

Don’t laugh, a number of sites are including this silly accusation. This is about as silly as saying the note of Middle C is an evil note and we should not play it.

The color blue is a symbol of mental activity. Those with blue in their aura are usually quite intelligent and this is a good thing. All the colors and all the notes in their purity are good and represent true correspondences in their pure state.

Bailey teaches that humanity has to take responsibility for their state of affairs and actively work toward world peace and the prevention of a war that could take us back to the stone age.

Unfortunately the accusers see this as evil because they think that we are just supposed to sit back and do nothing and wait for Jesus to show up, destroy the wicked and force peace upon humanity.

Who are the evil ones? Those who shirk responsibility as the laggard in the parable of the talents, or the ones who do all in their power to assist the work of God in manifesting peace in earth, good will toward mankind.

Many other teachings and activities initiated by the Bailey writings are charged with being evil such as:

World Good Will – an organization to promote the idea introduced by the Angels at the birth of Christ. To be against the spreading of goodwill is strange indeed.

Many Bailey students meditate in Triangular relationships for the increase of love and light on the earth. This is really sinister now isn’t it?

Bailey teaches that mankind evolves spiritually, mentally and physically. This is seen as humanistic and evil for some reason.

We could go on here, but the reader should get the general idea from what has been presented.

The accusers see the devil under every rock, whereas the Bailey writings stress seeing the hand of God in every rock, flower and human.

Which direction is the nobler of the two?