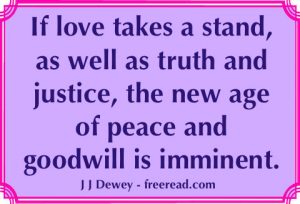 Alice A. Bailey originated the phrase “New World Order.” This New World Order is an evil scheme to enslave the human spirit, to unify the world governments and religion by force under a beastly totalitarian system where individual political and religious freedom will be no more.

Actually, this first statement is roughly correct. Whereas, I am sure that Alice A. Bailey was not the very first to use this term, it is true that she did write about it and popularize it.

In fact, when she talked about the term she mentioned that totalitarian states often used a similar term and that such ideologies which restrict freedom and the human spirit are not to be confused with the coming changes which would indeed create a “New World.”

In order to understand what she meant by a New World Order it would be helpful to examine what she thought was the “Old World Order” which it would replace. To fully understand this we must realize that she introduced the term in early 1940s shortly after Europe entered World War II.

The Old World Order that she wanted to see replaced with new and better governments were the ideologies of the Nazis and Japanese that lead these and many nations in the past to seek world dominion by conquest and force.

The New World Order that she talked about was not something future to us at this time (written 2001 AD), but was a new world that would be created after the defeat of the Axis powers. The New World Order would replace the totalitarian governments of Germany, Japan and Italy with free governments which would join forces with other free nations in order to hold in check the forces of totalitarianism.

This New World Order which was talked about by Bailey is here today. It is not perfect and she states that we will yet evolve to new and better orders, but if you compare the world today to the beginning of World War II in 1940 no one can argue that we do indeed have a new and better world, however flawed. If you were to take an English infantryman from 1940 and transport him to the current year he would jump for joy that Hitler was defeated and that the world is in as good a shape as it is. As he would look upon our communications systems, satellites, television, space travel, the internet, relative peace etc, he would indeed agree that this world in our present is a new World Order – compared to 1940.

“It is necessary, therefore, to speak with directness, to indicate the inherent dangers of the present situation (1940), to present its amazing opportunity to bring about needed changes, and to point out the lines of demarcation between the right and the wrong ways of living, between a vision of the new world order and the retrograde plans of the so-called “new order” with which the totalitarian powers seek to bewilder humanity.” Externalization of the Hierarchy, Page 175

“On all sides the need for a new world order is being recognized. The totalitarian powers are talking of the “new order in Europe”; the idealists and thinkers are unfolding schemes and plans which vision entirely new conditions that will bring the old bad order to an end. There is a constant demand for the Allies to state their peace aims and indicate clearly what adjustments will be made after the war, because a vision of the future world policy will help humanity through the present crisis.” Externalization of the Hierarchy, Page 183

Here she makes clear that the New World Order will materialize after the war.

She makes five statements concerning the New World Order which is never quoted by her enemies:

(Capitalization added to the original)

“Humanity will then emerge into the light of freedom with a revealed beauty and a spiritual purpose, hitherto unknown.” Esoteric Astrology, Page 531

It is true that if some fringe and extreme movements had their way in implementing their version of a New World Order that we would merely have a return to the Old Bad Order. But Djwhal Khul’s New World Order as revealed through Bailey should not be associated at random with delusionary visions of quirky prophets.

If we let Bailey’s words stand by themselves without distortion, the light and a direction toward maximum freedom becomes obvious.