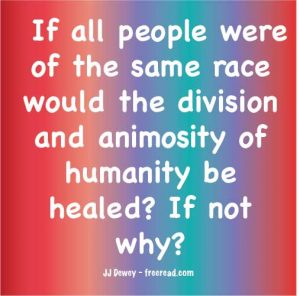 Alice A. Bailey is a racist and hates Jews, Blacks and other minorities. She and Djwhal Khul are seeking to eliminate inferior races and peoples and establish a Master Race as Hitler sought to do.

I had read through every word transmitted to Alice A. Bailey from Djwhal Khul before I came across this criticism and was somewhat surprised to see it. I had to do some serious reflection before I could even figure out why the impartial writings could generate such a criticism, especially since Djwhal Khul himself is a minority by U.S. standards – an oriental.

In addition to deliberate distortion, there are two reasons why the writings have generated this belief.

(1) Alice A. Bailey wrote most of the dialog over 70 years ago at a time when writers were able to call things as they saw them without watering down their teachings to satisfy the politically correct crowd.

(2) Djwhal Khul wrote about not only the positive aspects of almost every subject, person, race and country that he covered, but also made a critical analysis of all these categories. In this day and age a critical analysis of many subjects is not the politically correct thing to do, however accurate they may be. One disadvantage of this age we live in is that we have sacrificed truth for feel-goodism.

It is true that Djwhal Khul spoke of some of the negative aspects of the Jews and their ancient religion, but he also spoke of the positive aspects. No people are all positive or negative, so any critical analysis must involve both sides of an equation.

He said both positive and negative things about the occidental people, about the Asians, about the United States, about England, about Russia, about France, about the past about the present. He even criticized Gandhi, of all people, but when you look at what he said even here his criticism made sense.

No one is infallible, not even a Master, especially when writing of current events and their solutions, but many of the Bailey writings were ahead of her time.

Here are some statements about the Blacks, referred to as Negroes in that time period (1930’s and 40’s).

“They (The United States) are broadly tolerant and yet most intolerant of other nations; they are ready to tell other nations how to handle their problems but as yet evidence no ability to handle their own, as witness the treatment of the American Negroes and the withholding of equal freedom and opportunity from them.”

“The cry of the south that the Negro is not educationally fitted to vote is negated by the fact that he can and does vote in the northern states, in many cases as wisely as his white brother, and though his vote can often be purchased by electioneering politicians so also can that of the white voter; the cry that white women must be protected from the animal instincts of the Negroes means nothing, for they need equal protection from the animal instincts of the white man, and this statistics will adequately prove; the cry that paternalism is what the Negro needs and that only the southerner understands how to handle the Negro is disproved by the Negro himself who wants none of it; his repudiation of it demonstrates a sound sense of values and that he knows the distinction between paternalism (which keeps the Negro backward, uneducated and under obligation to the white) and the freedom which he wants to share with all men in the world.”

“Unless both races, the black and the white, approach the problem of their relationship with sanity, with long range vision, with patience and without hatred or fear, the cultural history of our planet will be retarded for many years. The hitherto unused and unorganized power of the countless millions of Africa is something that the white race should carefully consider. They can place the Negro peoples as rapidly as possible on an equality of opportunity, of constitutional and human rights, and help them to pass through the stage of adolescence in which they are now to be found to that full and useful maturity in which they will handle their own problems and territory. This process is now going forward and Africa will thus take its place (through its many possible national groups) in the great family of nations and bring into the world arena a race with an amazing contribution to make of spiritual assets, cultural values and creative possibilities.”

The innate endowment of the Negro is very rich in content. He is creative, artistic and capable of the highest mental development when taught and trained-as capable as is the white man; this has been proved again and again by the artists and the scientists who have come out of the Negro race and by the fact of their aspirations and their ambitions. The time has come when the white man must cease to look upon the Negro as a field labourer, a factory hand, a beast of burden, or one only capable of housework or unskilled labour and accord him the respect and the opportunity which is due him.” Problems of Humanity, Pages 110-111

Concerning the Jews, quite a bit positive and negative was written about them in the Bailey books. If anyone wants to give me a real quote from the Bailey material I would be happy to comment on it, but just let me review the general line of thinking that Djwhal Khul has toward race.

(1) He taught that each race had its own unique qualities peculiar to itself, but that all should have equal opportunity under the law.

(2) He taught that all races have appeared through a natural process of evolution, that all races nations and peoples should tolerate each other and learn to co-exist peacefully. He was strongly against the Nazi idea of forced control or any idea of destroying any people because of their race, belief or location. Many critics say otherwise, but they cannot back up their lies with any quotes.

Critics of Alice A. Bailey go out of their way to portray the writings as in harmony with the Nazis, but this is merely a deceptive ploy from a dark mind.

The Bailey writings do speak of the Aryan race, but says it uses “this term in its generic sense and not in its prostituted German connotation.” Rays and Initiations, Page 473

The writings further state that the identification of Aryan in relation to race today deals more with consciousness than physical appearance:

“When I use the word “race” I deal not with man-made or pseudo-scientific differentiations of nations and races or types. I deal with a state of consciousness which is the Aryan or mental consciousness or state of thinking; this finds its exponents and its “race members” in every nation, without any distinction or omissions. This I would have you carefully remember, for there is no new race in process of appearing, from the territorial angle; there is only a general distribution of those persons who have what have been called the sixth root race characteristics. This state of consciousness will find its expression in people as far apart racially as the Japanese and the American or the Negro and the Russian. It posits an ability to function with clarity upon the mental plane, to collate information, rightly to interpret and relate that information, and to create the needed thoughtforms or concepts for those interpretations.” Rays and Initiations, Pages 593-594

If one wants to destroy the good, the beautiful and the true these days you just mindlessly compare it to some Nazi belief and there will be some weak minds that will swallow it without checking out the facts for the Bailey writings consistently identify Hitler and the Nazis as on the side of evil.

(3) He taught that the next race in our coming evolution will have more to do with consciousness than with physical appearance. Humanity as a whole will refine their physical features. We have seen evidence of this just in the last generation for indeed there seems to be more beautiful people of every race emerging in this time period.

Even so, the main step in evolution will be the manifestation of a higher synthetic consciousness which will begin to manifest in the most highly spiritually evolved of each race and people. These spiritual people gathered from amongst all peoples will create the bridge that leads humanity into the kingdom of God.

(4) In the far future another physical race will evolve which will be a race of hermaphrodites. These people will possess spiritual powers far beyond anything we have at present.

The point is that all evolution as taught through Bailey is supposed to proceed naturally, without the use of force, constraint or the loss of individual freedom. Those who seek to use such force are those who are called the “Dark Brothers” in the writings.

Representatives (conscious and unconscious) of this Dark Brotherhood are willing to present themselves as ministers of purity and identify with that which the public perceives to be good and quote from great men and women of the past, the scriptures and yes, even the words of Bailey to forward their purpose to control humanity by force while they alone remain free.

But again, if we follow the basic idea of discovering the teachings of a work by examining that work directly one will see that the Bailey writings have been very fair in the treatment of race, especially when one considers the hostile time period in which they were written.

Here are some parting thoughts on race as given by Djwhal Khul through Alice A. Bailey

“Under the great evolutionary process, men and races differ in mental development, in physical stamina, in creative possibilities, in understanding, in human perceptiveness and in their position upon the ladder of civilization; this, however, is temporary, for the same potentialities exist in all of us without exception, and will eventually display themselves. These distinctions, which have in the past set peoples and races so far apart, are rapidly dying out with the spread of education, with the uniting discoveries of science bringing us all so close together and with the power to think, to read and to plan.” Problems of Humanity, Page 90

“Some of the majorities are sincerely concerned in seeing justice done to the struggling and appealing minorities; others are using them as “talking points” for their own ends or are championing the cause of the small and weak nations, not from any humanitarian reasons but for power politics.” Problems of Humanity, Page 91

“As we face the world picture today, we must see it in its true colours and must realize that if the best possible steps, spiritual and material, were to be taken for the smallest and least important of the minorities, it would create a situation which would completely reverse world politics and usher in an entirely new and more enlightened cultural and civilized age.” Problems of Humanity, Page 93