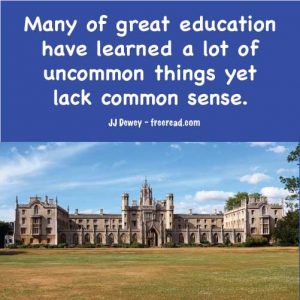 Question Twenty-One: If Jesus had returned to the earth and all the nations laid down their arms and peace was established with the kingdom of God a physical reality, and a man rebelled and shouted: “Jesus is crazy, do not follow him. The old ways are better.” If the man then went about teaching a philosophy completely contrary to the Kingdom of God, what would happen? (a) The man could not abide here on the earth. He would be killed or removed in some way.

Comment: There is nothing in the scriptures that indicates that a person will have his free agency taken away from him when Christ comes again. There is nothing that tells us that there shall not be disagreements at that time. Jesus would not punish the man, for he is merely exercising his right to freedom of speech, which Jesus certainly supported in the New Testament. Jesus’ feelings would not be hurt, as his lofty spirit is above such trivia. If the man led people astray, Jesus might challenge him to a debate and defeat him with the sharp sword that proceeds out of his mouth (See Rev. 19:15) which is the weapon of words that will defeat his enemies. His word was his only weapon against the early Jews and this is the only sword he will need.

Question Twenty-Two: Which is the worst sin?

(a) Looking at a pornographic magazine.

(b) Deliberately hurting your spouse’s feelings.

It should be obvious that looking at a pornographic magazine is not nearly as harmful as making another human being miserable. This question tests common sense.

Question Twenty-Three: Which is the most important?

(b) Living in peace with your neighbor.

Those who answer (a) do not realize that we reverence God by living in peace with our neighbor. It is written: “If a man say, I love God, and hateth his brother, he is a liar: but he that loveth not his brother whom he hath seen, how can he love God whom he hath not seen?” I John 4:20.

Question Twenty-Four: None of Hitler’s ideas had any merit. (a) This statement is absolutely true.

(b) Some of his ideas could have benefited mankind.

A person must be unbiased to answer (b) here. A little study of the man will reveal that he had a brilliant mind and numerous useable ideas, but misguided intentions. Hitler was responsible for the first Volkswagen, which was an idea ahead of his time. Under him, the first jet planes were produced and the most advanced rockets in the world at that time. He also initiated the Autobahn which is still in use.

Because a villain has used his talents in a destructive way does not mean every idea he had was bad. He had to come up with things that sounded good to get a following in the first place.

Question Twenty-Five: When we sin:

(a) We make God, as well as ourselves, unhappy. (b) We only make ourselves unhappy. There is no unhappiness with God.

There is nothing in the scriptures to indicate that God is ever unhappy. If sinning makes God unhappy, then He would be unhappy all the time, for there are millions of sins committed hourly. Furthermore, it is written: “In thy presence is fulness of Joy.” Psalms 16:11.

Question Twenty-Six: Which statement is true?

(a) God knows everything there is to know, even the exact second I will awake in the morning.

(b) It is possible that God doesn’t know everything.

This is a good test of broadmindedness, and it is an argument that has concerned humanity down through the ages . Most people believe that God knows every piece of trivia that will ever happen in our lives. Few ever stop to think that God would not even concern Himself with such things, just as a man is not concerned about which direction a slug under a rock is going to turn. It would be a great distraction to have such things in our consciousness. God is at a state of awareness that does not necessitate having His mind cluttered with facts. Furthermore, there is no scripture in the Bible that tells us that He knows everything; thus it is entirely possible that there are things He does not know. To understand this thoroughly, one must understand what is meant by the term “God”, as everyone has different concepts. We shall explore this later.

Question Twenty-Seven: Let us suppose that the draft was reinstalled and our government intervened in a civil war in a foreign country and took the side of a tyrant who was fighting against real freedom fighters seeking democracy. On the other hand, the media was reporting the situation in reverse as if the tyrant was a good guy and the freedom fighters were terrible rebels. You notice that the mass of people believe the media. Not all do though and quite a few avoid the draft. How would you look upon draft dodgers? (a) They are all dishonorable, for they are breaking the law. (b) They are doing the honorable thing, for the war is immoral. (c) Some are honorable, some are dishonorable.

(a) The black and white person will give this answer, for all he will see is that the draft dodgers went against authority. There are many who believe it is wrong to go against authority no matter what the reason.

(b) This the answer given by a person from the world of feeling. Because the war is wrong, then all who oppose it are right. We must consider here that many are not aware of the true facts behind the war. Even though some may think the enemy is evil and we are fighting for the cause of freedom, they may not want to fight for other reasons, one of which would be fear or cowardice. This, of course, is dishonorable. They may be taking the correct action, but for the wrong reason.

(c) This is the best answer. Some are honorably refusing to fight in an immoral war, and others are dishonorably unwilling to fight in what appears to them be an honorable war because they are not properly informed..

Question Twenty-Eight: What is your attitude toward free agency? (a) It is never necessary to give it up. (b) It is often necessary to subject our will to an authority over us. (c) Our will should be subject only to the God within.

(a) A person who is unwilling to sacrifice his personal desires at all cannot Synthesize. In fact, he will never be completely at unity with even one other person.

(b) This is the other extreme. The person needs an authority to follow. This is not Synthesis, for the sheep never know the mind of the shepherd, but only follow on blind faith that they are led correctly.

(c) This answer is after the pattern set by the Christ: “Not my will, but thine be done.” This leads to Synthesis, for if two or more people follow the God within or the Holy Spirit, then they will be as one mind, for they are led by one mind and they “have been all made to drink into one Spirit.” I Cor. 12:13.

Question Twenty-Nine: If your daughter came to you and announced that she was in love with a man who was a member of a cult who looked upon their leader as God, and that she planned to marry this man with or without your approval, what would be your reaction?

(a) It’s her life. Let her do what she wants. (b) I would use every means at my disposal to stop her, even force if necessary. (c) I would reserve my judgment until I got to know him a little better. (d) If I disapproved, I would try to persuade her to not marry him, but leave the final decision up to her.

This is one of the hardest questions to answer honestly. I would guess that about half of the populace would react differently in a real life situation than they would answer here. Nevertheless, the answer will give an indication of broadmindedness and common sense.

(a) This answer scores zero. It indicates indifference. Indifference is not broadmindedness, and is not a virtue, but is usually less harmful than th totalitarian approach.

(b) This rates the lowest score, because free will should not be infringed upon by another person except to prevent imminent violence. There is no indication that the man in question is violent.

(c) This is a good answer. It is possible the person is actually quite harmless and that you may like him if you give him a chance.

(d) You may have answered this along with (c), which would have scored the highest points. If you disapprove of your daughter’s action, then there is nothing wrong with trying to use persuasion and reasoning and even appealing to her emotions, but after you present your case the decision should be hers. If she makes a mistake it will still be a learning experience for her and all is not lost. All is never lost.

Question Thirty: If your daughter actually married the above man, what would be your reaction?

Whoever answers (a) is at least honest. Many more would react this way than is realized. (c) is obviously the best answer. However, those who answered this one may want to honestly ask themselves if they would really react in such a kind manner.