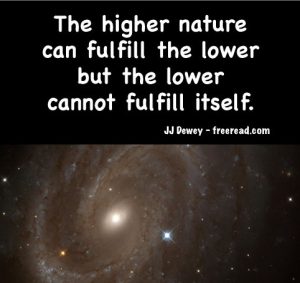 The Overshadowing of Jesus Part II

Several voiced questions about how an overshadowing would be different from the Christ consciousness and how one would attain such a thing.

The Christ principle resides within all of us, but the overshadowing we are talking about is about the cooperation of an individual entity which is an entirely different thing.

The three principles of the Godhead are reﬂected in fullness with each one of us. The Christ, as an aspect or principle, lies mostly undiscovered within each of us and this is a totally distinct concept apart from the Christ who taught in Jerusalem 2000 years ago.

Each one of these three aspects of the godhead has a representative on the earth who has manifested that principle to a degree of relative perfection. The entity who descended upon Jesus at His baptism and coexisted in his body is that representative for this little planet. This entity has been various great teachers in the earth’s history including the Hindu Lord Krishna and Melchizedek from the days of Abraham.

When we obtain the fullness of the Christ principle within ourselves we will have power over our form to the extent that if we are killed and our body torn apart, we can “resurrect” it and reappear in the ﬂesh on the physical plane. Since none of us have that power yet, the only way to manifest the Christ principle in fullness among the sons and daughters of men is through the overshadowing of an individual entity who has progressed out of the kindergarten we are in.

An overshadowing is not an event we can afﬁrm or decree because the decision to act is made by the overshadowing entity who is, in this case, the one we call the Christ. It is totally up to Him as to who He decides to directly work with.

All we can do as individuals is to aspire to be a usable vessel for Him. If our vibration has not reached a certain degree then an overshadowing is impossible. If Christ were to attempt to directly overshadow the average seeker out there, the high spiritual energy would cause extreme discomfort. Many though are linked to his consciousness and receive inspiration through him or other souls linked to him including our own Higher Selves.

The overshadowing experience was disturbing enough for Jesus. Right after the spirit entered into him at the baptism He went straight into the wilderness and fasted for forty days in an attempt to harmonize with the High and Holy Presence.

I was asked if Christ was an archangel. Some say He was the Archangel Michael who fought Lucifer in the war in heaven mentioned in Revelations chapter 12, others give Him the name of Sananda, one of the great Kumaras, still others think he was Jehovah but I will say that in addition to Krishna and Melchizedek, He was the last Adam around 6000 years ago and then became the spiritual Adam 2000 years ago. (See I Cor 15:45) Suffice it to say that he is the representative of the second aspect of the godhead on this planet.

In general advanced souls do serve as angels or servants of the race between lives. In addition to this there are non human angelic lives that also work with the human race and are contacted through the language of universal symbols.

The second coming of Christ has to be the most misunderstood doctrine in all Christendom for there is not one of the sects that is even halfway preparing for it correctly. When the Christ comes again he will again ﬁnd his greatest response from the same type of people who received him the last time: the non-religious, and people who were ostracized by the normal religious community.

When Jesus was with the twelve they asked him: “What shall be the sign of thy coming and of the end of the world?” The word “coming” comes from the Greek PAROUSIA which more correctly is translated as “presence”. This word is used by Paul as follows: “Wherefore, my beloved, as ye have always obeyed, not as in my presence (PAROUSIA) only, but now much more in my absence.” Phil 2:12.

PAROUSIA means the opposite of “absence.” The word can also be translated as “nearness.” Thus we see that the signs given in Matthew chapter twenty-four are indications of the nearness or the presence of Christ. The three stages of the coming of Christ are:

(1) The teaching and introduction of the Christ Consciousness. The Son of Man or the Christ consciousness will be lifted up to a large group of people.

(2) The partial and/or complete overshadowing of certain disciples and groups.

(3) The appearance of Christ himself in a physical body

The second step is the beginning of the presence of the entity who is Christ on the earth. He shall indeed be present even though it may not be in a body of his own to start with, and this event is actually prophesied of in the scriptures themselves.

A careful reading of Zechariah will reveal that the persons mentioned as Joshua and Zerubbabel are representative of the Christ. Keeping this in mind let us read: “Hear now, O Joshua the high priest, thou, and thy fellows that sit before thee: for they are men wondered at: for I will bring forth my servant the BRANCH. For behold the stone that I have laid before Joshua; upon one stone shall be SEVEN EYES, I will engrave the graving thereof, saith the Lord of Hosts, and I will remove the iniquity of that land in one day.” Zech 3:8-9

Here we have mention of Joshua who is Jesus and the stone which is laid before him who was the overshadowing Christ, the stone of Israel. Then there is the servant, the BRANCH who will repeat the vibration of Moses on a higher octave. Finally there is a group of disciples who are “wondered at.” These persons are the seven eyes of the stone of Israel or the Christ. They are seven entities who shall experience the overshadowing presence of Christ as Jesus did. We see that when this will happen that the Lord will remove the iniquity out of the land. Thus it is obvious that it shall occur near the beginning of the new age of peace.

The seven eyes are mentioned again in the next chapter; “For who hath despised the day of small things? For they shall rejoice, and shall see the plummet in the hand of Zerubbabel with those seven, they are the eyes of the Lord, WHICH RUN TO AND FRO THROUGH THE WHOLE EARTH.” Zech 4:10.

We ﬁnd another mention of this in the Book of Revelation: “And in the midst of the elders, stood a Lamb as it had been slain, having seven horns and seven eyes, which are the seven Spirits of God SENT FORTH INTO ALL THE EARTH.” Rev 5:6

Seven people are mentioned in another prophecy concerning Christ: “But thou, Bethlehem Ephratah, though thou be little among the thousands of Judah, yet out of thee shall he come forth unto me that is to be ruler in Israel; (Christ) whose goings forth have been from of old, from everlasting. (He has the experience of many lifetimes.)…And this man shall be the peace, when the Assyrian shall come into our land: and when he shall tread in our palaces, then we shall raise against him SEVEN SHEPHERDS, and eight principle men.” Micah 5:2 & 5

We see from these scriptures that there will be seven shepherds raised up in the last days who will be called the eyes of the Lord. They will run to and fro through the earth and ﬁnally assist the Christ in driving back the Assyrian or the Anti-Christ forces. Altogether there will be eight principle men if we include the Christ. They will be men of wonder because these seven men will be overshadowed and will fulﬁll the prophecy of doing even greater things than Jesus did. They will be greater because the Christ will come in unto them and sup with them; and the Christ has even more wisdom, experience and power than he had two thousand years ago so we can look forward to great things ahead.

Christ will use these seven entities as seven projections of his presence through the assistance of other Masters in his group. His focus will shift from one person to another as His overshadowing presence is needed and will produce a tremendous effect as if there were a group of saviors on the earth.

The second stage of the presence of Christ involves a larger group of disciples wherein the Christ within them will be manifest on a larger scale. These disciples will try and fulﬁll the commandment given by Paul: “Let this mind BE IN YOU, which was also in Christ Jesus: Who being in the form of God thought it not robbery to be equal with God.” Phil 2:5 In speaking of himself and faithful disciples he said: “But we have the mind of Christ.” I Cor 2:16

Many people quote these scriptures, but few believe them. If we really have the mind of Christ then we will ﬁnd that all of the scriptures that apply to Jesus also apply to us. For instance, Jesus said: “And no man hath ascended up to heaven, but he that came down from heaven, even the Son of man which is in heaven.” John 3:13. We are also Sons of God who will ascend into heaven who have in the beginning come from heaven.

Jesus continues: “And as Moses lifted up the serpent in the wilderness, even so must the Son of man be lifted up.” John 3:14 It is true that this corresponds to His death on the cross, but He also wanted to illustrate that each man should have the Son of man, or the mind of Christ lifted up within him so that “when he shall appear we shall be like him”. I John 3:2.

The Son of God that can be lifted up within every man forms a part of “Christ, the Son, and God the Father, and the Holy Spirit, which is ONE Eternal God.” Thus when we lift up the Son of Man within ourselves, we also become the Only Begotten Son. We are an extension of the only Son there is; all the sons of men share an oneness that few can realize. Paul tried to teach the real Christ when he said: “For as the body is one, and hath many members, and all the members of that one body, being many, are one body: SO ALSO IS CHRIST…Now ye are the body of Christ and members in particular.” I Cor 12:12&27.

We can see that Christ is an ofﬁce that is composed of all those who take upon themselves His name. To take upon ourselves the name of the Son means a lot more than remembering the works of another man however great he is. It means that we are to have the mind of Christ within us and to not think it mockery to be equal with God or to be a “savior on Mount Zion,” or a Christ. (See Obadiah Verse 21)