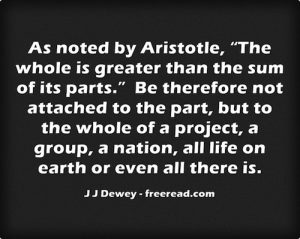 The Body of the Cosmic Logos, Part 2
The Greater Lives

We have thus briefly covered the seven major centers and their accompanying rays for the human body. Now there are many other lesser centers, but these are the major ones taught in the Ancient Wisdom. DK does not talk about how they play out in the microcosmic lives but does correspond them to greater lives than the individual human.

These greater lives include groups, nations, humanity as a whole, the planet, other planets, the solar system and, last of all, the Cosmic Logos, or The One About Whom Naught May Be Said, which consists of at least seven solar systems. Beyond this great life little is said by DK. Unlike many others, he doesn’t speak of a galactic or Universal Logos, for understanding the Cosmic Logos seems to be more than we can handle in our present state of consciousness.

Concerning the centers of nations DK says this:

“Nations, for instance, have seven centres, as have all forms of existence from the human and animal upwards, and it is an interesting study to discover these centres and note the type of energy which flows through them. In connection with the United States of America, Chicago is the solar plexus centre, whilst New York is the throat centre and Washington the head centre. The heart centre is Los Angeles. The heart centre of Germany is Munich, and its head centre is Nuremberg, whilst Berlin is the throat centre. London is, of course, the heart centre for Great Britain (and temporarily it is also the head centre, though this will not always be the case), whilst Ottawa is the throat centre and Sydney is the solar plexus centre of the British Empire.” Externalization of the Hierarchy, Page 85

The United States is an interesting country in which to analyze the centers. It is interesting that he gives us an incomplete list, which is:

Note that he leaves out the ajna, sacral and base centers.

In the day he wrote this. the sacral center surely would have been Detroit since it was the main center of physical creation – manufacturing most of the cars driven at that time. Now that has changed and the prime source of our most used products is the Silicon Valley region in the San Francisco and surrounding region. This includes many of our computer related products, solar panels and electric vehicles.

In DK’s day, the base of the spine would have most likely been Philadelphia, for there was laid the foundation of life for this country. That, however, may have changed to Seattle today, as focus has shifted away from nationalism to just living the abundant material life. Thanks to Microsoft the foundation was laid for our computerized world, and there we also have Amazon which has become the lifeblood of most every consumer product produced.

So, where would be the ajna center, the eye of spiritual vision? He did not name one because such a place does not yet exist, so he just lumped the head as a whole into one center at Washington DC. There are a number locations which would like the title of our spiritual light. Many think the Vatican or Jerusalem are good prospects for the planet as a whole, but few enlightened souls look in their direction for higher consciousness. In the United States, Salt Lake City is the only major city built and headquartered by a religion, but few outside the body of LDS true believers sense much inspiration coming from there.

As it is, Washington DC, imperfect as it is, represents both centers. This is evidenced by the all-seeing eye (representing the third eye – the ajna center) on the reverse of the Great Seal of the United States which is printed on our dollar bills.

The United States has attempted to shine greater light on freedom and democracy to the world, though with imperfect results. It is also the source of much of the world’s new ideas of spiritual thinking from new religions to many New Age movements.

Unfortunately, there is no separate city of lights where the ideals and inhabitants are enlightened enough to be a light unto the world. Such a place will manifest in the not-too-distant future and then we shall live in a world where there is an open third eye, a center to guide the world in the ways of Spirit, rather than the material side of life.

Concerning humanity as a whole, DK tells us there are five cities that represent active centers of power for humanity. The number is five because we are in the fifth rootrace. When the next race manifests, a center in Africa will develop and finally, when the seventh and final rootrace appears, a seventh center will be seen in Australia says DK.

Currently, the five centers with their personality and soul rays, plus their astrological signs are:

Concerning these, he says, “The five cities which are the exoteric expression of the esoteric centre of force and through which the Hierarchy and Shamballa are seeking to work are the correspondence in the planetary body to the four centres up the spine and the ajna centre in the body of humanity and of individual man.” Esoteric Astrology, Page 528

He doesn’t tell us which cities are with the specific five centers mentioned, but the rays given as well as their order listed will supply some hints.