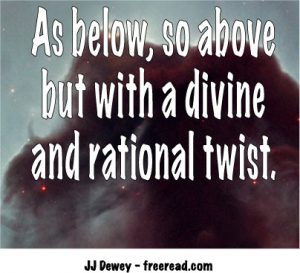 The Body of the Cosmic Logos, Part 6
The One About Whom Naught May Be Said

Finally we come to an examination of a most mysterious being of immense proportions which DK calls: “the Logos of our Solar Logos.” (Initiation Human and Solar, Page 162) Even Its name has mystery behind it as if it came from a Harry Potter story. One character there had the title of, “He Who Must Not Be Named.” DK tells us that the being who is higher than our Solar Logos is called “The One About Whom Naught May Be Said.”

The reason for this title is that this entity is so far in advance of the Masters, Shamballa or even the Solar Logos that understanding Its consciousness by us would be like a snail trying to understand human thinking. DK words it this way: “It is well to note that this Existence is termed “the One about Whom naught may be said”, not because of secrecy or mystery, but because all formulation of ideas about His life and purpose are impossible until one has completed the term of evolution in our solar system. Note, I say, our solar system, not just our planetary existence. Speculation about the Existence who, through His life, informs seven solar systems is wasted energy.” A Treatise on White Magic, Page 274

It is interesting though that even though It’s name implies that naught can be said, DK still manages to say a few things about Him. Really, we would expect nothing less from such a master teacher.

Here is what most Bailey students know for sure. The One About Whom Naught May Be Said, or The Cosmic Logos for short, is a life that occupies a body that is composed of at least seven solar systems. Just as the life of our Solar Logos occupies a body that consists of the Sun and the planets, this great life has incarnated into a much vaster expanse.

Concerning this cosmic logos, DK says that “one complete vital body forms the manifestation of this mighty cosmic Being. Vortices of force on the cosmic etheric plane form the etheric framework of seven solar systems in the same way that the bodies of the seven Heavenly Men are the etheric centres for a solar Logos, and as the seven centres in man (existing in etheric matter), are the animating electrical impulse of his life.” Treatise on Cosmic Fire, Pages 351-352

What is not clear to students is, what is it exactly that makes up those seven centers?

DK’s writings give us numerous interesting hints on this Being to contemplate, but they are far from presenting a complete picture and some of the terms used are obscure. He seems to use the words “constellation” and “solar system” interchangeably when they have quite different meanings. This is strange because he correctly defined the terms as follows:

“A solar system consists of a sun as the central focal point, with its series of attendant planets, which are held in magnetic rapport in their orbits around that sun.

“A constellation consists of two or more solar systems or series of suns with their attendant planets.” Esoteric Psychology, Vol 1, Pages 152-153

He usually follows this definition in writing about our solar system in relation to the Cosmic Logos. For instance a number of times he speaks of “seven solar systems (of which ours is but one)” Initiation Human and Solar, Page 160

He does this same thing with Sirius, sometimes calling it a star and other times a constellation. (See Treatise on Cosmic Fire, Page 904)

Our solar system just consists of one sun and is not a constellation by any standard definition. Sirius does have a small white dwarf companion star, but no astronomer calls it a constellation for it is a part of the constellation Canis Major which has 11 major stars which includes Sirius.

.Some writers of the Ancient Wisdom sometimes used the word “constellation” in relation to a single orb. Here is an interesting explanation by a noted Theosophist as to why this may be the case:

“…when our own ancient esoteric philosophers spoke of the planets, spoke of Venus, or of Mars, for instance, as a “constellation,” they knew perfectly well what they were saying, and they did not speak in ignorance. Why did they speak of a planet as a constellation, which in ordinary astronomical terminology or parlance means a collection or a gathering of stars? Because every one of the visible planets we see is but one of seven, six of them invisible to our physical eyes, the seven forming a planetary chain. And, furthermore, these planetary chains are composed of seven distinct and separate globular bodies, forming, to the eye of the seer, a true constellation; and furthermore still, each one of these seven globes has fourteen different lokas (or rather seven lokas and seven talas) or “worlds” attached to it, making thus, counting all the seven globes, 49 worlds or planes or lokas and 49 talas.” Fundamentals of the Esoteric Philosophy, G. de Purucker, Chapter 34

If de Purucker is correct, then the ancients would not see one planet or sun, but a chain or a constellation of them, even though there may be only one in physical manifestation. Since DK has studied many of these manuscripts, he may just be in the habit referring to any solar body as a group or constellation.

Another possibility is that this was a simple mistake made by Alice A. Bailey in the course of transcribing DK’s thoughts. He had great praise for her, except in one area. He said that she did not have a good grasp or knowledge of science, and this caused some limitation in expressing himself in scientific terms.

Now there are certain people who have difficulty with scientific concepts and do not differentiate between a solar system, a constellation, a galaxy or the universe. I’ve read a number of New Age authors who get these mixed up. So it is possible that Mrs. Bailey is to blame here.

A third possibility is that DK used these incongruent terms on purpose to hint at a deeper meaning.

Such a hint may be seen in the way he describes the Cosmic Logos. Sometimes he describes it as seven solar systems as follows:

“the ONE ABOUT WHOM NAUGHT MAY BE SAID, Who ensouls the seven solar systems.” Treatise on Cosmic Fire, Page 409

“The Life which expresses Itself through seven solar systems. The One About Whom Naught May Be Said.” Esoteric Psychology, Vol 1, Page 155

‘through His life, informs seven solar systems” A Treatise on White Magic, Page 274

Then other times he defines It as seven constellations:

“…the seven constellations which form the body of manifestation of the One About Whom Naught May Be Said.” Esoteric Psychology.” Vol 1, Page 332

“Each of these Paths eventually leads to one or other of the six constellations which (with ours) form the seven centres in the body of the ONE ABOUT WHOM NAUGHT MAY BE SAID.” Treatise on Cosmic Fire, Page 1242

This seems to be confusing to many students who ask, “Is the Cosmic Logos composed of seven individual solar systems or seven constellations?”

The interesting answer is that both are correct. I submit to you that the title “The One About Whom Naught May Be Said” refers to just not one great being of high consciousness, but all great galactic beings that are beyond the comprehension of even the Masters. Thus, a being who inhabits seven solar systems as well as a greater one over seven constellations are both in this category. Even a life who inhabits over 200 billion stars in the Milky Way Galaxy would be A One About Whom Naught May Be Said.

On this note DK clearly acknowledges that there is more than one Cosmic Logos and even tells us that it is not known for sure to which Logos our solar system belongs:

“…until it is known which cosmic Logos recognises our solar Logos as a centre in His body, and which six other systems are affiliated with ours, it will not be possible to touch upon the systemic stage of manasic development.” Treatise on Cosmic Fire, Page 402

So we are told here that there are a number of Cosmic Logoi to which we could belong and we do not know all the details.

He makes it clear that there is more than one Cosmic Logos:

He writes of “those stupendous Existences Who hold a position in the cosmic Hierarchy similar to that of the “ONE ABOUT WHOM NAUGHT MAY BE SAID.” Treatise on Cosmic Fire, Pages 1117-1118

The phrase, “those stupendous Existences” verifies there is more than one.

Notice he uses the article “a” rather than “the,” indicating one of many.

“Therefore, we can do no more than accept the fact of the inconceivable magnitude of that EXISTENCE which is manifesting through seven solar systems, and the extension of this concept of Being to embrace the entire vault of the Heavens.” Treatise on Cosmic Fire, Pages 412-413

Here we see the idea of lives embracing a body such as our Cosmic Logos can be extended “to embrace the entire vault of the Heavens.”

He tells us that there are Cosmic Logoi greater than the one to which we belong:

Concerning the mystery of fire he speaks of:

“…beyond the above named constellations (in the body of the Cosmic Logos) is still another cosmic centre. The name of this centre is one of the secrets of the final initiation, the seventh.” Treatise on Cosmic Fire, Page 183

Here he clinches the idea of many Cosmic Beings referring to a cosmic Logos as a “cosmic wheel.”

‘A cosmic wheel, or a group of seven constellations … These cosmic wheels, according to the esoteric books, are divided into forty-nine groups, each comprising millions of septenary constellations.” Treatise on Cosmic Fire, Page 1085

Interesting to note is this is in harmony with the Bible which says:

“If thou see the oppressions of the poor, and violent judgements, and justice perverted, in the province, wonder not at this matter: for he that is high hath another higher, and there are others still higher than these.” Eccl 5:8 Douay Version

DK has to be referring to the center of the galaxy, the black hole, when he speaks of: “that central spot in the heavens around which our solar system revolves, and which is termed ‘the central spiritual sun.’” Initiation Human and Solar, Pg 130

DK seems to indicate that there are revolutions around other centers, but this has to be in some other association or relationship other than the linear dense physical, as astronomers tell us that the Sun only revolves around the center of the galaxy.