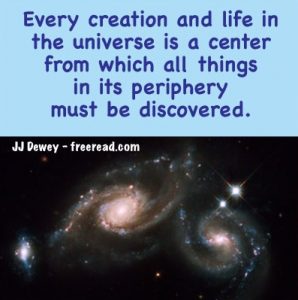 The Body of the Cosmic Logos, Part 1
Centers and Rays in the individual

NOTE: This is the first of a ten part series concerning a subject of great interest to Bailey students. This concerns the mysteries behind a great life who DK calls “The One About Whom Naught May Be Said”. I have tried to write about the complex with as much simplicity as possible so both casual and serious students will find it interesting.

The great teacher, Djwhal Khul (or just DK), tells us that there is a great being who is higher in consciousness and evolution than either our Planetary Logos or the Solar Logos. Its life permeates through at least seven solar systems of which ours is one.

Its consciousness is so advanced that it is beyond even the masters on earth to comprehend. They have thus given this high entity the unusual name of “The One About Whom Naught May be Said.” Sometimes this is shortened to “Cosmic Logos.” We are given to understand that silence concerning this being is not because of demanded reverence, but because Its consciousness is so beyond ours that any full understanding is mere guesswork. Think of a snail trying to understand the mind of Einstein and you get the picture.

The fact that this being is of such a high consciousness is interesting to contemplate when you consider that Its body of seven solar systems is just a drop in the bucket compared to the Milky Way Galaxy, as a whole, which has over 200 billion solar systems within its life. This would indicate that there are billions of other Cosmic Logoi just in our galaxy alone and if a galactic logos exists then it would be One About Whom Naught May be Said in relation to our Cosmic Logos.

Then it further stretches our imagination to consider that our telescopes have discovered billions of galaxies, each with billions of solar systems, with no end in sight. This tells us that in this living universe there are indeed higher lives that defy the imagination.

For this treatise we will focus on our Cosmic Logos, of which each of us form a small part. This is the highest life concerning which any information from the teachings in the Ancient Wisdom is available.

Yes, I know, there are many believers who think they know all about the One Great Life we call God who created all things, but quoting a scripture or two is no indication that one even understands the Logos of our planet, let alone the universe.

So let us examine what is available and see if we can expand our consciousness to envision lives greater than ourselves.

All lives within our ring-pass-not live in bodies created by the interplay of seven rays which we see represented in the seven colors of the rainbow as well as seven notes in the musical scale. These manifest through humans in the seven major centers called the chakras. These seven divisions not only appear in humans but all life forms from the atom to a great Logos. The advanced atoms such as radium and uranium have seven electron shells corresponding to the seven chakras which are all active in the advanced human.

The first chakra is at the base of the spine. This supplies the foundation energy for the other chakras and the life of the body as a whole.

All seven rays have some interplay on each of the chakras, but there will always be one in particular which will dominate for each center. The dominate one is not always the same for everyone, for in some chakras it will shift as the seeker climbs the ladder of spiritual evolution.

The overall dominate ray for the base chakra is Ray One, that of Will, Power and Purpose. DK tells us this applies to the average person as well as initiates. (Esoteric Astrology, Page 517) Then, in between average and advanced individuals others have their base dominated by rays four and seven. He tells us that the “average aspirant” has a dominate ray four (Esoteric Psychology Vol 1, Pg 261) and still others ray seven will dominate at the base. (Esoteric Psychology, Vol 2, Page 521)

The fact that three different rays dominate at the base of the spine in various individuals tells us that we cannot specifically assign one particular ray with that center whether it be human, planetary or cosmic.

The next center up the spine is the sacral, which governs sex and physical creation. This is also influenced by more than one ray. For the undeveloped person it is governed by Ray three. (Esoteric Healing, Page 152 & 178) This seems to switch to Ray Seven as the person evolves. (Esoteric Astrology, Page 517). Then in another reference to this center DK connects it to Ray Five (Esoteric Psychology, Vol 2, Page 521) with no explanation as to where it fits with spiritual evolution.

The third center up the spine is the solar plexus, which governs the lower emotions. This is generally ruled by Ray Six (Ray of Devotion) though he does note that it “registers that of the second aspect.” (Esoteric Healing, Page 178). So, Ray Two does have a part, most likely in one who is spiritually developed.

The fourth center is the heart. Now keep in mind that these centers are not in the physical body or on the actual spine, but in the etheric body behind the spine.

The heart center is pretty much centered on Ray Two – the Ray of Love Wisdom. DK gives no other ray that ever dominates.

He does say, though, that there is a reflection of the heart center within the head center, and that is polarized in Ray One, the Ray of Power. He doesn’t tell us whether the heart center in the head remains under the domination of Ray Two or acquiesces to Ray One, though I think we may safely assume it is influenced by both rays.

He does make this interesting statement concerning: …“the Buddha and the Christ, Who are both embodiments of the heart centre of the planetary Logos, for the Buddha represents the twelve-petalled lotus in the head, of which the Christ represents the counterpart, the twelve-petalled lotus of the heart centre.” Externalization of the Hierarchy, Page 86-87

In addition, he tells us that the Buddha represents the wisdom aspect of this second ray and the Christ the Love. (Discipleship in the New Age, Vol 2, Page 516) This would tell us then that the wisdom aspect dominates in the head and love in the heart, but both centers would represent the two aspects to some degree.

In addition, he says: “the second ray deals largely with the soul’s activity through all the centres (those above and those below the diaphragm) but with the heart as the prime centre of attention.” Esoteric Healing, Page 130

So because this entire solar system is dominated by the second ray its influence is extremely pervasive and has some influence on all the centers, but “the heart as the prime centre of attention.”

The fifth center up the spine is the throat, which is a higher correspondent to the sacral. Instead of stimulating physical creation through sex, this center directs inspired creation through art, music, writing and other creative endeavors. Normally, DK references the Third Ray in relation to it but adds this: “Though the human throat centre is primarily expressing the third ray, there is an interesting situation to be noted in this connection: two ray energies control this centre at this time.” Telepathy and the Etheric Vehicle, Page 136

In that text he indicates that other ray is the seventh and then adds this:

“The throat centre of the average integrated personality is governed by the third ray and is strongly energised by third ray energies (again seven in number), whilst the throat centre of the spiritual aspirant, of disciples and initiates below the third initiation is responding primarily to seventh ray influence, and this is peculiarly the case now as the seventh ray is in incarnation.” Telepathy and the Etheric Vehicle, Page 137

His overall writings indicate that, even though the seventh ray is strong in some disciples the third ray has a strong influence in everyone. In addition, the first ray comes into play with the initial stimulation of the throat center. He says:

“people who work creatively usually have first ray personalities at the time that the throat centre becomes dynamically active for the first time.” Discipleship in the New Age, Vol 2, Page 122

As we rise above the spine we come to the two head centers, the first of which is the center between the eyebrows, often called the third eye or the ajna center. This is a center of higher spiritual vision and understanding as well as a director of energy.

The most common ray associated with this is the Fifth Ray of Concrete Knowledge. (See Esoteric Astrology, Page 517 and Esoteric Psychology, Vol 1, Page 261) Then, for advanced disciples and initiates, it changes to Ray Three. (Esoteric Healing, Page 154) Then he also gives Ray Four as dominating, (Esoteric Psychology, Vol 2, Page 521) but does not indicate what would make this change.

Finally, we come to the highest center of the major seven at the top of the head, often called the crown. Of this he says, “ There are twelve major petals of white and gold, and 960 secondary petals are arranged around the central twelve.” Letters on Occult Meditation, pages 77-78 Also Treatise on Cosmic Fire, Page 168

Even though the crown is a few short it is often called the Thousand Petalled Lotus.

Though all rays and many energies move through this center the dominate one is consistently said to be Ray One – Will-Power-Purpose.

Even though each center is influenced by all seven rays, certain ones will dominate according to the spiritual advancement and the consciousness of the person. Let us then tabulate the centers and the rays most likely to dominate.

The Crown – Ray One
The Ajna – Normally Ray Five, but sometimes Three and Four
The Throat – Normally Ray Three, but in advanced souls Ray Seven is strong.
The Heart – Ray Two
The Solar Plexus – Ray Six, but influenced by Ray Two.
The Sacral Center – Rays Three, Five and Seven.
The Base of the Spine – Rays One, Four, and Seven.

There is much more that could be written about the centers and the rays, but the main intent here is to establish the links between them as we examine the body of the great logos of which we form a small part. The centers and rays of humanity have correspondences in greater and lesser lives, so by understanding ourselves, we can gain some understanding of the greater.