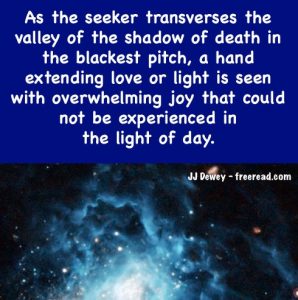 An excerpt from The Molecular Relationship may need some clarification:

“To understand this relationship, the first principle that must be realized is that there is life and consciousness in all forms, whether they be atomic, molecular, human, planetary or solar. Relatively perfect relationship which we call the Molecular Relationship exists in all forms from the cellular level on down. Even though life pervades all forms above the cellular, such lives have not reached Molecular Relationship. The cells within the organic lives such as plants, animals and humans have such relationship, but the greater lives are yet striving to obtain it. The plants yield to animals and the animals yield to human as the final point of attainment for this system. Now humanity goes forward with bodies of mineral, plant and animal components to bring completion to the present Purpose of God.

It is thus our responsibility as a species to take relationship to its next great beginning.”

Some may have a problem with the statement: “ the greater lives are yet striving to obtain it.”

By greater lives I mean composite lives such as nations planets, suns galaxies and so on.

Relative to us humans there are greater lives who do practice it such as Christ and his Masters of wisdom, but they are in human form and are the beginning of its implementation among humans on this little planet.

Among us regular mortal humans who do the grunt work on this earth the relationship has never taken root. This is what I refer to as the next great beginning – that is to establish it among us as a permanent system. This will be a great evolutionary step for this planet. Nevertheless, it will not make us unique for this relationship does exist on other planets, but percentage wise they are very few in number. Overall humanity is young in the universe and we have a lot of Becoming ahead of us.

A reader quotes me saying:

“Imagine having the power to move the star system of Alpha Centura into our> solar system creating a double star and much easier access to its planets so we can transform its primitive life into a garden of Eden.”

Then he adds: Seems to me, that if you did this, you would throw off the balance of our solar system. As quoted from my friend, “The added radiation from another star in our solar system would fry all life on our planet. “Breakfast, anyone?

I understand that it’s fairly well known and accepted in the scientific community, that changes in space can affect wind patterns on Earth, and cause various other weather patterns to occur. It’s even suggested that the Eclipse on August 11th of this month, helped to cause that moderately destructive tornado that materialized in the heart of Salt Lake City. Tornadoes aren’t supposed to occur in Utah.

I’m not sure we would want another star in our solar system. Beyond the added radiation, it could negatively affect the gravitation pull of our own sun, thus disrupting the normal orbit of our own planet, possibly causing us to hurl out in to space, or be torn apart completely. If none of that happened, then the extra daylight would heat up our planet exponentially (greenhouse effect) and melt the polar ice caps a little faster than I would feel comfortable, thus flooding most of our land.

When the time comes (in the far future) that we can move stars and if we decided to move Alpha Centauri here it would be probably placed a distance away, like beyond the orbit of Pluto. When you look up in the sky you would not see a bright sun, but a very bright star with the luminosity of the moon. Still this would make the system very accessible with future technology. Right now traveling at the speed of light it would take 4.3 years to get to Alpha Centura but with the new location would only take a couple days using future technology.

“How can a person know if they are dealing with someone who is, consciously or unconsciously, affiliated with the dark brothers? I ask because of someone I know who seems to make it a point to keep me off balance. I’m beginning to think that if I never saw this person again, I’d not miss them for a minute (and this is someone with whom I have been good friends for the last nine years). I’m kinda lost here, because I wonder, am I supposed to look for the Christ within this person even if they are “one of them”? Any guidance would be appreciated.”

Behind every person, even a Dark Brother is a soul connected with God. The difference between a Dark Brother and everyone else is that communion with the soul has been completely severed by himself and cannot be reconnected in this system.

Only a small handful have retrogressed to this degree. Even the typical mass murderer has not completely severed the link.

But to see the Christ, or the soul, within a person does not involve seeing what is not. If the person is mean spirited or irritating you do not pretend that he is a nice guy. Instead, you put your attention on the true reality – that behind this person – no matter how apparently evil he is, is the Soul.

Seeing the Christ in an undesirable person causes you to forgive him of all offenses, because you are seeing from soul to soul. This does not mean that on a personality level you have to pretend like he is a nice guy and be his friend. If you are a person with soul contact you should seek friends who also have such contact, but when those of low vibration cross your path recognize that the Christ is within them and is seeking to surface and let them go on their way with no negativity being sent or received by you.

You have probably never met a true Dark Brother, but you have come across many who are manipulated by them. As entities approach closer to the dark side you can recognize them through a “disturbance in the force” when you are around them. It will sometimes feel like they are taking your energy. You can neutralize this effect by taking your attention from them and placing it on the Christ within.