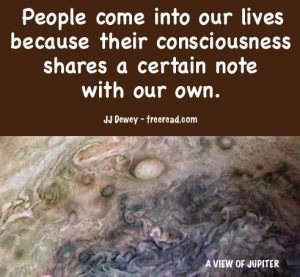 Your working partner will often be one with whom you do not share romantic energy, even though in some cases the couple may go in that direction. It will be similar to a couple working together in the workplace which is a common occurrence. Many males and females work together as friends and never get interested in a romantic level, but then there are those who do.

This will be a similar correspondence in the working partner relationship. Just as in the workplace you can usually shift to a new partner without hurt romantic feelings even so this can happen in the Molecular Relationship.

There is one main advantage in the Molecular Relationship of the working partner over the workplace and that is you make the choice as to who your partner will be. Therefore, you should have a lot in common.

Also you will not be stuck with your working partner for any long length of time. You are free to change at any time a more suitable replacement is available.

The first molecules must always have twelve male/female units in it. In addition to this, as the numbers expand, there will also be associate members who are linked to the growing molecule. Some of these people will have working partners and some will not. Then when 12 more male/female units become available another molecule will be created.

I did not say that we humans on this earth will be the first to begin the Molecular Relationship. This relationship is currently practiced by all the higher lives of Masters and beyond.

This relationship is very ancient, but it will be relatively new to humanity. Even though it has been attempted in past ages it has never been firmly established in the human kingdom on this earth.

The statement that probably threw some off most is that man is the only conscious creator in the universe.

Many lower forms create also. For instance atoms arrange themselves into crystalline order. The seed grows into a flower. The beaver builds a damn. But these are not conscious creations. Ages and ages ago these creative expressions were perfected through conscious creation, but when conscious creation perfects a thing then creation proceeds without the involvement of self consciousness. The atoms arrange themselves through a program they adhere to as does the seed when it grows to the flower. Even so, does the beaver follow a program when he builds the damn. He does not sit back and think to himself: Now let’s see. How do I go about building this dam? If he did then each beaver would build a dam with much more differences from the other beavers than is now the case.

As we move up the evolutionary ladder we find that true conscious creation does proceed from human form and intelligence. When the human builds a dam he consciously decides and plans how to go about it. Then when dam making is perfected he follows the plans developed in the past by other humans, or a program similar to the beaver.

The beaver is limited to plans programmed within him, but the human can go where “no one has gone before” and send a man to the moon and beyond through conscious creation.

Humans constitute the fourth kingdom in nature. The fifth kingdom is loosely called the Kingdom of God and is occupied by Masters of Wisdom, but even these high individuals are in human form when they consciously create in this physical universe.

The Angel Kingdom is on a different path of evolution than is man and progresses through following the will of God without consciously questioning anything. This is why certain deva lives, even though used by the Masters for good, can bring disaster if prematurely contacted by a human. Their marching orders are given to them through sounds, mantras and symbols and thus they can become as a beneficial wind or a destroying hurricane to the ignorant.

All lives pass through the human kingdom at one time or another and consciously create until fullness of joy is achieved. Then we move on and leave normal consciousness behind and identify more fully with the Life principle and BECOME through a principle of Identification rather than Consciousness. Once this is achieved we lose interest in being a direct participator in the construction of physical form and work from a point of initiating and directing ideas that are the basis of conscious creation for us lowly humans.

To verify what I say just take a look through the known universe. Do you see any other conscious creators? If you think you do then what have they created in the world of form?

This concept is an interesting thought, one hinted at by the masters but never fully explained. Man (or those in physical humanoid forms) as the point of conscious attention for God, does bear a great responsibility. Even though humans have been around in the universe for many ages we are just teenagers as a race relative to the life of the universe itself and we shall indeed go where no human, or any other life has gone before.

Isn’t this a much loftier thought than just blindly repeating what others have done? We shall emulate God and “do all things new.” The thrill of newness beats the hell out of repetition in my book any day. By the way, mindless repetition for the human kingdom is hell.