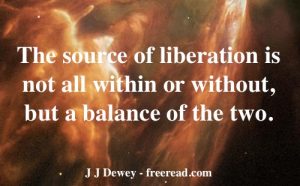 Question: Would you provide an authoritative reference to back up your teachings on energy in connection with sex?

JJ: I have taught hundreds of things here that cannot be proven by quoting an authority. In such cases the student must go to his own heart, mind, inner self and soul. If you have a problem with this then your problem will remain as long as you remain here. You would have also had a problem if you had been an original student of Alice A. Bailey.

Question: Your idea of seven cycles in each sex doesn’t sound right to me. What about karma, the rays and free will?

On the other hand, there are exceptions to all things and an intelligence who understands cycles and laws connected with them can move a thing out of its normal order if some higher purpose is involved. It is a general rule that we incarnate in cycles of seven, but there is always a time and place for the exception.

Karma is no problem as it always works within the Law of Cycles.

Question: What about a prearranged plan to meet a certain spouse and work off karma?

JJ: All this must work within the Law of Cyclic Activity or a higher purpose that works within a greater cycle.

Question: And what about all those past-life regressions of heterosexual people whom in their last incarnation were the opposite sex?

JJ: These are people who have adjusted to their new energy. H. P. Blavatsky was a male in her past life and had difficulty adjusting to feminine energy. However, she needed a female body to receive the teachings she presented to the world. She was an example of a disciple who went contrary to the Law of Lesser Cycles.

Question: What about the future evolution of humanity when the 6th and 7th Root Races will be physically androgynous – what happens to this supposed “cycle of lives” concerning the present opposite sexes?

JJ: In this case there will still be some polarization in male or female energy. This polarization will continue as long as there  is physical form. It will just not be as pronounced as it is now and the cycles will be of longer duration.

Reader: The theory of these seven cycles is extremely elementary and ignorantly simplistic.

JJ: Truth can always be reduced to the simplistic. Your complicated computer works on the simple principle of 0 and 1, plus and minus or male, female. These are called bits. If you wish to understand the complex computer you must start with the foundation of simplicity, not the complexity which cannot be understood.

Reader: The utilization of such a model of human psychology cannot be justified for the sake of simplicity, and is especially not justifiable if one is a student of Djwhal Khul. What the Master taught in 18 books is the ABC’s of the Ageless Wisdom and I fail to recognize the actual value of assigning a “charge” to an individual in relation to all that DK has taught.

JJ: There is nothing out of harmony with DK in that which I have taught, but agrees with his teaching of the Law of Cycles and the Law of Correspondences. Also you can see the energy working out in real life. Some definitely have a much more powerful attraction to the opposite sex than others. There are obviously many different degrees of attractive energy involved.

Reader: How does a person develop mental intelligence when they are told that John Wayne had a macho plus 10 charge? How does that do anything but promote mental lethargy?

JJ: I do not understand your question. What is to hinder one from developing mental intelligence no matter what your attractive energy is?

Reader: But for the sake of clarify, I will explain what I think and see as flaws.

Firstly, the scale – or I should say scales – plural. According to what you have taught, “the charge in the male varies between 1 to 10 and the female -1 to -10”,

Reader: but according to what I think – the male and the female are opposites of the same energy. In other words, male and female exist on one scale, in one spectrum.

They are one energy like the two poles of a magnet or the two wires in a cord that transmit one energy. Even so, they manifest as opposite polarities with differing effects.

Reader: There are differences in the spectrum, hence the polarities, but the spectrum is one. Now – I do presume you acknowledge this – but what you have taught is contrary and the teaching separates the energy into two spectrums or scales – the male and the female – when in reality, it is one energy expressed diversely.

JJ: All the diverse energies originated from the one that became the three, the seven and then the many. We live on planet earth, my friend where the one has become he many.

Reader: Therefore, I suggest that an individual (male or female) can be located anywhere in the one spectrum of diverse energy – a male can have a negative charge and a female can have a positive charge

JJ: This does not fit the Law of Correspondences. With a magnet or a wire, one pole is sending the other receiving.

Reader: This postulate is contrary to what you have taught, yet, it is very reasonable, especially when you have also said, “the physical body is not the dominating charge. The physical body we see has close to zero charge.”

Reader: It is far more logical to think the zero point is a perfect balance of masculine and feminine energy; and a person with this balance “truly combines within himself the two sexes” as Djwhal Khul has spoken and thus, two separated halves merge in their essential unity.

JJ: This is rare. Most of us are strongly influenced by our energy bodies and can receive balance and approach the zero point through right human relations and self control.

Reader: Yet, according your theory – all men have a positive charge and all woman have a negative charge, therefore, all men and woman, gay or straight, have some degree of attraction to each other – and this is certainly open to debate.

JJ: Yes, all men and all women (with rare exceptions) have an energy attraction to each other. The etheric body of the gay male will have a low natural attraction to the female, but influences and ancient habits often suppress this attraction so it is not noticed and if it is noticed it is not strong enough to cause action.

JJ: One in a male body will not have a charge of minus 5. If he did, his body would have organized into a female in the womb.

If they have a fabulous relationship it is because they are compatible in personality, understand each other and are close to the zero point as a unit.

Reader: However, if you disagree, could you at least explain how a person knows exactly what is their charge?

JJ: The best way to is to examine yourself, as to how attracted you are to the opposite sex in relation to other people. Since I have learned this principle I have done a lot of observation. For instance, I may be in a store with six other males in my vision and a beautiful magnetic female walks by. When this happens I study the reaction of the males around me. Of the six there will usually be two or three who do not seem to be affected. Then about half will notice and feel the pull. Usually one out of the six will have a real gleam in his eye. This is the male with a charge like myself. Sometimes I will give this male a look and he will give me a knowing look in return. This is probably the opposite of subtle gay communication.

Most people, just by observing themselves, can figure out approximately where they are on the scale. Just ask yourself, “how powerful is my attraction to the opposite sex in relation to others?”

This force changes very little with age. I am just as attracted to the opposite sex as I near sixty as I was when I was 18. It will continue when I am 90 because the polarity exists whether one is young and vital or old and physically weak.

My wife has a strong polarity in the opposite direction. Fortunately, we both have good self-control and balance each other out, so we are content.

Your observations on astrology sound good. You have a good mind that would be better served if you were more open to truth from those who run contrary to your thoughtform – such as myself. You seem to approach me as if I am always wrong. How about trying an experiment and approaching my writings as if they could be true? Even a stopped clock is right twice a day.

“When you encounter difficulties and contradictions, do not try to break them, but bend them with gentleness and time.” Saint Francis de Sales