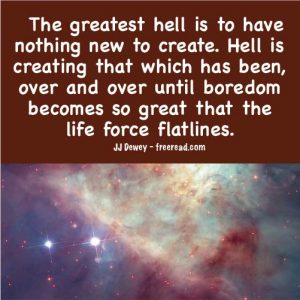 Reader: That’s quite a lot to think about. At first glance, I agree with it, and I have the feeling that this might be the most inspired thing JJ ever said, but having said that, it doesn’t seem to agree with some other things I have been taught at church and even things which I have read in Book III of The Immortal. Therefore, I would really appreciate some additional clarification.

This is what trips me up. In the class, a man in the audience asked whether mankind had had a similar evolution on previous planets, and that this whole process had gone on in the past and would continue in the future. JJ replied that this wasn’t true, and then stated the above maxim.

If this is true, what about beings who are more evolved than us, such as Sanat Kumara, and the Christ. Where and how did they evolve and take their initiations? I had always assumed that they were older souls had gone through the same steps which we are going through, only on other worlds.

JJ: Glad you asked for clarification in case others misunderstood.

I have stated numerous times that there are many advanced beings in the universe who have progressed on past planets and solar systems. These beings are now in a state of progression far beyond us.

The point I made was that when new systems and planets are created that there is not an exact duplication of the situation. God does “all things new” and each round creates a little more an advanced situation to deal with. Our situation in “overcoming all things” is a little different and more complex than was Sanat Kumara when he progressed through our stage.

The point made is that God does not like boredom and does not repeat himself exactly over and over, but the path for each individual is a little different and each new round of creation also has new and different ingredients added.

Another reader says: I enjoyed this post JJ and I much appreciate the amount of effort you put into trying to get across such concepts as ‘steps to learning and discovery’. It always helps to understand where you might be relative to others on the road to discovery and I definitely recognize myself as being at what you call ‘stage 3’ However you state at stage 4 that “For many who are below Stage 4 it will seem that truth is a relative thing.” I think this is inconsistent with your definition of stage 3, one who is logical and relies solely upon reason will certainty recognize that Truth is not relative, but rather a concept created to define that which correctly corresponds to reality.

My experience is that this process is a stage 3 discovery.

JJ: Notice my wording on this “For many who are below Stage 4 it will seem that truth is a relative thing.”

The “many” who are below Stage 4, who see truth as relative, are mostly the Stage 2, or the emotionally polarized. While it is true that some Stage 3s begin to see the absolute in truth that “truth is true and nothing else is true” (ACIM) there are many who do not understand this until Stage 4 is reached where the intuition is opened up.

The mental person is reasonable, but still subject to illusion and if his definition of truth is incorrect then many of the conclusions he derives about it will be warped making truth seem relative.

I keep getting posts wanting to talk about unknowable truth that cannot be known. I prefer to discuss things where knowing is possible. For instance:

Therefore both of these equations are true in reality.

I asked this question to our “truth is unknowable” reader:

If you could give us one of God’s truths perhaps you could make your point.

To this the reader responded:

Impossible. Thus my point that the intellect of man (in using necessarily limited and limiting words and ideas) cannot know or demonstrate or give truth, has been succinctly and experientially made.

JJ: Sigh. At last we have come to this point that we have arrived at dozens of times in the past when people of this fixed mindset come to the group.

For the benefit of the newer people, here is the process that keeps repeating itself.

An overzealous seeker believes he has discovered The One Way. This way is expressed in different words, but basically goes like this.

The universe is an illusion with no truth, and salvation can only be obtained by going beyond the illusion to a place which is given various names by these self-proclaimed enlightened ones.

Some of the names are:

Space between the dualities

Whatever this place is the common thread among all these people is this.

Nothing about this can be placed in words or understood by the mind. Yet each of these preachers has force fed us with attempts to influence our minds by putting this nothingness into words. The idea is always that we must become nothingness as they are so we can also have this deathly peace that they cannot explain or demonstrate.

Even though they cannot explain, demonstrate it or show the way, we are supposed to be enthused about it.

Let me add this. I have had many spiritual contacts in my life and they are all something and I can place them all into words that will shed at least some light on the mind of the seeker. If I discover a truth from the higher worlds I can tell you about it and have done so. The Molecular Relationship is one example.

We have covered this ground many times and the end is always the same. You cannot tell us any truth because you cannot place it into words or even define it or hint at it, and we are too low on the totem pole to understand. We also have no clue as to what real love is.

We listen to a few of your presentations because there is some variety in each new presenter, but now boring repetition is set in. Members can read the archives and see where the conversation would go from here if we were to continue.

We accept the fact that you want to escape the responsibility of mental thought and that you feel you cannot place the truth in words, but we do not want to accept the great repetition of being told over and over that we need to see and understand that which cannot be seen and understood.

We get the idea and wish to move on to truth that can register with mind, understanding and soul.

“What you don’t see with your eyes, don’t invent with your mouth.” Jewish Proverb