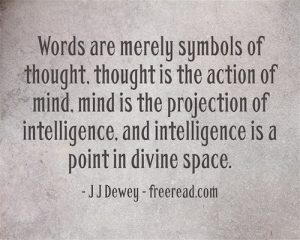 The Power of Symbols

In our discussion about the use of symbols to evoke spiritual phenomenon, good or ill, one of the Ten Commandments comes to mind. “Thou shalt not make unto thee any graven images…”

Aren’t symbols and the use of objects like crystals and wands graven images?

JJ: I see no contradiction not all objects are used as graven images. Some use wands, but keep in mind that both Moses and Aaron used rods. A rod certainly was not considered a graven image in the days of Moses, even though they probably had engravings on them.

The key scripture here is “Thou shalt not bow down thyself to them.”

The Ancient Israelites had many engraved images, especially in the temple such as lions, bulls etc. Moses himself even lifted up an engraved image of a serpent in the wilderness that caused those who looked thereon to live.

If we were to be completely literal with this we wouldn’t even have photographs or even coins.

The principle involved is does not negate art or engraving, but to substitute an outward image for the God within.

As I have written before, to have an outward image (whether it be a man or an engraved stone) that replaces God in the consciousness we then have the mark of the beast.

A symbol is a means of communicating, for even the words we speak are symbols. Such words either spoken or given in symbols can create many beneficial effects, even miracles if followed by the power of thought and faith.

Some early statues and paintings of Christ have him with a scepter or wand in his hand and indicate that he used it for healing. Mormon scriptures prophesy of a mighty and strong one with a “scepter of power in his hand.”

Legends tell us that Moses had a rod that amplified his natural energy.

One of the purposes of rods or wands is to charge them with energy so a person can join with it and immediately move his consciousness back into its spiritual center.

This was one of the purposes of the garment introduced by Joseph Smith as well as the meditation robes in the east. They should be worn when a person comes out of the noisy world and should have the effect of quickly raising the seekers vibration so he enters the spiritual state. Mormons who wear their garment all the time do not understand its purpose. This answers the question of why Joseph did not have his garment on when he was killed – he also did not wear it on many other occasions for he understood its purpose.

Question: Which are more powerful? Symbols we make up ourselves or symbols from other systems like Reiki?

JJ: Remember words are symbols conveying certain meanings as are more simplistic forms such as the Star of David. The difference is that words have meanings assigned to them and have different meanings in different countries and languages. A symbol in its purest form is a universal language that is understood the same way by those whose consciousness allows them to register. Certain Deva (angel) lives only communicate with symbols and can be called forth to assist humanity if they see symbols they understand.

You therefore create little effect by making up symbols. It would be like trying to make up French words. This would not help you to speak French. Instead, what you must do is learn the French language from a source who knows.

There are a number of schools of thought and institutions who teach some of the truth behind symbols. The Masons and the Rosicrucians are two that come to mind. DK elaborates on them from time to time. Contemplating the Law of Correspondences is also a good exercise in understanding, for that which is below is a symbol of that which shall be above.

Reader: I turn light off and on, I wash my hands over and over, I have to do someone exactly right or something bad will happen to me.

JJ: You’re talking more toward rituals and superstition rather than symbols. However, some rituals do have symbols incorporated within them.

Reader: I saw a faith healer on T.V. who brought out evil spirits in people and cured them of depression, anxiety and others. He said he do NOT use holy water or rituals or anything, he only tells the person to believe in Jesus and by the word and your demons are gone.

JJ: Many faith healers use hypnosis which has little to do with rituals or symbols.

Why use rituals? Why not just use the power of thought? Obviously Jesus saw the need to use them from time to time:

“And as Jesus passed by, he saw a man which was blind from his birth. And his disciples asked him, saying, Master, who did sin, this man, or his parents, that he was born blind?  Jesus answered, Neither hath this man sinned, nor his parents: but that the works of God should be made manifest in him. When he had thus spoken, he spat on the ground, and made clay of the spittle, and he anointed the eyes of the blind man with the clay, And said unto him, Go, wash in the pool of Siloam, (which is by interpretation, Sent.) He went his way therefore, and washed, and came seeing.” John 9:1-7

Now why didn’t Jesus just lay his hands on his head, use his thought or speak the word? Was there really any healing power in the clay or in the pool of Siloam? Or was Jesus using the power of symbols to create a miracle? Did these symbols call forth the healing Devas who restored the man’s sight?

Real truth is found in symbols just as it is found in the words of a book or of a wise man.

Reader: Should I use the same method JJ used to defeat his dweller? Not ignore, but put aside the OCD thoughts and keep one’s mind on whatever you doing?

JJ: The discipline would probably help.

Reader: My Dad was angry all the time it seemed. If letting out your feelings keeps you well how come it did not cure his mental illness? He let out so many feelings that he should have been cured. Maybe he should have suppressed his feelings for he was abusive.

JJ: Two of the main things that cause disease are suppression and its opposite which is excessive release of emotion which cause disease of congestion and inflammation. It sounds like your dad was too inflammatory, but looks can be deceptive. Some abusive people with bad tempers are still suppressing and not letting out their true feelings.

You ask about the OM and AUM.

It is the OM which is a destroying sound and the A-U-M which is the building one. The OM can be used to destroy all that stands in the way of Spirit and the A-U-M builds in form that which fulfils Purpose.

Reader: If we are not supposed to know about rebirth because we may waste a life knowing we will get yet another chance (says JJ) then why did Buddha teach it or why do Buddha monks believe in it?

JJ: Teaching about reincarnation does not bring back your memory, which could cause interference in the current life. All truth is good to know when we are ready to receive it and when you are ready you can be give past life memories.

Reader: How do  accurate psychics get their information?

JJ: If you want to see how accurate Psychics are, retrieve an old issue of the National Enquirer and read their predictions. I have done this several times and usually not a single prediction came true.

There are very few accurate psychics. Some of the ones with real ability catch a glimpse of the Akashic records but catch glimpses of unrelated items that are inaccurately interpreted. The most impressive psychics will pick up your thoughts and give you advice related to them. It takes an advanced soul to use extra sensory powers with accuracy and wisdom.

Reader: Christ met his dweller in the wilderness. He seemed to brush the dweller off without much effort.

JJ: Actually, we do not have the full story. It was much more difficult than the Bible relates.

Reader: Didn’t he meet is dweller in the garden before the crucifixion.

JJ: He met his personal; Dweller in the wilderness, but met the planetary Dweller, a more formidable foe, in the garden. Judas caused Jesus a major problem, but the Dweller was another matter unrelated to Judas.