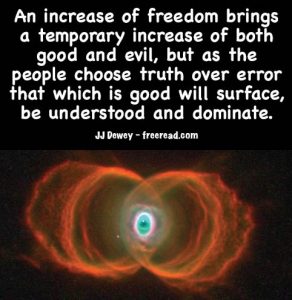 A reader was concerned about the declining morality in society and asked my opinion on an article headlined as:

JJ: I read the article. It looks like Las Vegas is again placing more emphasis on adult entertainment similar to the way it used to be.

This does not concern me a hundredth as much as many other problems going on in the world. I’m just glad that I still live in a country free enough to have a Las Vegas. Do you think a Las Vegas could ever surface in Iran, Cuba or North Korea? Not hardly. Wherein lies the greater sin?

The greater sin always lies where freedom is strangled and violence on the innocent is threatened.

When we have freedom, we will always have to deal with groups who have lifestyles and approaches alien to our own. The best thing to do is let them have their space and make our own space in a place of our choosing.

One might take note that Jesus voiced much more concern about ignorance and hypocrisy than he did any interest the people had in sex. In fact, he never condemned the prostitutes and sinners. All are aware of him saving the prostitute with the famous phrase “He who is without sin, let him cast the first stone.”

To those who would not listen to the truth he said: “It shall be more tolerable for the land of Sodom and Gomorrah in the day of judgment, than for that city.” Matt 10:15

Whatever the sins of Sodom and Gomorrah it did not seem to bother him as much as the ignorance he faced.

The only specific reason that God said he destroyed the earth in the days of Noah was the “violence” that was prevalent. (Gen 6:13)

If I have one neighbor who goes to see some scantily clad ladies perform in Las Vegas and another doing violence to his wife and kids I will be much more concerned about the abuser who in inflicting real pain upon the innocent than the guy just trying to have a good time.

JJ: You are correct that lasciviousness, or lack of self control in any area of life, leads to many problems that must be solved, but its opposite is even worse.

Consider this. Hitler did not drink or smoke and was a vegetarian, strict about his diet. He was always preaching about morality to his associates and would not have allowed a Las Vegas to develop. Many other dictators are also very strict about controlling lasciviousness such as presently in Iran or the Taliban in Afghanistan.

In the real world about half or more of the population would like to go to Las Vegas and let loose a bit and there is not a lot we can do to change this without creating the greater evil of restricting freedom.

It is the duty of the lights of the world to teach freedom first and then in that atmosphere of freedom to teach the people to head toward the path of righteousness or right-use of energy.

Let us pick four instances in the Bible where God caused destruction.

(1) Sodom and Gomorrah There is very little said about why these people deserved destruction except the example of where the crowd wanted to rape the angels, who they thought were good looking men.

Now rape is a sin of violence rather than one of sexual pleasure.

(2) The Great Flood. Again the only reason given for God’s wrath is “violence.”

(3) The destruction of Jerusalem in the days of Jeremiah. Did this destruction come because they were licentious? It doesn’t sound like it. Listen to the words of Laman and Lemuel: “And we know that the people who were in the land of Jerusalem were a righteous people; for they kept the statutes and judgments of the Lord, and all his commandments, according to the law of Moses; wherefore, we know that they are a righteous people; and our father hath judged them…” I Nephi 17:22

This is an interesting observation from these two wayward brothers. From their point of view, the people in Jerusalem kept all the commandments – which implies they were probably pretty strict about sexual purity.

Why then did destruction come upon them?

Two major reasons were given. Unbelief and violence. They did not believe the messages delivered through the Holy Spirit and sought to destroy the messengers of light.

(4) The generation of the Jews after the crucifixion. Was God mad at them because of licentiousness?

That did not seem to be the problem as they were adamant about stoning or punishing sexual offenders in the days of Jesus.

Again, their problem was violence and unbelief. They Crucified Jesus and sought to kill the apostles. Jesus also faulted them for refusing to listen to the message of the gathering.

Now, what do we see from many fundamentalists in this age? Their main point of emphasis is on sexual misbehavior which has not been a reason for destruction in the past. The problem that brings a people ripe for destruction has always been the same: A refusal to listen to messages of light and correction and violence which causes people to be afraid to express themselves.

Mastery of sexual energies is, of course, important, but those who are far from mastery will be with us for a long time to come and teachers will fight a no-win war if they seek to solve the whole problem in the immediate future.

If we took any religious leader and destroyed all his enemies we would find that most of the “righteous” who were left over still would not have much better control over their sexual energies than those who were destroyed.

However, almost all people know within themselves that violence and suppression of freedom is not right and if they hypocritically go against this understanding they go against their own souls and if the majority supports such violence, then such a people is in danger of destruction.

There has been quite a bit of talk about what is right and wrong about charging for spiritual work including the quoting of some of my past teachings. Let me add several comments.

One approach by many is to encourage donations rather than charging a fee.

But when you think of, it is there any difference between making a donation because you like something and making a free will purchase because you also like a thing?

Not much. In both cases you are paying for something of value. And for the Biblical tithe demanded of some churches you could purchase a lot of books and courses for the same amount.

My own philosophy is illustrated by my actions. I have taught this group here on the web for free since 1998, writing thousands of articles making them available to all without charge. We have had five gatherings that we have just charged enough to pay for the overhead. In addition, we pay our own transportation and most motel bills. Finally, I have made the audio available on the web without charge.

It wouldn’t be against my philosophy to charge for future seminars or teaching, but it wouldn’t be done with the motivation of gaining personal benefit, but to free my hands for service, pay essential bills and promote the teachings.

When we produce a hard copy such as a book or CD we have to charge as it is impractical to give large numbers of these out for free. We have given out many thousands of copies of Book One of The Immortal in economical print for free, however, and to sincere seekers who cannot afford the other books we are willing to either discount or give the books out with no charge.

Even though I charge for my books, I have lost a lot more money than I have gained by doing this work for it has taken a lot of attention away from my regular business making it impossible to expand it.

Overall, the overriding principle I attempt to go by is this. That which I have received from God should be made available to all, both rich and poor. No one should be denied a teaching or principle because they have no money and I will always attempt to make all that can be acquired by the rich available to the poor who have willing hearts.

“I expect nothing. I fear no one. I am free.” Nikos Kazantzakis