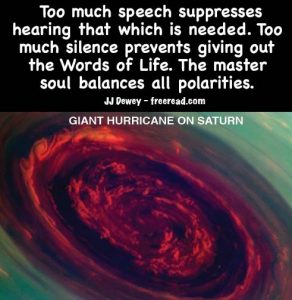 Question: Truth CAN be placed into words, but doesn’t it also lose some of its full meaning in the process of being stepped down?

JJ: Words on the physical plane are a symbol of points of truth and because these symbols are communicated in imperfect circumstances the understanding of them is also imperfect.

But keep in mind that each word is represented in the higher planes. Those who are in touch with the soul can read the scriptures and sense the words, not only on the physical plane but on a number of planes and obtain a pure understanding of the word, or words.

Those who are not in touch with the soul or even higher mind, will interpret the words like a computer program would and not receive a full understanding.

Question: Wouldn’t the person who receives the words, then have to contemplate them, receive their own soul confirmation, which then helps them recreate or duplicate that same original truth within themselves?

To illustrate this, let us use the example of a song again, such as Yesterday.

See the whole melody as one word. When this word descends to the physical plane it is represented by vibration of physical matter and can be arranged in many different ways with a variety of lyrics.

Now, does this song, or word, cease to exist when it is not vibrating on the physical plane?

The answer is no. It continues to exist on the plane of the mind and higher even when it is not being played. This word is still in existence in a pure form even when there is not a physical vibration or symbol.

To understand the pure idea behind the song one must listen to the physical word and then reflect on the higher realms until you see the song as Paul McCartney did when he first received it. But the chance of doing this without the aid of the physical word is remote. This is why we need to be stimulated with physical plane words and ideas and then trace them back to the soul for full understanding.

“This is also why the final authority for the disciple is not a physical human, but the soul.

Purusha: Thank you for your warm welcome. And I, in return, thank you, as one Ishaya to another, (an Ishaya being merely one who has dedicated their life to the healing of humanity) for your work in bringing forth the Truth. I will soon be leaving to teach for an extended period in Asia. The wisdom you brought forth in the The Lost Key of the Buddha I know will be invaluable to me there.

JJ: I am honored you find it helpful.

As I said, we have had several Ishayas on the list in the past. They have always been gentle souls, but not always attracted to the logic presented here.

I understand that you do not wish to spar with me and I will seek union rather than separation as a whole.

It seems we both agree that we must go higher than mind, but where we disagree seems to be in the use of mind after soul contact is reached.

“Where it is a duty to worship the sun it is pretty sure to be a crime to examine the laws of heat.” John Morley

The Mind as a Step

I never received a definition of truth from our previous reader

Again, I ask, would you share with us your definition of truth so we can get a better idea of what you are attempting to communicate? While you are at it give us two examples of truth.

Until we get at least a vague idea of what you mean here it appears senseless to argue with you.

To those of you who feel a strong urge and have a sense of personal mission to convince us that your perspective of the mind is correct let me say this.

Most of the people in this group value mind and common sense even though we realize that there are realms above mind that must be contacted. When contacted, the enlightenment received will be logical.

DK, who most of us respect, said this about the Masters of Wisdom in relation to his teachings:

“If the information given raises the aspiration and the will-to-serve from the plane of the emotions to that of the mind (the plane whereon the Masters can be found) then they will have served their purpose. If the teaching conveyed calls forth a response from the illumined mind of the worker in the world, and brings a flashing forth of his intuition, then let that teaching be accepted.”

We respect mind, logic and reasoning here. Dozens have come and gone over the years attempting with great perseverance and ferocity to convince us to drop the use of the mind, but since none of them have any logic behind their words, or offer a path to soul confirmation of such, they have left without converts.

One of the purposes of this teaching and this forum is to teach the value of mind. If some are only hanging on to make converts in the opposite direction of the purpose of this group then I would suggest this is a counter productive and a useless effort as well as a possible infringement on free will.

We invite all to stay who feel the mind, logic reasoning and common sense has value. If someone wants to make an effort to convince us that the use of logic is not logical we will entertain such sophistry with mild amusement for a limited time but then we must get back to the purpose of the group which sees all planes as steps on a ladder which, if missed, could cause a fall back to the beginning of the climb.

As far as the Biblical teaching of perfection goes, I have written a lot on the subject. Rather than repeat myself readers can go to Google and place this in the search box:

This will bring you up numerous articles dealing with it.

If you read these and still have questions feel free to ask.

If some enterprising reader compiles the best of these into one collection this may also be helpful.

“We desire nothing so much as what we ought not to have.” Publilius Syrus (~100 BC), Maxims