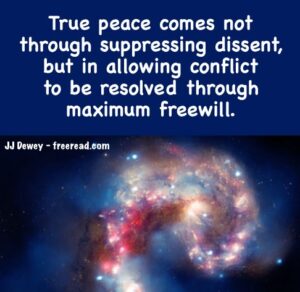 Bill turned off the TV and sat back in his chair. He had just finished watching the news on Christmas Eve and was pretty frustrated. This was supposed to be the season where we celebrate the birth of the Prince of Peace and messenger of love, but all around him he saw no evidence of peace or love. In the past 24 hours through television and the internet he witnessed tremendous suffering and destruction through war, gang murders, drugs, the virus along with lots of political conflict.

Rather than give a prayer of thanks this season Bill felt more like telling God off for not making this world a better place. It seemed to him that God was not doing his job and just letting chaos reign. Then the more he thought about it the more he sided with the idea that there must not even be anyone up there extending a hand to help us out.

He had enough, He looked to the skies and raised his fist and shouted: “All right God; I’ve had enough. You’re either not there or you just don’t care. The world is going to hell and the only thing your Son can be prince of here is chaos. What do you have to say for yourself?”

Bill stared upward in a moment of silence and then said with a perverse satisfaction: “I thought so. You are saying and doing nothing.” Then he shouted at the top of his lungs, “Do you hear that NOTHING! You are a nothing God!”

Bill slouched back in his chair and wept. It was as if he had lost all hope in the world as well as God. He had never felt such despair.

He just sat still for a couple moments soaking in his thoughts when at the core of his being he felt something. It seemed familiar though he was sure he had never felt it in his mortal life. He paid attention. It was some type of living vibration that seemed to bring a sense of peace that was increasing.

“What is this?” thought Bill. “In the midst of my turmoil I feel a great inner peace like I have never felt before.” He couldn’t resist putting his attention on it, and as he did he registered a clear communication.

“Focus on the peace that never fails.”

On hearing this he increased his focus and the peace increased beyond anything had felt before.

Next, he registered these words: “Take my hand.”

“Hand? What hand?” he thought.

He then looked upward and saw a cloud of light. He had the feeling that he was supposed to reach into the cloud. He did so and felt a strong grip take hold of him, which seemed to pull him right out of his body into the cloud.

“What is this place?” Bill exclaimed.

“This is the earth a thousand years from now,” came the response.

“I am that Prince of Peace that you were cursing.”

So, you are real after all? Then why do we have to wait a thousand years? Can’t you just use your powers to end suffering on earth now?

Humanity can receive guidance but freewill must be maintained or the peace and happiness you see about you cannot exist. The only way for even God to solve the problems of humanity is to take away free will and force you to do good.”

“That may not be such a bad idea,” Bill mused.

“In this vast universe every possible solution has been tried. Let us visit a planet where strong leaders took away free will in an attempt to force people to behave correctly.

Immediately, they ascended and appeared on another planet. Bill again found that he could see far distances in all directions. He saw that on this planet here were no wars and conflict was not allowed, but the people seemed depressed and the very life force of the land seemed low and lacking color.

The Prince spoke, “These people have no free will over major decisions and have not yet had the joy of overcoming and mastering their problems. All solutions seem to come from outside themselves causing them to feel as if they are drifting in a void. Come, let us visit another place.”

Again they were taken to another planet, but this one was even more beautiful than the future earth. Bill saw perfection that was beyond anything he had imagined and the people had almost godlike powers. If they needed to travel a thousand miles they could just think themselves there and everyone communicated with an advanced telepathy where misunderstanding was impossible.

“What a terrific place,” said Bill.

“But it was not always so,” said the Prince. In their early days they had terrible conflicts that make your present conflicts seem mild. But they endured and became masters of the situation and solved their problems. These efforts through free will opened the door to the joyful living experience they now have. The previous civilization we visited is about the same age but the tight controls limited their progress. Which would you prefer for results; the previous world or this one?

“This one, of course,” said Bill. “I see now that the struggle and solving our own problems may be a necessary step if real progression is to be obtained.

“Yes,” came the reply. “Consider the lesson of the caterpillar. If we try and help it break free from its cocoon it will die. It needs the struggle to gain the strength to turn into a beautiful butterfly. Even so, humanity has its problems, but they need the struggle to transform the earth and its people into a place of wonderful existence. I’ve shown you these things to give you hope that you can share with others. You can make a much greater difference than you realize, so go forth my friend and do your part.”

Immediately, Bill was back in his body, sitting in his chair. He still felt a residual peace from the experience. He now saw that all his doubt and complaining just added to earth’s problems and he made the determination that from this point on he was going to do his part to make the world a better place. It wouldn’t be easy but that view of the earth 1000 years from now gave him the faith he needed.