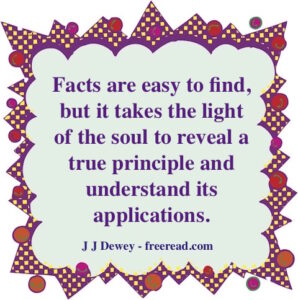 I received an interesting letter from a prison inmate that I send the teachings to. He has read all the archives except for the most recent installments that I have not sent to him yet.

He has put together an educational program (drawing deeply from my teachings) for the prisoners that has attracted the attention of the National Director of Prisons. If his ideas are accepted, they could be used on a national basis.

He has just written me and asked for my assistance. He wants me to briefly list and describe the 60 most important principles or teachings in my writings.

The only way I would have time to do this is to make the project part of my postings to the Keys. I will also ask for your help. If there is a principle or teaching that I have taught that you think is particularly good or inspiring post it to the group for possible inclusion.

We’ll start with the idea of principles themselves. Here are a few things I have edited from the archives.

Principles: What a principle is.

For instance, the Constitution of the United States is built around the principle of the Free Agency of man. Around this principle has sprung the Constitution and thousands of books containing millions of facts. In the days of the foundation of this country there was only a handful of enlightened people who were able to understand the principle of freedom. People of a lower order could not see it. There was no way that King George from England could teach or enlighten George Washington in any degree on this principle even though he probably had as many facts in his head on the subject as Washington did. On the other hand, Washington could have done much to enlighten the King if he was willing to listen.

A principle is that which demonstrates the intelligence of God and makes things in the universe work toward a dominating good.

A law is a description of the working of a principle, or principles. By law I am referring to universal laws and not manmade rules.

If the law is accurately described then the perfection of God is made manifest because such a description shows the consistency of the principle and allows us to predict the future actions of the mind of God in the universe.

All the laws we have concerning gravity are produced by observing and describing this principle in action.

Within our souls is the capability of recognizing whether or not a thing is true. When a principle is spoken, you’ll feel within yourself the vibration of certain chords that ring true.

True principles are always in effect all around us. The universe is built upon true principles, held together by them and will be dissolved by them. True principles govern our lives, our deaths, our relationships, our sorrow and our joys.

The bird flies making use of true principles, yet does not understand the principle of flight or realizes it exists. So it is with us. We live in a sea of principles, which governs all things, yet until we touch the soul we do not even realize what a principle is.

Many of the best authors touch upon a principle. Some have a sense of that which they have discovered, while others do not discern them from facts. Sometimes you can find a principle in a book written by an author that does not know what a principle is.

Take the principle of cause and effect. Was there ever a time that it did not work? Cause and effect has always been here and always will.

If there is no beginning there will be no end.

No one created this; it just exists past, present and future. Take a look at any true principle and you will see it had no creation, but just always is and always works and cannot be destroyed.

I think that truth, as a principle, is so abstract, that it needs its own “vehicle” in order to manifest. So, we have to speak of “knowledge of the truth” or “the light of truth”. When the light of truth is thrown on a conflict (illusion versus illusion), the illusion is swept away and the conflict vanishes.

A principle is an enunciation of what is. A principle isn’t made. A principle is eternal and it always is. Like Newton said, for every action there is an equal and opposite reaction. He discovered a principle. From that he was able to deduce a multitude of truths.

The important work of moving the world forward does not wait to be done by perfect men. George Eliot (1819 – 1880)

(NOTE: From this idea evolved a soon to be published book I have written called 101 Principles. You can find most of it at this link: