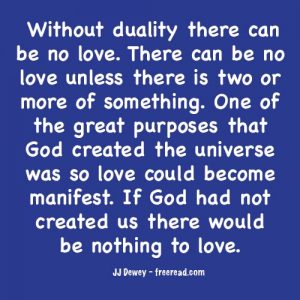 here are many today who encourage us to find a world which is beyond duality or has no duality.

If there was such a world there would be no

Is there really such a thing as being free from duality?

Jesus said: “In my Father’s house there are many mansions.”

We indeed experience heaven and hell right here on the earth, but because of the “dominating good” that governs the universe the hells will lessen in their intensity and the heavens will increase until the end of this great creative cycle and then we shall devise a new heaven and new hell to keep things exciting.

Think of it. If you were going to create a game that all would enjoy playing would you make one with no pitfalls – where every throw of the dice moves everyone one ahead the same amount and all arrive at the finish at the same time? Monopoly is such a universally accepted game of fun because it has some of the greatest pitfalls you can imagine. Who has not got upset when landing on a motel at Park Place? But do we quit and cease playing? No we come back for more, for sooner or later you are the one who owns the motel at Park Place. Sooner or later you pass Go and collect $200.

Then after you play the game over and over enough times you may tire of it and retire from playing and, after a rest, search for a new and more challenging game such as Chess.

Some express amazement that we could state that Love and Light were the first manifested duality. One objection is that many have the belief that pure light and love are beyond duality. There is also the belief that love has no opposite. Fear they say is not the opposite of love because fear has its roots in illusion and love is in the real.

The truth is that Love is a higher reality than fear, but not the ultimate reality and it is true that fear is not its opposite, but nevertheless, Love does have an opposite and that opposite is Light.

There are levels of reality and each level up brings us closer to the real. Just as there was a more real world above the dream state in the Matrix even so is there a higher reality above the state we are in now and that reality is more real than the present one.

There are three realities of which most of us are conscious.

For instance fear can exist in both states, but continuity of events and form only exist in the waking state.

The question is – how then are Light and Love opposites?

To understand we must define them.

What is Light? Light is that which is radiant, scatters photons and reveals truth. Look up at the night time sky and pick a twinkling star trillions of miles away. There it is radiating light to the entire universe revealing the truth of itself to all who have eyes to see.

What is Love? Love is the opposite of radiation which sends forth. Love is magnetism which pulls together. When you love someone you are magnetically drawn to them.

Thus light is that radiance which divides the one into the many and love is that magnetic force which pulls the many back into the One. They are very much opposite and these two dualities are at the basis of creation of all there is that can be seen (light) or felt (love).

The only thing which is truly beyond illusion is the third great energy of Purpose from whence Love and Light owe their origination. But even Purpose is not “that which is not,” but that which is not understood.