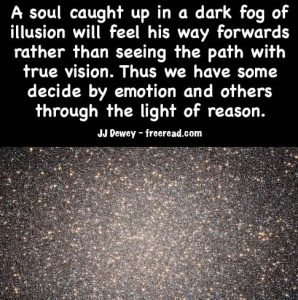 Barriers to the soul

We let down our inhibitions?

JJ: Not so much inhibitions as barriers. What produces a barrier?

JJ: Judgment in the negative sense.

JJ: Beliefs. Programming is a good one. What else?

JJ: That could go under judgment.

JJ: Okay. That’s a good one. Wrong focus of attention. The main thing we have done differently that’s brought us a little closer to the spiritual center is that we shifted our focus of attention. We’re still the same group of people but we focused our attention higher. We began with our attention focused our surroundings but we then moved our focus onto the spirit. We came here with all our attention on the material but what we’re trying to do is to bring our attention to be focused in the center of spirit. When we do this we remove the barriers or at least temporarily take them down. We may go back to putting our focus on our daily problems afterwards, but focusing attention is a good one.

Programming. Programming is what creates illusion. There are three things or layers of interference between us and the spirit. One is maya which is the pull of matter, which is the pull of the personality using desire energy to pull the focus away from spirit into matter. Not that all of these energies aren’t good. All energies are neither good nor evil. It depends on how they are used but when we let the actual pull from matter control us then this is the power of maya. It pulls us away from spirit into matter and we must overcome that pull. This is what the ancients said when they said to develop control to overcome the pull of desire to overcome maya.

For instance, the Ten Commandments were given through the spiritual hierarchy for this purpose of helping us to control this pull of matter over spirit. As mankind progresses we’ll have other things to overcome. Basically the first step is to control physical body instead of allowing it to control you. You control your lower passions instead of your lower passions controlling you. You also get control over the physical body though following a reasonable diet so you have good health. You exercise and take good care of your body so you control the body instead of it controlling you. All this is part of controlling the pull of matter over spirit. By reversing that pull it takes you through this first rung that you have to go through as you approach the spirit. Actually almost any of us can reach the spiritual center to a degree. By focus we can take a group like this and if you’re willing, the group can be taken over these rungs into the center for a period of time.

An example is when Christ was on the earth and people were healed. These were ordinary people but for a moment when Christ looked upon them and saw perfection within them for this one moment these two rungs disappeared and they went into this spiritual center. Their bodies were healed then later these rungs came right back again.

It surprised the person being healed as these three rings of maya, glamour and illusion disappeared and for an instant while he communed with God within his person. Then the person realizes that what was being manifested wasn’t through something out there but it was himself and what lies within him.

So as it was being manifested these three layers of illusion can be overlooked and there can be miracles. But in normal circumstances, even if you create a miracle, it’s temporary and you go back to the former state of consciousness. The first step in discipleship is to get control of our physical world so you control your physical body and physical world. The basic passions are controlled then the first layer between you and the soul disappears. What’s the second barrier?

JJ: The second barrier is the emotions and it’s called the astral. The astral world is similar to the physical world but we can’t see it with our physical eyes but we have an astral body that’s incorporated within our physical. It’s responsible for the auras that you see. The astral body or the astral world is a reflection so you look in it and see a reflection of yourself. You don’t quite see your real self because it’s reversed. When you contact the astral world, the astral impressions are seen totally reversed or upside down. So you’re not really seeing the real truth but the reflection is close enough to the real truth that we’re tricked. Because we are tricked we aren’t really capable of being at the spiritual center when we are seeing things upside down. What is the biggest hurdle in overcoming the astral world? Who is the king of the astral world?

JJ: Ego. He’s the god of this world, so to speak. He is the god of the astral world. He replaces the god within. He’s close enough to being a real god that he tricks us into thinking that he is God. The ego wants to be magnified. The ego tries to be one with us. This produces a second layer which is called glamour. The ego feeds on the energy of glamour. Do you know what a glamour is?

There are many different glamours. You overcome one then there’s another layer still. There are even glamours associated with people upon the path. Some people on the path may think they are near the end of the path but because of glamour where they think they are is far ahead of reality. Maybe he’s reached a point where he discovers a little bit of light and because of glamour he thinks he’s much further along. This is a problem with many people as they’re approaching the path or approaching discipleship. They’re at a beginning point, but they think they are at the ending point of the Path.

There is also the opposite glamour where the person downgrades his point in evolution. “I’m just nobody. I’m way back at the beginning yet.” This is a glamour too. It’s kind of a reverse glamour. As you get rid of all your glamours the question to ask yourself is, “Where am I really? I don’t care if I’m higher or lower. I just want to know where I really am.” This is the person with no glamour. He sincerely wants to know that about himself. It doesn’t matter if he’s high or low, he just wants to know where he is because when you know where you are, then you can take your next step on the ladder. If you don’t know where you are on the ladder, taking your next step can difficult

Audience: So my question is how do I know? If I don’t know where I am, how will I know where the ladder is? How do I find it? It’s not like a goal to get to.

So, these glamours interfere with seeing ourselves correctly. They interfere with our reality of seeing our place upon the path. One of my favorite quotes from the Tibetan reads, “True humility consists of seeing our place upon the path and acting accordingly.” We always need to look at our place upon the path with humility. That’s important. It’s not true humility to put yourself down or act like you’re the head honcho of the universe but to find where we are and act accordingly. If you don’t know where you are it’s best to figure ou are a little lower instead of a little ahead. That way it won’t be embarrassing when you find out where you really are.

This astral world is important to understand. The ego feeds off this glamour and this feeling of self-importance is indeed a hindrance that we want to avoid. Glamour can affect a group such as this if we think, “We’re really special. We’re the best. We’ve got an important purpose.” When we think that way it’s feeding our glamour. The best way to look at it is, “I’ve taken what I can, I’ll give what I can, I serve the best I’m able.” That’s about the best anyone can do. When we approach discipleship with the glamour of being an important disciple, this feeds the glamour and keeps us from entering this spiritual center.

Audience: Is this layer the hardest? It sounds pretty hard to get past it.

JJ: It’s probably one of the most problematic. All three of them are actually quite difficult. In the first initiation you pass through the first barrier. The masters have a set of initiations and as people begin to overcome certain things then it gets the attention of the brotherhood. They actually tune in into the disciples who are undergoing these steps through the three illusions. The second one is very difficult because dealing with the emotional body is so tricky because everything is upside down.

Audience: Is it possible to work on more than one thing at a time? Could you be working on a glamour problem while you’re still working on the physical areas?

Yes, you can be working on all three. You’ll pass through the first one first though. But when this is overcome you might be 40% through the astral part and maybe 20% through the illusion part. The disciple will be struggling with all three to some degree. The three temptations of Christ are symbolic of these three. In the first one, maya tempted Him to turn the stones into bread. This is symbolic of the attraction of matter. In the second one He was told to throw Himself off of the temple. By throwing Himself off the top of the tower He would be able to demonstrate that He was the Son of God because He could fall a great distance and not get hurt. That was to appeal to His ego and prove who He was. An ego trip. He had to let the ego go completely in order to know who He was. Miracles followed Him even though He didn’t directly ask for them or receive them for himself they did come. Then the third one was where he was promised the world. This was illusion. The illusion was that all the kingdoms of the world wouldn’t amount to anything if the kingdoms of the spirit and soul were not obtained. Illusion was the third temptation.