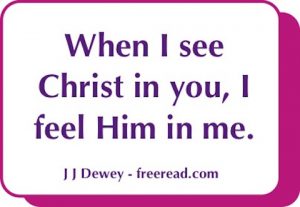 The Master sat in the great council and spoke. “What think ye of humankind – have they made any progress in the last year? How many have found the pure Christ presence within the core of their being? Is goodwill finally beginning to permeate the hearts of mankind?

One spoke up, “As you know the planet is suffering through turbulent times with great discord. The prophecy of goodwill and peace on earth seems to be far distant; whereas your prediction of brother against brother seems to be dominating.”

“Yes, the tension has been building for some time but this is a necessary step the sons and daughters must take to open their eyes and see the new world. You, my friends, have been searching for the pure in heart. Are there enough to swing the balance to peace and goodwill?”

Another spoke, “There has been an increase of both love and hate. Unfortunately, hate has been much more visible than love though love is increasing and flows powerfully beneath the surface of what is visible to the masses.”

I will go check the pulse of the people this Christmas season when their thoughts are more giving than usual.

The Master looked down upon the world and saw many points of dark and light in the hearts of the people. He decided to visit one in darkness first.

He observed a young man watching a political discussion on the television. He agreed with one commentator and hated the other. “Why can’t that stupid jerk see how wrong he is?” he asked himself And why can’t my parents see the truth? “Why are they on the side of hate?” he thought as he nurtured his own hateful thoughts.

Then the phone rang. It was his father wishing him a Merry Christmas. Then he grudgingly sent back greetings, but the father could feel a lack of love in his voice and ended the call with, “I love you son.” He then handed the phone to his wife and she also expressed her love as only a mother can.

His heart had been so disturbed by his political differences that he had difficulty returning the love, but at that instant the Master looked at the energies of his heart and saw dark clouds hiding the love that abides in the center. His thoughts penetrated that darkness and reached the core of his being.

His heart was touched and a stream of memories flooded his mind with all the loving acts his parents had done for him over the years. As his mind and heart returned to capture the feeling of those happy times he started to weep.

His mother was concerned and asked if anything was wrong.

“Why can’t things be the way they used to be where we loved each other and agreed on things?”

“Our love for you is greater than politics,” said his mother. We can have more love, not less, if we just look at the best in each other.”

Thanks Mom. Our political differences have made me feel distant lately but I just had a surge of good memories come back that reminded me of what great parents you are. I love you both and this time I really mean it.”

The master was pleased that this young man could he reached and moved on.

Next, he observed a young lady who was obsessed with social media. She had little physical contact because of the large amount of time online and this caused her much distress. She observed all the happy pictures posted by others and felt that everyone seemed to be having a better time than herself. Then when she did post anything that wasn’t positive she felt others reacted with bullying comments. This created a vicious circle of attack from both sides.

Her negativity had progressed beyond the point of reason and she was thinking of taking a bottle of pills and ending her grief.

The Master tuned into her thoughts and the heart of her sister who was in a positive state and linked the two hearts. The older sister then thought of the younger and felt a cry for help. She made a call, wished her a Merry Christmas and shared her love. She then reminded her of the good times they had when younger and these pleasant thoughts revived her spirit and she decided to embrace life again, feeling that life would get better.

The Master then raised his consciousness to embrace the earth and viewed all the hate and love, the positive and negative, the good and the bad. He saw the homeless and the destitute, the rich and the prosperous. He saw many sacrificing themselves to help others yet many holding back thinking only of themselves. He saw many consumed with rage and hate and others filled with love.

As he raised his consciousness further he saw many points of darkness, but they were gradually being pushed back by points of light coming from loving hearts. Indeed the darkness seemed overwhelming, but it had reached the height of its power.

The Master sat again before the council and spoke: “The point of tension is great indeed, but the hearts of all but the most hardened of souls can still be reached with love. The spirit of light and love is increasing and will not be extinguished. Let us continue to encourage humankind to take the better path and we will assess them again in the year to come. The will of the Most High will surely come to pass, but because of free will the only unknown factor is the time involved.

“What shall be the keynote of our focus?” was asked.

“We need to remind those imprisoned by negativity to look back on their lives as did the two souls I visited, and review the pleasant memories where love was shared. This will nourish the love of Christ that is eternally at the core of their being and cause it to manifest anew.”

“May it be so,” said the group as one voice.