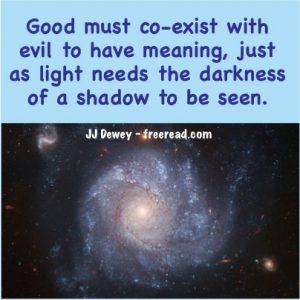 Perhaps we seekers have a kinder and gentler view of evil than the many hard liners, but as humanity as well as the Masters define the term, both good and evil exist.

Now let us move on to Paul’s third evil that can pull the disciple backwards in his evolution and service.

(3) Rulers of the darkness of this world.

It is always helpful to example Biblical phrases in the ancient languages.

Rulers comes from KOSMOKRATOR. This Greek word is derived from two other words. The first is KOSMOS which is often translated as world, but more closely corresponds to what we currently call “the system.” It literally means the “current arrangement of things.” The second word is KRATEO which basically means “to seize with power.

The word “rulers” is a bare bones translation that does not give the full implication.

A more correct translation would read: “Those who seize power and control the way things are.” “The power brokers within the system” could be another rendering.

Darkness comes from SKOTOS which can indeed mean darkness, but also can be translated as “shadow” or “obscurity.”

“World” is mistranslated from AION which means “an age.” The English word eon comes from this.

Taking this into consideration let us give a more accurate wording of the verse. Instead of reading:

“Rulers of the darkness of this world,” it could more accurately read:

“Those who size seize the power of this age and work in the shadows.”

So who are these people that send out a frustrating negative force to the workers of light?

In our age some would call these power brokers “the conspiracy.”

Even though there is no unified agreement on how sinister, powerful or unified the conspiracy is, there is one thing most will agree upon and that is that there are definitely people of selfish intent working behind the scenes pulling strings to manipulate events toward their own ends to the detriment of the whole.

It does seem that every time a good work or a good worker comes forward to change the world for the better that some power comes out of the shadows to do everything in its power to stop them. In our time John and Robert Kennedy and Martin Luther King were mysteriously killed just when they were in the midst of progress.

Organizations who seek to change things for the better are often hit with law suits, tax audits and mysterious threats.

Disciples therefore must be aware that he or she not only have outward authorities of position and glamour to deal with but also invisible power brokers behind the scenes who may be impossible to identify without revelation.

“There is no Sanskrit word for which the direct transliteration into the English language is Evil. Therefore, the translation of the Buddha teachings you quoted is misleading.”

Unfortunately, I do not have the original Sanskrit available to check this out, but I will give you this. The concept of the religious ones today toward the word evil and numerous other Biblical words is quite a bit different from the original use thousands of ears ago. I’m sure this is also true of Buddha’s words.

Even so, when you examine the teachings of Buddha it becomes quite obvious that he often spoke of the dualities of good and evil quite consistent with the other world teachers. All the translations I have seen of Buddha’s teachings have him speaking of both good and evil with about the same fervor as the early Christians. Perhaps Buddha did not see evil in the same light as a fire and brimstone preacher, but it was still the most equivalent word that these experts in the language were able to find.

The quotes I posted the other day had numerous references to the concept and these were translated by Dr. Harischandra Kaviratna for the Theosophical Society.

This was in the introduction:

“Dr. Kaviratna, a native of Sri Lanka, is equally versed in Sinhalese, Pali, and Sanskrit, and since youth has been a dedicated researcher into the esoteric implications behind the Vedas, Vedanta, and Buddhist canonical and noncanonical literatures of both Northern and Southern Schools.

This quote from his translation gives a pretty standard view of good and evil:

But here is one I find quite interesting:

“ It is quite easy to perform evil deeds which are not beneficial to oneself. But it is extremely difficult to perform a deed which is righteous and beneficial.

“If an evil-minded one, by reason of his false views, reviles the teaching of the Arhats, the Noble Ones, and the virtuous, verily he brings forth the fruit of his own destruction, even as does the katthaka reed.”

The interesting thing is that Buddha talks of evil here as a negativity which can bring “destruction” This is a very close harmony with RA, the biblical Hebrew word for evil which means “to break into pieces,” or to destroy.

Another translator, Paul Carus, used the word evil regularly in translating his words. Here is an example:

“All acts of living creatures become bad by ten things, and by avoiding the ten things they become good.

[1] “The evils of the body are, murder, theft, and adultery; of the tongue, lying, slander, abuse, and idle talk;

of the mind, covetousness, hatred, and error.

[4] “(2) Steal not, neither do ye rob; but help everybody to be master of the fruits of his labour.

[6] “(4) Lie not, but be truthful. Speak the truth with discretion, fearlessly and in a loving heart.

[7] “(5) Invent not evil reports, neither do ye repeat them. Carp not, but look for the good sides of your fellowbeings, so that ye may with sincerity defend them against their enemies.

[11] “(9) Cleanse your heart of malice and cherish no hatred, not even against your enemies; but embrace all living beings with kindness.

and be anxious to learn the truth, especially in the one thing that is needful, lest you fall a prey either to skepticism or to errors. Skepticism will make you indifferent and errors will lead you astray, so that you shall not find the noble path that leads to life eternal.”

Now it may be true that the original Sanskrit word may have a deeper meaning than the modern English – evil – but the opposite of that which is good is certainly implied by the context.